Ever since Robert Pattinson began sporting that perfect, poofy James Dean coif in Twilight, “vampire” has become the buzz word in the entertainment world.

But what is it about these pale and blood-thirsty creatures of the night that so turns women on? SheKnows investigates why we’re such suckers for these sexy blood-suckers … 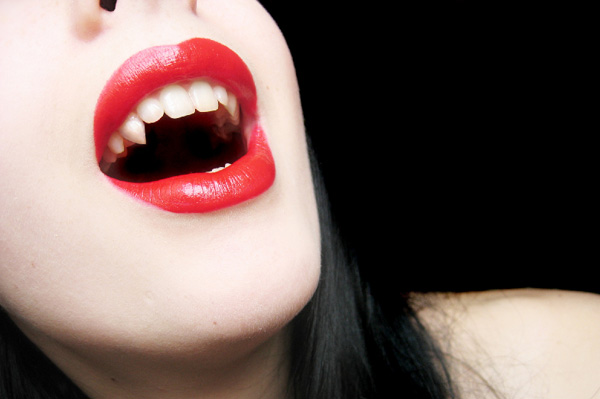 Everyone has gone gaga for Edward Cullen. Is it the charming good looks of the Robert Pattinson, who plays the character in the hit book-turned-movie Twilight? Perhaps, but experts have another theory: the vampire attraction. Surely, you know the tale of Dracula — even he had special powers with the ladies (and he wasn’t even that cute). So maybe theorists are onto something.

So what’s with the vampire attraction? Here are four reasons that may explain why women are into these dangerous men…

Lauren Mackler, author of international bestseller, Solemate: Master the Art of Aloneness and Transform Your Life, points out that vampires represent and embody the parts of people that are often submerged, especially in women, like unbridled emotion, sensuality and sexuality. From forbidden pleasures to rebellious behavior, some women can’t help themselves. “In the unconscious quest for wholeness and reclamation of our ‘lost parts,’ [some women] are attracted to people (vampires) who embody what we are missing,”Mackler explains. “Another driver of this attraction is women’s biological imperative for men to take command of their natural male energy and power (think cavemen).”

“It seems very romantic in fantasy for a woman to be controlled by a man, but in real life, control leads to abuse,”says Tina B. Tessina, PhD (a.k.a. “Dr. Romance”), a psychoterhapist and author of The Unofficial Guide to Dating Again. “The fantasy of not having to be responsible is very attractive to certain women.”Although this notion is often connected to insecurity and feeling incapable of handling life on its own turns, many — men included — long for someone to take care of them and make life easy from time to time. “But people who feel competent and capable don’t like the feeling of being controlled,”Tessina adds.

Fear can produce chemicals in the brain that morph into excitement. And judging by the fan reaction to the Twilight saga, we can see how it thrills women more than men. “[The saga] represents a connection between sexuality and danger — perhaps even a connection between sexuality and brutality,”says Beth Felker Jones, author of Touched by a Vampire and assistant professor of theology at Wheaton College. “The allure of vampire romance is always dangerous, even life-threatening, even if the vampire is portrayed as ‘good.'”

In saying this, Jones can’t help but be struck by the many parallels between Bella and Edward’s romance in Twilight and the characteristics of an abusive relationship. “Warning signs of abusive relationships include possessiveness, jealousy, isolation from friends and family and controlling behavior,”she points out. “Edward, as vampire-hero, exhibits all of this and more. He takes pieces out of Bella’s car so she can’t visit a friend, he watches her sleep, and she’s willing to erase herself for the sake of their relationship.”Sounds crazy, doesn’t it? Even still, women fall victim to this situation all the time.

… and by that, we mean, they are attracted to men with issues. Some ladies are self-destructive and seek out partners who need fixing. It’s important to remember that a good relationship shouldn’t be about a fantasy, danger or destruction. In Jones’ book, Touched by a Vampire, she challenges readers to see that it’s okay to want intense love and passionate desire, but that doesn’t mean love should destroy us. “God offers us the most intense kind of love, but in that love, we find that God wants good things for us, as well,”she says. “We don’t have to turn to dangerous romances to feed our longings.”At the end of the day, there are better options.