After a few years of knockin’ da boots, sex can settle into a routine. Obvious fact of the day: routines are boring! Want to feel like a hormonally hopped-up teenager again? Master the element of surprise. Here’s how spontaneity can save your sex life. 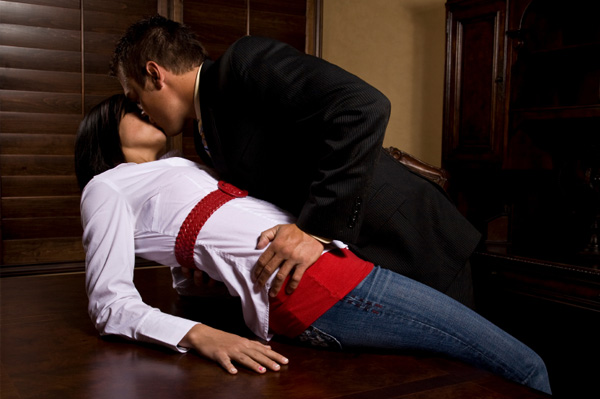 Don’t believe us? Bayer, a pharmaceutical company, did a study a couple of years ago that uncovered that men want similar things to women when it comes to sex — and that is to communicate more with their partners, give them more pleasure and be more spontaneous in their sexual relationships.

In addition, a different study conducted in Australia found that, out of 800 Australians, 75 percent of men said spontaneity as an important part of sex. By the same token, 90 percent of women favored spontaneous sex over planned intimacy.

So before you start planning when and where you and your partner are going to make whoopie, think again. For instance, don’t wait to finish dinner, just go at it before you’ve even had the main course (if you’re having dinner at home, of course). Here are some other spontaneous approaches to sex …

Thinking about when and where you and your mate are going to do the deed kind of sucks the fun out of it. Everyone knows that spontaneous events are more fun than the planned ones. Think of it as going to see a really good movie. If you think about all of the ins and outs, expectations form and become larger than life. When you finally see it, it’s not as good as you thought it was.

Show up at his office for a lunchtime quickie or drop in on him while he’s taking his morning shower. He’ll never see it coming, so when you finally initiate and put yourself out there, he’ll be thrilled. OK, so this takes a little bit of planning on your part, but the idea is you’ll be having fun sex when you both would least expect it.

Do It in a Public Place

You may be breaking the law with this fun tactic, but if you’re careful, the rewards are quite nice. Try stopping somewhere during the drive home from dinner and have a little session in the car. Or perhaps you and your mate can catch a bad movie no one is going to see on a weekday — odds are you’ll be the only two in the theater, which will give you enough privacy.

Wake Him Up in the Middle of the Night

What’s more spontaneous than interrupting a good night’s sleep? Wake him up with the art of seduction in the middle of the night. It’s totally unexpected. Let’s just hope your man isn’t the type to be cranky when he’s sleeping. If he is, maybe you should just wake him up in the morning an hour or so before your normal wake-up time. It’s not as exciting, but still accomplishes the idea of spontaneous since it’s not the typical bedroom romp a little after dinner and before you go to sleep.

Play Hard to Get

Next time he tries to initiate or asks you for some bedroom fun, play hard to get. Bring it back to the time when he was still trying to woo you. Say no at first and make up an excuse. When he thinks all hope is lost, then give in as if you’ve had a change of heart. Okay, so it’s a little deceptive, but it will make for a good time for both of you in the end.

Remember when you and your mate, at the beginning of your relationship, would never leave the bedroom? It was like one romp after another. Somewhere along the way, you both became one-time shows. We realize everyone is busy and there are lot of things to do around the house, but you have to make time for intimacy. Revive that “new sex” you started with. Make love once, lay around and relax, and if the mood strikes you, make love again.