Being in the dating game leaves a lot of room for error. As in, you may pick the wrong men. Some are great, don’t get me wrong. But many are players. We’re not saying that you should stop your search right here and call it a day. You deserve to find Mr. Right. However, when looking, be cautious, know the signs, and stay away from the infamous player type. 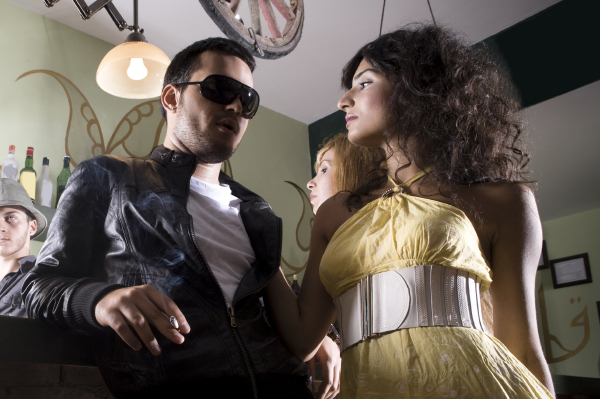 How can you spot a player?

“Boys who are nice guys don’t have to say they are nice guys,” says Jose, who admits he’s not always a nice guy. “Sometimes, I have to put it out there that I’m good–they might be able to tell
because there is gossip about me out there. I’ll be the first to admit, I’m not always a ‘nice guy.'”

Beware, ladies, there are more Joses around. They’ll tell you they’re nice, when in fact, sometimes they’re not. When it comes to boys who are just like Jose, proceed with caution and remember,
actions speak louder than words.

What is he trying to hide? Men who wear sunglasses indoors or when it’s not sunny might have a hard time looking you in the eye–probably because he may not be telling the truth, says Aly, a
relationship expert. “You can often tell if a guy is lying by his eyes,” she says. “If you ask him a question, and you notice him look away or not be looking at all, you have every right to
question if what he’s saying is for real.”

Everyone says he is a player

If one or two people say he’s a player, it may not be true. However, if there are enough people out there in the world who claim he’s sinister, you can trust that he probably is.

“There’s something to be said for crowd-sourcing,” say the experts at The Frisky. “If countless people
— especially without asking — tell you a dude is a player, he probably is one. And if he’s not, and all those people are just trying to ruin his reputation, he probably has done something to make
him worthy of so much distaste. And once you’ve decided he is a player, don’t fool yourself into thinking you’ll be the girl who changes him. You won’t be.”

Sure, give him the benefit of the doubt, but gossip and stories might have some truth behind them. It’s important to follow your instincts on this one because truly nice boys will seldom have
gossip about them out there. If anything, girls and boys alike would be vouching for him.

Just like in the movie He’s Just Not That Into You, beware of Myspacers (or other strangers who e-mail you on various social networking sites). Whether it be Facebook or Friendster, some
men who e-mail you on said sites might be copying and pasting the same lines to other women.

“I’ve been a victim of this,” says Annie. “This guy e-mailed me on Myspace and told me I was beautiful, yada yada yada. We went out a couple of times then I realized he was a serial online dater.”
Stick to guys who are about quality, not quantity. The player is the type to go through many women and dates without substance, instead of concentrating on the ideal.

He’s too good to be true

People have flaws–they’re supposed to. No one is perfect, so if that guy you’re dating is way too perfect, you can pretty much assume it’s all an act. Part of being in a relationship is embracing
someone’s flaws anyway. If he didn’t have any, one’s got to wonder if he’s just putting his best self forward to you … and perhaps to plenty of others. “Players are smooth talkers,” says Aly.
“They’ll tell you what you want to hear and be what you are looking for, but when it comes down to a lifetime together, they’ll eventually show their true colors. Keep your eyes open for the guy
that’s way too good to be true.”

9 hrs ago
by Charyn Pfeuffer