A few months ago, I ran into an ex at a bar. I was floored, unprepared and practically frozen. For a brief moment, I was able to get some words out. They sounded a little something like, “Hi! How are you? Great? Good. Thanks. Bye.” In retrospect, I wish I handled the moment more coolly, calmly and way more fabulous than I was. 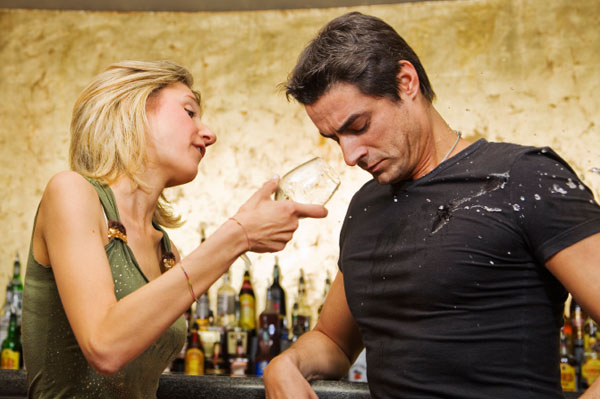 Why, you ask? Isn’t the answer obvious? This man broke my heart. I’ll be damned if he has a lesser-than-amazing impression of me. Not that I still want to be with him, of course, but I would love
to live the rest of my life knowing that he knows exactly what he’s missing. I’m sure you all could relate.

So if you ever encounter the ever-so-intimidating moment of running into an ex, handle it the right way. And by “right,” I mean be as awesome as possible and make him feel less than awesome. Ready
for the dos and don’ts?

This sounds pointless, I know, but it will play a part later. Wait ’til you read the rest of the tips. The idea here is be super great without being prepared and make it look effortless. The moment
should go as follows: “Oh, hi. How are you?! It’s been so long – it’s so crazy to run into you here.” Translation? “Hey. How are you? I don’t really care what you’ve been up to, but let me
act like I had no idea you were going to be here nor do I care.” And the last part (“crazy to run into you here”) is a bit of a backhanded compliment, especially if you’re at a fabulous joint like
an A-list party, like you’re surprised you two run in the same fabulous circle.

This should be easy—odds are, you already are fabulous. When he asks you, “What’s up?” Just answer: I’ve been amazing, fabulous or fantastic. “Don’t forget to add details to your answer,”
adds Allie, who’s all about maintaining one’s fabulosity single or not. “I’ve run into exes before and the little tidbits make a difference.” Without specifics, your “I’m fabulous” answer won’t
resonate with your ex. “He’ll just walk away and you would have made no impact,” Allie says.

Don’t Lie or Overdo It

“I’ve made the mistake of making up stories when I saw an ex while I was out with friends,” says Carol, who claims to not care about exes but is clearly lying to herself. “To be honest, I didn’t
know what to say so I turned to fibs.” The only snag? Carol’s ex-boyfriend later found out that she had lied. It somehow got back to Carol and she still regrets the moment to this day. “I don’t
care about him, I don’t,” she explains, “but I don’t want to be known as the town liar.” Now, Carol’s ex is probably thankful that he’s no longer with a girl who makes up stories for no reason.

Don’t Take Anything He Says Personally

Be prepared, ladies—your ex might be following these same dos and don’ts we’re suggesting. Two can play this game, after all! Don’t take anything that he says too personally during the
conversation or after. If you’re face to face with your failed love and he starts making you feel less than fabulous with his stories, realize that he might be fibbing, exaggerating or merely
trying to get a rise out of you. Don’t let him win! Act like you don’t care no matter how much what he’s saying bothers you, and don’t forget to get your “I’m fabulous” approach.

Once the brief conversation is over (and yes, please keep it brief to avoid awkwardness), end the encounter. “Just like any failed attempt at a relationship, it’s good for you to be the one to walk
away,” says Shawna, who admits to having been through one too many breakups. “To me, being the one to have the last word is so much better than being the one standing there and being walked away
from.” After you get your last “fabulous” point, say, “Well, it was nice seeing you. I have to get back to my [fill in the blank that has to do with doing something super-exciting or cool].” Then,
smile, walk away and don’t look back. He can see your fabulous behind on your way out.

As significant as we think these tips are to follow when it comes to running into your exes, it’s also super-important to know why you’re following this advice. Don’t do it for him (as in, to get a
reaction from him or to win him back), do it for you. You truly are amazing—we’re sure of it—now don’t let him forget it.

Got Maskne? Expert Advice on How to Treat & Prevent Face Mask Breakouts

This Newly Approved Contraceptive Gel is Not Your Momma’s Spermicide

Caregivers Are Experiencing a Mental Health Crisis During the Pandemic

Common Fights Couples Have That Are Totally Normal

Expert Advice on Boosting Your Immunity In Your Sleep