Morning sickness can be one of the hardest things to deal with during pregnancy. The nausea and vomiting can feel inescapable and overwhelming. On the bright side? Recent research published in the Journal of Pediatrics suggests mothers who suffer from morning sickness are more likely than their non-nauseous counterparts to bear brainy babies. Keep reading to learn how morning sickness may mean a smarter tyke. 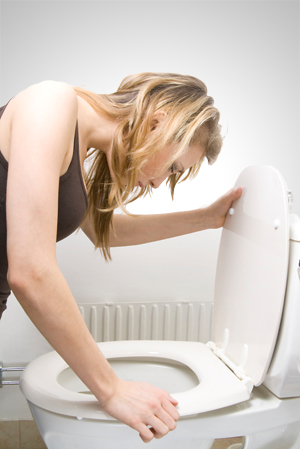 What is morning sickness?

Nearly 100 percent of pregnant women will experience morning sickness at some point during their pregnancy. Many moms-to-be experience symptoms in the morning, others deal with it all day long. The condition usually begins with bouts of nausea and vomiting around the second or third week of pregnancy. It can last through the second trimester. In some women, symptoms can become very serious (leading to weight loss, dehydration and even hospitalization), while in others, it is just a passing annoyance.

No one really knows why morning sickness can hit one woman harder than another. Research suggests it may have something to do with the hormonal changes a woman goes through after conception. Others say it could stem from what a woman eats, when she eats and how her body and her baby digest the nutrients from her food.

A new study conducted by Toronto’s Hospital for Sick Children (a leading research facility and hospital in Canada) has shown normal, non-severe morning sickness can actually be good for a fetus. It has long been believed that morning sickness is a sign of a healthy pregnancy (women who experience it are less likely to miscarry and less likely to have babies with congenital cardiovascular problems). This study adds a new dimension: neurological development.Over 120 pregnant women who experienced morning sickness were surveyed by the hospital. When their children reached three to seven years of age, the kids were then given age-appropriate psychological tests to measure intelligence. The study found that children who were born to women who experienced morning sickness symptoms had a higher IQ, better verbal skills and a stronger memory than children who were born to mothers who didn’t report morning sickness. This is the first study of its kind to examine the long-term outcomes of prenatal nausea and vomiting.”Women suffer for it, but at least it’s for a good cause,” says Dr. Gideon Koren, the principal investigator of the study. “It’s the hormonesâ€¦ that cause you to feel yucky, but on the other hand, they probably confer better conditions for the baby.”

Ways to deal with morning sickness

2 hrs ago
by Cheryl S. Grant

4 hrs ago
by Ashleigh Morley