We have so many questions for men regarding what they think of us, why they act the way they act, and how do they make decisions. From broad issues (such as, why are most of you scared to commit?) to personal inquiries (like, why have you stopped wooing me?), I’m determined to get to the bottom of it all. Baby steps, girls, baby steps. We won’t get all of the answers overnight by sitting around pondering. In an effort to gain some clarity, I went straight to the source: a man. And here’s what I uncovered… 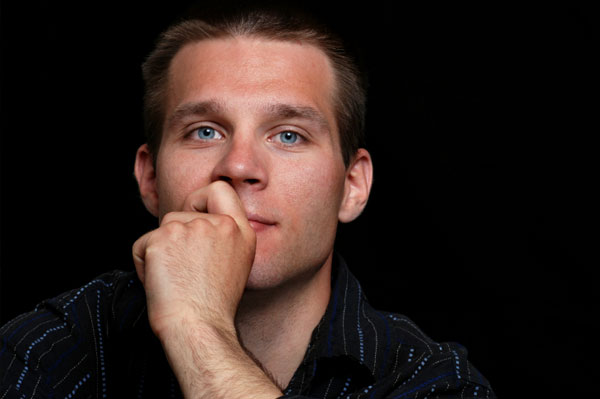 My Question: Why are most men so afraid of commitment? And, if there’s such a fear present at the thought of becoming attached to another human being, then why date at all?His answer: Honestly, I personally don’t know what I’d gain by committing to anyone. If you want to talk about gender roles, well, I do all that stuff already — cook, clean, iron, etc. Plus, I don’t need a woman on my arm to feel validated. Not to mention, I’ve got awesome platonic friendships with a number of women, and they’ve all raised the bar for what I’d expect from a serious, long-term relationship.My Conclusion: Had I known a relationship equaled me cooking, cleaning, and ironing for a man, I would’ve stopped dating a long, long time ago. Is that what men think a commitment is about? Gender roles? How about the idea that two people should love each other and ask nothing of each other, other than companionship?As for this man’s ownership of “awesome platonic friendships with women who’ve raised the bar,” here’s a thought, have you ever considered dating one of them? If they’re so awesome, perhaps you should look closely — maybe that’s what a commitment should be about? An awesome, platonic friendship with a woman who has raised the bar.

My Question: We’ve seen it happen to the smartest, most put-together, strongest women. Why do you, men, drive some of us, innocent women, crazy?His Answer: In my experiences women are generally smarter and more capable than the average guy, so it confuses me that you all get so twisted up. Men can compartmentalize, so one problem (for instance, with a woman) can be put aside while we go to work and help us stay sane.My Conclusion: So he admits it — we’re smarter and more capable! Good answer.

My Question: I’ve dated so many men. The relationships have all started the same — they are near perfect in the beginning and romance me, then after a couple of weeks or months, the wooing stops. What gives? Don’t they like me as much as they did when we first started dating?His Answer: [Shrug] I’m the wrong person to ask since I’ve never successfully dated someone I went out of my way to woo. The women I have been with, I didn’t have to woo. They all have had irrational fixations on me.My Conclusion: Oh geez — it’s worse than I thought. As confused as we are that they’ve stopped wooing, men are even more bewildered what wooing is! Judging by this man’s answer, I’ve come to the realization that the charming courtship I’ve experienced early on wasn’t wooing at all — they were isolated incidents whereby there was no cause or reason on his part. He didn’t even know what he was doing! The wooing, as it turns out, was a mere fluke.

On the Perfect World

My Question: In your “perfect” world, what would women do differently?His Answer: If a commitment is what you want and he can’t give it at the moment, freeze your eggs while you’re in your prime. Eliminate that fear of marrying and conceiving at an older age. Or, date older guys who are ready for kids.My Conclusion: News flash, it’s not that easy. Freezing your eggs is costly. The fear of marrying and conceiving at a certain age is detrimental. Waiting too long can mean you never have that family you’ve always dreamed up. As for dating older men who are ready for kids, I’m sure some women are considering just that. At either case, this answer has terrified me.I can’t help but say that my final conclusion leaves me a little nervous. If I ever come in contact with a man who thinks this way, I will head for the hills — no question. Thankfully, not every man thinks like this — I am certain of that. In fact, some are probably the opposite. Many are okay at committing, a lot make the conscious effort to woo and woo continuously, and plenty know exactly what us, ladies, are thinking. I mean, how else would so many awesome women walk down the isle? Have hope, ladies, there are winners in the pool!

Learning to Read Tarot Totally Transformed How I Approach Self-Care