You know when to swap mayo for mustard, or to use milk instead of cream, but there are dozens of other ways to cut at least 100 calories from your daily diet routine. Here are 50 of our favorite calorie-cutting tricks. 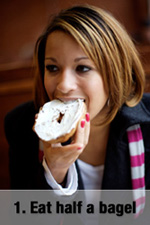 1. Only eat half a bagel (and try to reach for multigrain options, you’ll feel fuller, faster).

2. Orange juice is good, but eating an orange is better.

3. Reach for turkey bacon or sausage instead of the regular kind.

4. Hold the butter when you order pancakes or waffles.

5. Dab the grease off fried foods (you’ll cut up to 30 percent of the food’s calories!).

6. Eat the smallest muffin in the bakery (or, better yet, reach for an English muffin).

7. Thicken cream sauce with low-fat or evaporated milk instead of cream or butter.

8. Eat poached eggs instead of ones that are fried.

9. Use fat-free or low-fat cheese wherever possible (and reach for stronger cheeses, you’ll feel more satisfied because of the flavor). 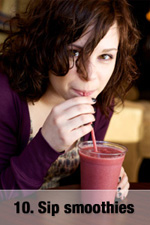 10. Sip smoothies (with yogurt) instead of milkshakes (with ice cream).

11. Use dilled relish and yogurt (instead of mayo) to make tasty tuna or salmon sandwiches.

12. Use smaller plates and utensils (you’ll eat less but your brain will think you’ve had more).

13. Reach for no-calorie sweetener instead of sugar.

14. Eat slower (you’ll feel fuller, faster and will eat less as a result).

15. Trade two Oreo cookies for a sheet of graham crackers.

16. Chew gum as you cook (it will deter you from snacking).

17. Eat Halloween-sized candy bars instead of full-sized ones.

18. Do as the French do: eat open-face sandwiches (you’ll cut your bread intake in half).

19. Sprinkle fresh lemon and some salt and pepper over your salad instead of oil or cream-based dressings. 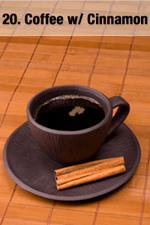 20. Use cinnamon or nutmeg to sweeten your coffee or tea instead of honey, sugar or syrup.

21. Nix putting croutons on your salad.

22. Eat grilled chicken pizza instead of a slice covered in pepperoni.

23. Top grilled veggies with fresh herbs and a little olive or seame oil instead of butter.

24. At your friend’s birthday, reach for a middle-sliced piece of cake (there’s less icing).

25. Add fresh berries to your cake or pie instead of ice cream or sorbet.

16 Surprising Things You Can’t Do While Pregnant

You’re Telling On Yourself With Your Pandemic Holiday Weekend Photos

Netflix’s 365 Days Shows Explicit & Non-Consensual Sex. How Can You Talk to Your Teens About It?