You love your guy. He loves you. But do you wonder if he still wants you like he did when your romance was new? After you pull out a bunch of these tricks, he sure as hell will. 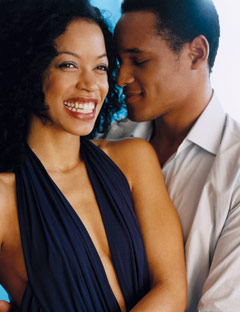 Sure, you want adoration, respect, and the occasional sparkly treat from your man, but more than anything, you want to feel like he’s still got the hots for you. Well, here’s good news: Contrary to the widely held belief that men lose interest over time, experts now know that guys are actually hardwired for long-term lusting.

“It’s absolutely true, but it’s not without conditions,” says Jeffrey Bernstein, PhD, author of Why Can’t You Read My Mind? “You have to make a strategic effort to trigger that craving in him once you’re in a relationship because the spark in your bond won’t last if you neglect it.” For that reason, Cosmo has discovered the seven key make-him-ache-for-you strategies that specifically jump-start your guy’s desire. Be warned: Once you use them, he’ll be sticking to you like white on rice.

1. Utter the One Word That Drives Him Nuts

As lovey-dovey as pet names make him feel, they still don’t compare to the electrifying rush your man gets when his name crosses your lips. “Just hearing it is an aphrodisiac,” says body-language expert Eve Marx, author of Read My Hips. “It ratchets up his desire because the message you send is ‘It’s you I’m thinking about and no one else.’ And men need to hear that — it’s tied to their primal urge to beat out all the competition.”

However, just blurting out his moniker as often as possible isn’t going to do it for him. You need to make it count. For instance, when you’re feeling sexy in a public setting, like in a dark bar, drop it into conversation in surprising spots and pause for a beat or two: “And then…Jeremy…I slammed the door behind me.”

Or try another trick when he’s putting the moves on you: Just kind of coo his name to draw his focus entirely on to you. “When Jake and I are getting it on, sometimes it feels like he’s lost in his own head,” says Sandrine,* 26. “But when I moan his name, everything feels like it gets more intense between us, like it brings him into the moment.”