You’d never buy a car without test-driving it first, right? So why settle into a lifelong marriage before trying one on for size? 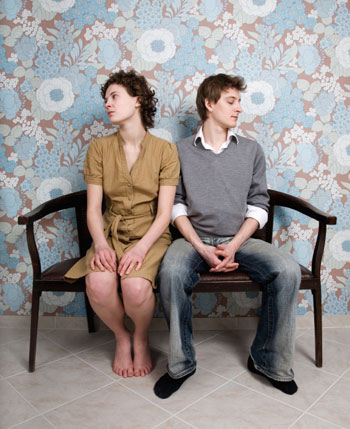 “I’m just really not ready to be committed like this.” That’s what Andi said to Tucker, her husband of 11 months, after she came home from a crazy day at work two years ago with an overwhelming urge to quit her marriage. Today. Right now. “This just isn’t for me.”

She spoke stoically — no tears, no histrionics. She had been imagining this moment since she moved out of their condo a few months earlier, but she wanted to ease him into the inevitable — to somehow tiptoe her way through the minefield of Tucker’s emotions. But now, having scored a direct hit with those crushing words, she watched Tucker crumple against the dining-room table. “I don’t understand,” he said, over and over. “We’re married

“Look, we can do this now, or we can do this five years from now when it’s a lot messier,” Andi said, softening her voice but not her position. “I want a divorce.” The guy didn’t really do anything to deserve this, she thought, looking at Tucker’s ashen face. He must think I’m a monster. Watching her husband shuffle to the door of her temporary apartment, Andi felt awful. But mostly, she felt unbelievably relieved.

“I was married for, like, two seconds.” That’s what Andi says to me today, her enormous kohl-rimmed blue eyes crinkling as she recounts her drive-through union. “It was literally an entry-level marriage.” We’re sitting in a cafe in a funky Boston neighborhood known for its liberal attitudes and alternative lifestyles — this is where gay couples raise their children — and yet women are actually swiveling in their seats, doing indiscreet 180s to get a look at the impeccably coiffed, blonde-haired woman saying such things.

Hearing her words, I flinch slightly. We’re talking about an event that’s supposed to be a turning point in life, and she sounds so cavalier. And yet, Andi is only articulating what the one in five women under age 30 who get divorced every year must think.

After graduating from college, Andi jetted off to culinary school in Paris, then switched to journalism, where she climbed the ranks, moving from one semiglamorous job to the next — all the while hooking up, dating, dumping, and moving on. She’s a perfectly modern gal, a gorgeous mess of neuroses and contradictions — the kind who never pictured herself married by 27, divorced by 28, and remarried with two toddlers at 35.

But along the way, she met Tucker. “He was what I was supposed to marry. He was what everybody else in my life wanted for me and what the world tells you you’re supposed to want,” she says. “I got sucked into the idea. I was in my 20s, and I felt like there was so much pressure from my family to find the perfect person. I just felt like, God, I’d be stupid if I didn’t do this.”

Within months of promising to love and honor and cherish Tucker forever, she knew she had made a huge mistake. The problem? He was boring. “Wholly uncomplicated,” as she puts it. The kind of guy who reads Tom Clancy books on the couch and watches Adam Sandler movies while dreaming of white-picket fences. Going to depressing French movies, leapfrogging over the less ambitious on the company ladder — those were the things that excited Andi. “The idea of spending my life with someone like that seemed stifling,” she says. “It finally just got to me that he was so … sunny.”

I hoist my drink in that you-go-girl kind of way, but I’m struck by her casual disregard for the institution. Marriage used to be a big deal. How could she slip in and out of it so easily? She’d plodded along for nearly 12 months, passive-aggressively avoiding her relationship by consuming herself with the restaurant openings and black-tie benefits that were part of her job. But then Tucker started talking about having children. “To me, once you have kids, you can’t get out,” she says. “When he began asking about a family, I felt like that was too final of a commitment. That’s when I had to say, “Okay, I’ve got to fish or cut bait here.'”

Her own parents split up when she was 3, and she didn’t want to condemn another generation to that hell. Andi and Tucker got divorced almost a year to the day after they had vowed to be together forever.

Andi takes a throaty slug of her second raspberry martini, picks at her fish taco, then sits back in her chair. “I think marriage is the new dating and having kids is the new marriage,” she proclaims loudly, as yet another woman dining with her partner turns to stare. “It’s true. I wouldn’t have married him if I didn’t think I could get out of it.”