It’s (surprise!) the little things. Learn how to make the steak of his dreams, play poker like one of the boys – and 11 other moves that’ll super-glue your marriage. 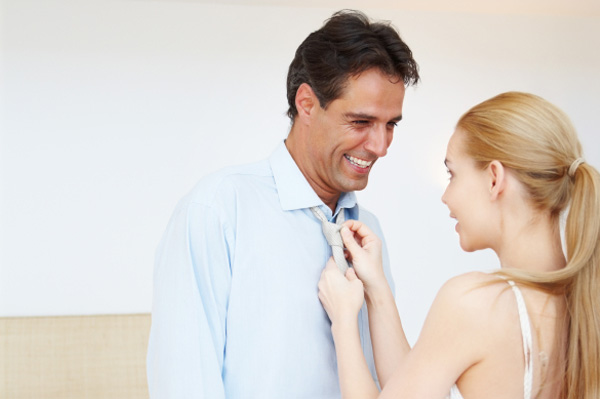 So far you’ve gotten along just fine as a wife, riding on your considerable skills as a lover, best friend, and career adviser. But why sit still? Why not, instead, be a surprising, fun, smart, knows-it-all-does-it-all wife who just blows him away with her wonderfulness? Sound exhausting? Guess again.

REDBOOK has compiled an essential list of wifely skills guys love — along with easy secrets for mastering them from the experts who should know. Learn each at your leisure, then spring them on him gradually, adding layer upon layer of, well, awe.

Oh, and by the way, here’s what’s in it for you: a totally content and grateful husband, a more playful and interesting marriage, and the proud feeling you’ll get every time you take on a new challenge — and triumph!

Why: So you can socialize his way for a change.

How: The most popular home version of this casino classic is seven-card stud, says Debbie Burkhead, a professional poker player in Las Vegas. How it works: The dealer gives each player three cards, two of them facedown (you can look at your own). You place your first bet this round, “seeing” (matching) or “raising” (increasing) the previous bet, depending on the quality of your hand. (If it’s really bad, you can “fold,” meaning that you opt out of a hand.) After a round of betting, each player gets another card, until all players either have folded or are holding seven cards. The winner of the pot is the player with the best five of seven cards.

So how do you know how good your hand is? Hands rank as follows, from best to worst; each hand beats all the hands listed below it. The higher your cards in any given hand, the better; aces are high, deuces (2s) are low.

Give the perfect backrub

Why: Because there’s more than one way to make a guy moan in complete and utter satisfaction.

How: Make him putty in your hands with these tips from Roberta Rolnick, spa supervisor at the Ojai Valley Inn and Spa in California.

Set the stage: Dim the lights, put on calming music, and light some candles. Then have him lie down on a mat (since it’s firmer than a bed).

Tie his tie for him

Why: Because it’s such a sexy, retro, little-wifey move.

How: To make the classic half-Windsor knot, says Lino Zanella, a salesman at the fabulously fashionable Louis Boston fine-clothing store in Boston, hang the tie around his neck, with the narrow end on his left side and the wide end hanging down about twice as long on his right side. Cross the wide end over (to his left), under (to his right), and then back over the narrow end. Now pull the wide end up through the opening at his neck and down through the loop you’ve just made. Tighten the knot, but not all the way. Putting your thumb or forefinger just below the knot, make that small, sexy dimple you’ve seen on men of style, then pull the knot up to his neck and tighten it.

Why: That hulking slab o’ beef appeals to his most manly side.

How: Go for a porterhouse cut of USDA prime beef. Because it’s part filet and part sirloin, you get two super-rich cuts in one, says William Rice, author of Steak Lover’s Cookbook. (You’re most likely to find it at a butcher shop.) “Make sure it’s cherry red,” says Rice. “The less red a cut of steak, the drier it will be.” Also, look for a cut with flecks of fat throughout and with close-trimmed white fat around the border. (Hey, he doesn’t eat like this every day.)

Sprinkle one side of a 1 3/4-pound porterhouse steak with 1/4 teaspoon freshly ground pepper and 1 tablespoon chopped fresh thyme; pat the seasonings into the meat. Coat a plate with 1 tablespoon vegetable oil and place the steak, seasoned side down, on the plate. Sprinkle 1/4 teaspoon freshly ground pepper and 1 tablespoon chopped fresh thyme on top of the steak and drizzle with 1 tablespoon vegetable oil; let stand at room temperature for 30 minutes. Lightly coat the bottom of a cast-iron or other heavy-bottomed skillet with vegetable oil using a paper towel. Heat the skillet on medium high until hot. Place the steak in the skillet and cook 5 minutes; turn and cook 5 minutes more for medium rare, or to desired degree of doneness. Let stand 5 minutes and then slice.

Wake him up in the morning

Why: So he’ll start his day with a smile — at the very least.

How: To hand your man a sexy surprise one morning, Gregory Godek, author of 1001 Ways to Be Romantic, suggests taking off that supersize T-shirt and slipping into a satiny nightie. Then climb back into bed and start nuzzling his neck, rubbing his back, maybe landing a few butterfly kisses (softly flutter your eyelashes against his skin) on his cheek. As he crawls toward consciousness, murmur, “Open your eyes: I’ve got a surprise for you.” Just make sure you turn off the alarm; you’re not going to want any interruptions after that.

Give him a barbershop shave

Why: He’ll get a sexy little thrill from letting you wield all the power while he submits to your capable hands.

How: Give it to him the way some of the most powerful men in the country get theirs — at Senate Hair Care, next door to the Capitol building in Washington, DC. The shop’s manager (who discreetly declined to disclose his name) says: Recline his chair or have him lean back in a comfy easy chair (place some towels on the floor, unless you’re planning to schlep furniture into the bathroom). Wrap his face and neck in a hot, wet towel to soften his whiskers and baby his skin; leave on until cool (some guys — senators and countrymen alike — enjoy a second towel treatment). Then slather his face and neck with lotion or shaving cream.

Now you’re (both) ready: Moving around him as you work with his razor, shave with (not against) the hair growth. Start at one sideburn and shave down to the neck, slowly working around his face. Repeat the hot-towel routine, then shave again — this time against (not with) the growth — and from the neck up. One more hot towel, please, and then a cold one to close the pores and perk him up. End with more conditioning cream or a splash of aftershave. He’ll feel smooth, pampered, refreshed, and ready for… anything.

Up next: More ways to keep your man crazy in love >>