Carrie Bradshaw stacks saltines — she puts grape jelly on them. And she eats them, standing up in the kitchen while reading the latest issue of Vogue. It’s her SSB. In case you missed that episode of Sex and the City, SSB stands for your “secret single behavior.” It’s what you do in the privacy of your own home (where you likely live solo) that no man you’ve ever dated or are currently dating knows about. 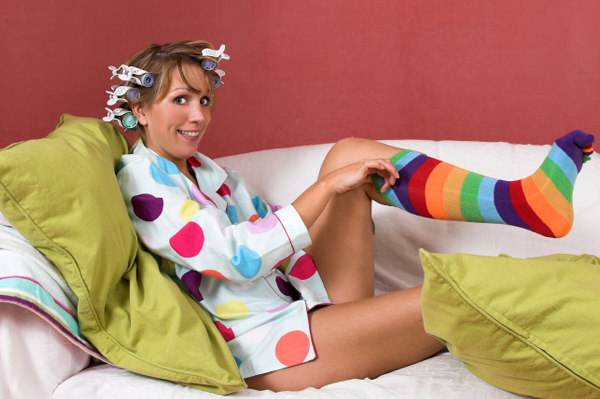 I’m sure at some point or another, you can relate. What’s your SSB? C’mon, tell us. You’ll feel better. I’ll go first — I buy steamed lobster at ShopRite once a week and eat it in my living room in front of the TV as I watch Top Chef on Bravo. It’s one of the best feelings in the world. Partly because I enjoy seafood and reality TV, but also because I’m doing it in my apartment that I pay for with my own money. That’s way better than being with some men.

These single ladies agree and reveal their SSBs:

Cherilyn laughed out loud for coming forward her with her single secret behavior. What is it? “My secret single behavior is that I’ll prepare dinner for myself and talk it out like I’m on a cooking show â€¦ to my dog, who listens intently and avidly follows me around like a camera man would,” she admits.

When Rhadika became single, she decided to change her sleeping habits. “I recently adapted something I heard on the radio,” the elementary school teacher explains. “I used to sleep on one side of the bed, but since I’ve been single and wanted to feel awesome, I throw off one pillow, put one in the middle of the bed (for my head) and sprawl on the whole bed. Just me!”

Hannah tends to pump up the jam, dance in her room, and stand in front of the mirror admiring herself. “I’m not embarrassed to have that published. Although I do keep my blinds down and get super-embarrassed if anyone walks in or peeks through the window. Still, I take precautions, but it’s so much fun!” she says. “Every night, I also have been putting pimple cream on before I go to sleep. I look hideous when I do it! It looks like I’m highlighting my whole forehead with this stuff, but it works.”

Krista, an outgoing fashionista, says she has more than one SSB, too. “I eat Chinese food on my couch while watching TV, vacuum up bugs, say “Hello, house!” and kiss my blankie bye-bye. Oh, I also dance around in my underwear, blow kisses at the mirror, and play dress-up.”

Gladys, a self-proclaimed obsessive-compulsive woman, had too many single secret behaviors to list here — it’s like she does everything in secret. To name a few: “Weekend mornings, I eat popcorn while IM-ing a friend and catching up on Oprah reruns,” she reveals. “I also always do a â€˜VPL’ (visible panty line) check before walking out the front door. But before I leave, I carry a current newspaper cut-out of sample sale listings in my bag at all times — you never know.”

Brianne, a PR powerhouse, owns up to her SSB without hesitation. “Once a week (when I’m alone), I put on thick overnight foot and hand cream, and gloves and socks to bed. Super sexy!”

Marie, a fitness fiend and physical therapist, celebrates her body. “I used to wear shorts, but now I exercise in my underwear. It helps keep me on the elliptical machine longer, and I like seeing my progress.”

For Anita, a business development extraordinaire, enjoys baring, as well. “I romp around naked in my apartment all day long — not that a guy would complain if he were around,” she says. “I also snuggle up with my teddy bear, and — when I’m really single — I skip on the personal grooming â€¦ Oh, is that why I’m still single?”

Creative director Jill’s single secret behavior is a little more practical than that. “When I get home late from work, I cook dinner while doing a million other things like packing my gym bag and checking my mail. Then, I eat what I just cooked — standing up in my kitchen — for about five minutes,” she laughs.

And for Dorothy, it’s all about comfort. “The first thing I do when I get home — no matter what time of day or what I’m doing later — I come home and take off whatever I wore out and automatically put on my â€˜comfy’ clothes, which consists of sweatpants and an old, beat-up shirt,” she explains. “I never walk around my house rockin’ a cute outfit if I’m by myself — unlike some girls.”So spill: What’s your SSB? Comment below — and don’t worry, you can stay anonymous!

The Wellness Trend You Should Try Based on Your Zodiac Sign

No, I’m Not Afraid of Being Single in My 40s

Where & When Should You Be Wearing a Mask in Public?

The 6 Unexpected Health Benefits of Semen