Whether it’s a broken condom or a planned event, the pregnancy question is raised by all of us at some point in our lifetime. How do you know if it’s the right time to start to worry? Check out our guide. 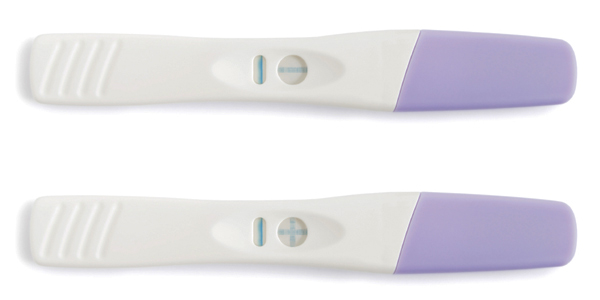 Consider before taking the test

Walking through the pregnancy aisle at the local drug store can be a daunting, nerve-wracking task. A woman wants to choose the right test to ease her anxieties about her future, but there are so many questions to ask—what kind of test, which product, when to take it? Before making your purchase, there are several elements to consider. Dr. Craig Richard, assistant professor in biopharmaceutical studies at Shenandoah University gives some insight into the human chorionic gonadotropin, or hCG (the pregnancy hormone) that may answer some of these questions.

How long after sex will hCG show?

The rate at which fertilization and implantation of an egg occurs can be crucial to the accuracy of the results of a home urine test. Assuming that the fertilization happened immediately after sex followed by implantation five or six days after—a home test can detect hCG as soon as nine days after sex, according to Richard.

However, fertilization and implantation can take much longer, and a home test can take up to 20 days after sex to detect hCG. Richards says, “The variability of hCG detection in home tests can result in false negatives if home users are not aware that a pregnancy can take this long to be detected by a home test. A home pregnancy test can detect about 90 percent of pregnancies at about the time of the first missed period.”

How accurate are early detection tests?

If you don’t know what to look for in a pregnancy test, research will show that some products have better track records than others with accuracy and consistency. With all of these chances of your body delaying the detection of hCG, you might wonder about early detection home tests.

Richards says that First Response Early Result has proved the most accurate and consistent in controlled studies. However, many inaccurate results come from misuse of the home-tests. He emphasizes that no matter which product you choose, it is imperative that you do not use it too soon, follow the directions, and follow with a blood test for your clinician.

The latest development in technology among home pregnancy tests is the new digital indicators as an alternative to the traditional line test. The question at hand becomes if these tests are more or less accurate than their predecessors. According to Richards, “There may be some potential advantages but currently they are not the most reliable, the easiest, or the most inexpensive to use.”

Melissa Martin, group product manager at First Response says that they chose to make the development based on consumer desire. User-friend words like, “Yes” and “No” are easy for the consumer to interpret. Also, they developed a test indicator that reveals if the test is properly functioning in order to obtain the most accurate results; however, these new developments do not make these tests more accurate than their line tests.