If you love yoga but are ready for a new challenge, check out these two new types of yoga offering different ways to approach your asanas. 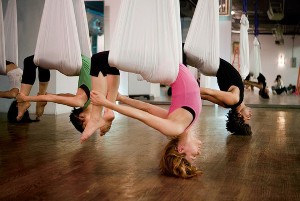 Forget the mat and the blocks — this brand-new technique merely requires a fabric hammock suspended about three feet above the ground. Climb in and swing softly as you move through poses and simple suspension techniques.

The support you receive from the hammock (which also doubles as a trapeze for some poses) lets you deepen and lengthen stretches and postures, relieve compressed joints, and align the entire body.

This antigravity concept was created by Christopher Harrison, a former gymnast who used a similar setup to practice acrobatic and tumbling techniques. He has since shifted his focus to yoga and now offers this workout exclusively at Crunch, but it may be coming to another gym near you. See the Antigravity Yoga website for more details.

Want to turn up the heat on your workouts? Step into a Bikram Yoga studio and — thanks to a balmy 105 degrees F temperature — see the sweat instantly spill from your body.

More commonly known as Hot Yoga, the added heat allows muscles a deeper stretch and speeds up blood circulation to help the body get rid of toxins.

The technique was created (and named after) yoga guru Bikram Choudhury in the early 1970s. He added the heated-room concept to mirror the climate in his native India. It has since become the fastest growing style of yoga with more than 1,700 yoga schools and 5,000 certified teachers worldwide.

Devotees swear by Bikram’s 90-minute sessions (which work through two sets of 26 distinct poses), claiming such benefits as weight loss, increased stamina, and relief from serious ailments such as insomnia, arthritis and chronic disease.

Many gyms and yoga centers offer Bikram classes. Check out the Bikram Yoga Finder to find a studio near you.