If you have spent time with kids lately (or perhaps you are just a kid at heart), then you have probably given the Nintendo Wii a whirl. The popular gaming system combines an ultra-sensitive remote with the player’s hand motions to simulate five separate sports — tennis, baseball, bowling, golf, and boxing. Playing Wii Sports is fun, wildly entertaining, and definitely works up a bit of a sweat. But is it a legitimate workout?

Not quite, but that is slated to change with Wii Fit, the latest installment in Nintendo’s ever-evolving repertoire. Hitting shelves in the United States on May 19, 2008, Wii Fit will be available for under $100.

This sweat-ready bundle of about 40 different fitness exercises and games will have you jogging down virtual mountain trails, hula hooping (see below right), ski jumping, and tightrope walking right in the comfort of your living room. Check out the video clip at the bottom for a taste of the Wii Fit features.

High-tech fitness gadgets not only motivate you to get moving, they also track a variety of fitness indices. A pressure-sensitive foot pad resembling a bathroom scale — called the balance board — lets you control your movements. The foot pad also picks up your body mass index (BMI) and can track and compare your progression with as many as eight family members or friends. 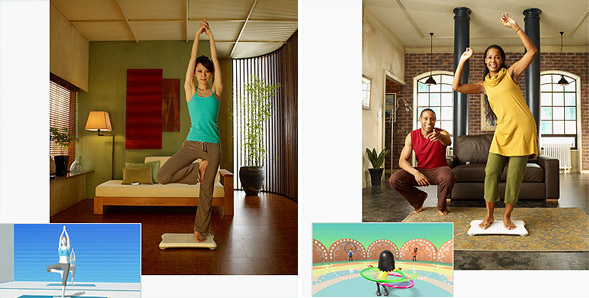 Already released in Japan, more than 1.4 million copies of Wii Fit were sold between December 1, 2007 and the end of January 2008.

Stateside, young gamers and gadget-geeks alike are ambling to get their hands on the system before its May release. But Nintendo is anticipating an even wider allure for the Wii Fit, and are reaching out to women and older consumers by advertising in mainstream magazines as well as setting up Wii kiosks in malls, cruise ships, and retirement centers.

“It’s not a game, it’s a tool to help a broad audience to get fit. That’s what drove development,” Nintendo’s Reggie Fils-Aime recently told USA Today. (If you don’t have a Wii already, you can buy a bundled version with the “game,” a balance board and the Wii itself.)

Fitness fun with other game consoles

If you just cannot wait until May, there are some established fitness-focused video games you can try on a PlayStation, Xbox or PC — although these games are not as hi-tech as the Wii Fit. However, if your last experience with video games was back in the Atari days of the 80s or Nintendo in the 90s, any video game from this millennium will blow you away!
The Yourself! fitness series, which can be played on Playstation, Xbox, and PC offers yoga, pilates, stability ball, and aerobics sessions with a virtual personal trainer named Maya.

In addition, the golden standard of video game workouts — Dance, Dance Revolution (DDR) — will get you shuffling your feet from arrow to arrow on a dance pad while following directions on the TV screen. According to the American Council on Exercise, 20 to 30 minutes worth of DDR is comparable to easy walking on a treadmill in the game’s light mode; cycling 12 to 14 mph in standard mode; and equivalent to high-impact aerobics in difficult mode.

Finally: Playing video games is good for you

This emerging trend of kinetic video games is going to put to rest the long-held notion that hours of playing video games will ruin your health and fitness.