Bulimic as a young woman, Rochelle Rice discovered a way to turn her darkness into light by developing a fitness program for plus-size women. In the US, more than 60 percent of all women are overweight, and the average woman wears at least a size 12. So shouldn’t there be fitness programs geared toward today’s average woman without pushing them to be thin, which they don’t have to be to be fit? Read more in the following excerpts from Rice’s book Real Fitness for Real Women: A Unique Workout Program for the Plus-Size Woman. 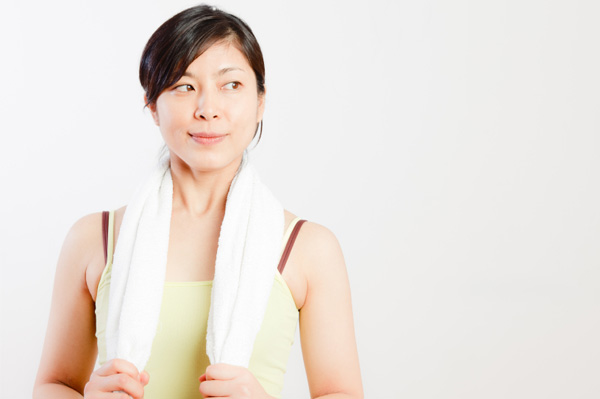 A betrayal by my body

I grew up in front of the mirror. I was a dancer from the age of 3, and with each passing year I watched myself more and more critically, scrutinizing my young form for imperfections. As my body began to develop in adolescence into a real woman’s body, I felt completely alienated by the changes of maturation: I hated my widening hips, my developing breasts, the curves that seemed to have softened my form almost overnight. I cried at the onset of my menstrual cycle. Although I was developing a normal, real, womanly body, when I looked in the mirror all I could see was deformity, in the form of fat. My body, it seemed, was monstrous, a betrayal.

By the time I was in college, I had become obsessive about counting calories and exercising. I felt I had to dance off every single calorie I consumed. I spent hours in the dance studio, practicing stretches and combinations, all the while thinking, “Just five more pounds … then I’ll be OK.” Day after day I would vow to go on stringent diets in order to purify my body of what I thought of as the visible evidence of my lack of self-control. But as time went on, I was less and less able to adhere to a strict diet. As I placed even more prohibitions on my food and eating, I began to rebel against these violent and self-punishing strictures, bingeing on all the foods I had deemed off limits. Then, guilty at having gorged on fattening foods, I would purge by forcing myself to throw up, nullifying, I thought, the consequences of my moral lapse.

I used to call it “praying to the porcelain god,” a spirit so powerful it grabbed me by the throat and choked me until the acidic juices from my stomach burned my mouth, every piece of my latest binge expelled. Tears would wash over me, a combination of relief and self-pity. One summer, at a dance camp, a fellow dancer taught me to use laxatives as an alternative to throwing up. I would binge, then swallow handfuls of these pink tablets in order to offset the size of my meal. The following day, gas pains would rip through my gut like knives. But still I went obediently to dance class, trying to maintain the facade that everything was OK.

Waiting to be rescued

Instead of dealing with the emotional issues underlying my self-punishing views of my body, it was easier to hide behind the cruel comfort of food. Secretly, like a princess waiting to be rescued, I kept hoping someone would come along and save me from the emotional dragon banging on my door.

But no one and nothing could save me, and in my self-destructiveness I virtually abandoned myself. I used to call my nightly binges “smashing and trashing.” I would tear through the kitchen like a drug addict looking for a fix, drinking and eating until I was numb. I would pass out without brushing my teeth or washing my face, having attained peace at last.

Emotionally I had hit rock bottom. The peppermint taste of Tums could no longer quell the acidic churning of my bulimic stomach, nor could any binge soothe the ache of my head and heart. Finally I reached out to a trusted friend for help, and she recommended therapy. I had been looking outside of me, externally, for comfort and safety. Every perceived solution had turned to dust in my hands. Now it was time to turn inward.

In therapy I began to pay attention to the feelings that lay beneath my eating disorder. I realized I had internalized the idea that I could never be enough — never thin enough, never smart enough, never pretty enough to be “acceptable.” Dance was my one saving grace. Despite the toxic, distorted body image issues, I had found an arena where I could express myself. Movement was the one way for me to release my soul.

Therapy also helped me become aware of the effects of living in a society in which we are bombarded every day with images and messages that say thin equals beauty and health, fat equals ugly and sick. The thinner you are, the more love you will receive. I came to understand that this diseased social thinking had affected me and women around me; women like me who were torturing themselves in vain attempts to conform to unhealthy and unrealistic ideals.

In the process of my recovery, I detonated every idea I’d ever had about beauty, desirability, and value — I had to. I wanted a life that was joyful and not ruled by pain. As my recovery progressed, I began to realize what being female, healthy and alive really meant. It meant being in tune with my body, not working against it. It meant embracing who I really was. In fact, it was through a movement regimen that my recovery took root. I continued to dance and I became a certified fitness trainer with the American Council on Exercise. The more I learned about fitness and understood about my eating disorder, the healthier I got. I wanted to share my new understanding with those who were killing themselves to meet societal pressures concerning their weight. And, most important, those treated worst in our fat-phobic culture: women of size.

Women of size are too often overlooked

I knew the statistics: Nearly half of all American women are overweight. Every year Americans spend more than $30 billion on the diet industry, yet every year the number of overweight people increases. If the average woman on the street wears at least a size 12, why weren’t any of these women members of the gym I belonged to or clients in my work as a personal trainer? Where were the real women and why weren’t they represented?

I decided to visit other gyms and health clubs to see if mine was somehow an exception, but it was the same thing again and again. Virtually all gyms and fitness programs totally ignored women of size. It was as if the whole fitness profession had labeled plus-size women as beyond help or even unworthy of fitness — at least until they lost weight! I believed a unique fitness program to help real women learn how to be fit and healthy, no matter what they weigh, was long overdue.

“Our deepest fear is not that we are inadequate. Our deepest fear is that we are powerful beyond measure. It is our light, not our darkness, that most frightens us. We ask ourselves, Who am I to be brilliant, gorgeous, talented, fabulous? Actually, who are you not to be? You are a child of God. Your playing small doesn’t serve the world. There’s nothing enlightened about shrinking so that other people won’t feel insecure around you. We are all meant to shine, as children do. We were born to make manifest the glory of God that is within us. It’s not just in some of us; it’s in everyone. And as we let our own light shine, we unconsciously give other people permission to do the same. As we’re liberated from our own fear, our presence automatically liberates others.” — Marianne Williamson

More on women’s health and fitness

Being plus-size in a skinny world
Secrets to having a positive body image
What is binge eating disorder (BED)?