When it comes to healthcare, there’s no question that everyone should have access. After all, healthcare is a right, not a privilege. However, for Black people, specifically Black people with an invisible illness such as rheumatoid arthritis, their journey to adequate care may have some bumps in the road. But first, let’s talk about health equity. Health equity is when all members of society enjoy a fair and just opportunity to be as healthy as possible. Seems pretty standard, right? Well, the data shows that racial and ethnic minority groups, throughout the United States, experience higher rates of illness and death across a wide range of health conditions, including diabetes, hypertension, obesity, asthma, and heart disease, when compared to their white counterparts. But why?

“If there’s lack of access to health care or lack of insight into medical issues, that might translate into poor care or delayed care,” says Dr. Nilanjana Bose MD MBA, a rheumatologist in Houston, Texas. It’s a story many Black patients with rheumatoid arthritis know all too well. A study from the American College of Rheumatology revealed that Black patients with rheumatoid arthritis were less likely to be prescribed a biologic treatment and more likely to use glucocorticoids, which carry a risk of serious long-term side effects.

Additionally, white patients in the study were significantly more likely to use a biologic, more advanced, expensive, and effective treatment for controlling RA disease activity and preventing joint damage. Black patients also had significantly more visits to the hospital emergency department (ED) over the eight-year period during which the study was conducted. Black patients could also face challenges with finding a healthcare provider who provides them with adequate care as was the case for Alexis Mobley of Houston, Texas. Alexis was diagnosed with RA in December 2020 and says that because she is a Black woman, finding doctors that would listen to her was often a struggle.

“Throughout this entire process, I’ve seen about 15 different doctors,” Alexis says. “And that was just me trying to find people that would believe my pain. That was one of the really hard things — people not believing my pain, and not wanting to give me adequate pain management.” Even when they can get treatment, people of color often face doctor prejudice. As a result, this negative bias directly affects care quality. To combat this, doctors need to reexamine their biases and prejudices. And as Dr. Ashira Blazer, points out, we need to reevaluate how people receive care in this country.

“Right now our healthcare system is based on ability to pay, and more often than not people receive health care insurance through their employers,” says Dr. Blazer, a rheumatologist at Hospital for Special Surgery in New York. “This is how societal racism impacts health care. We know that black and brown people, particularly black people who have been discriminated against for hundreds of years, are less likely to hold jobs that allow them to be adequately insured. So black patients are more likely to be underinsured or uninsured. That means that black patients are more likely to seek care, either with primary care physicians rather than specialists or in systems that are under-resourced such as safety-net hospitals or clinics rather than private practices.”

Dr. Blazer further explains that because some Black patients don’t have access to quality care, they are as a result disproportionately relying on medications such as corticosteroids, which have a ton of side effects and don’t prevent progression in tissue injury from RA. And as mentioned, Black patients are also less likely to be prescribed biologic medications and to have heard of biologic medications. But even for Alexis Mobley, who as an immunologist and researcher is someone in the medical field, getting proper care was still an uphill battle. However, it did serve as a way for her to advocate for herself.

“I like to be quiet and see what they [doctors] have to say and see if what they’re saying is aligning with the things I know and the research I’ve done,” says Alexis. “If they aren’t going to be able to do that and impress me scientifically, I don’t want to be there. I try to screen doctors that way. That was part of the process of me having to get rid of people because things like my education aren’t as apparent as my race, sex, or gender expression.”

Shantana Hazel of Bridgeport, Connecticut, and founder of Sister Girl Foundation also had a difficult time finding treatment for her RA. “Treatment was impossible,” Shantana says. “I felt invisible a lot of the time and I definitely wasn’t heard. I used to say that I had to wait for my hands to thaw out before I can actually get up. As odd as it may sound, I made a joke out of it because no one listened. They didn’t pay attention to me. So I really didn’t think it was anything.”

Shantana later went to multiple doctors, trying to get someone to listen because her symptoms kept getting worse. It was at that point that she realized this may be more serious than she originally thought. “It became more debilitating,” Shantana says. As that happened, I started honing in on my symptoms, and what helped or didn’t help. I was creating regimens for myself until I actually found a rheumatology group that listened, tested, and made me feel that it wasn’t all in my head.

But to get to that point wasn’t an easy journey. It required time, effort, frustrating moments, and advocating for herself. In her book, 28 Ways On How To Advocate For Your Healthcare Shantana provides the necessary tools to help boost your confidence in the doctor’s office. For Black women, it can be hard to be seen and heard by doctors, but it is possible. 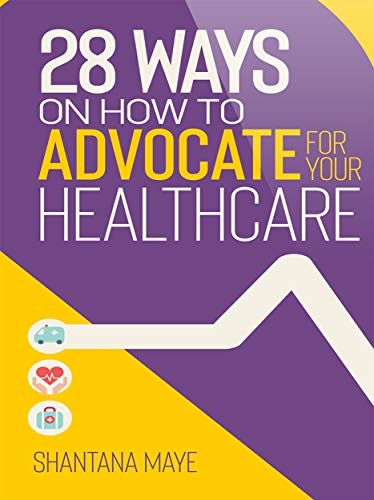 28 Ways On How To Advocate For Your Healthcare $6.99 on Amazon.com Buy now Sign Up

“I always tell myself and others when I’m teaching advocacy there’s never a time when a question or statement that you may make is silly,” Shantana says. “I know that sounds so cliche, but we’re stepping into what could be a space that we’re not familiar with. I do not like using the word ‘strong’ because it has a negative connotation when it comes to black women, that we have to be strong and get through everything. I like to use ‘resilient’. I tell black women to understand the power that we hold in our voices and know that no one knows your body better than you.”

9 hrs ago
by Charyn Pfeuffer

11 hrs ago
by Elizabeth Yuko