Chronic pain caused by arthritis affects millions of people in the United States every year. In fact, about one in four adults with arthritis (15 million people) report experiencing severe joint pain related to arthritis and nearly half of adults with arthritis have persistent pain. If you’re one of those people, you may have tried just about everything to help ease some of the joint pain – from yoga poses and stretches to using the Mediterranean diet, which has been shown to work. “Studies have shown beneficial effects of the Mediterranean diet in reducing pain and increasing physical function in people living with rheumatoid arthritis,” says Amy Shapiro MS, RD, CDN, and founder and director of Real Nutrition. “An example meal would include any type of fish such as salmon, steamed or sauteed vegetables such as broccoli or carrots, whole grain rice, and a side salad with an olive oil dressing.”

However, in addition to foods within a Mediterranean-style diet, there are also a number of proinflammatory foods to avoid (or at the very least, limit) if you want to lessen your joint pain. It may seem overwhelming, especially if these foods are a staple in your diet, but as Dr. Nilanjana Bose MD, MBA says, having that solid foundation can make a world of difference. “When you follow healthy lifestyle measures, including a healthy diet, the body and the immune system are nourished and less inflamed,” Dr. Bose says. “The patient develops fewer comorbidities because RA patients are at higher risk for heart disease, stroke, cancer, etc. So [a healthy diet] helps with inflammation, associated comorbidities and allows them to lead healthy, active lives.”

Foods that contain refined sugar such as sodas, juices, and desserts trigger the release of proteins in the body called cytokines, which cause inflammation. In addition to sugar, watch out for corn syrup, fructose, sucrose, or maltose in ingredient lists, according to Arthritis Health. If you suffer from a sweet tooth or have a sweet treat craving every now and then, try eating fruit, which is naturally sweet, chia seeds, legumes, or dates for a healthy alternative. And as Shapiro notes, fruits, vegetables, beans, and legumes contain high levels of phytochemicals that show anti-inflammatory effects.

White rice, white pasta, bread, and potatoes are all refined carbs and should be avoided if possible to prevent inflammation. And what do these foods have in common (with the exception of white rice)? They contain gluten. Wheat-based flours are one of the most common ingredients used to make bread, pasta, and other carb-rich foods, and gluten is a natural component of wheat. If you already have a sensitivity to gluten, then it should definitely be food to stay away from.

Dr. Bose notes that red meat i.e. beef, pork should be avoided as they are high in saturated fats, which may cause high cholesterol and inflammation. Red meat also contains omega-6 fatty acids, which can also contribute to inflammation. “These are pro-inflammatory foods in the diet,” Dr. Bose says. “And when patients eat these foods, that can further perpetuate the cycle of inflammation.”

Alcohol may increase the frequency and severity of gout attacks, Shapiro notes. Gout is a common form of inflammatory arthritis that is very painful and usually affects one joint at a time. There are times when symptoms get worse, known as flares, and times when there are no symptoms, known as remission. In moderation, alcohol is okay, but if you already suffer from arthritis or a condition like gout, it may do more harm than good, according to the Arthritis Foundation.

When you fry or overcook foods, you’re destroying valuable nutrients. They also contain many known carcinogens, according to the Rheumatology Center of New Jersey. Many foods that come fried also contain a number of heavily processed ingredients and salt. All of these will cause inflammation by triggering the body’s defense mechanisms, which will set off an arthritic flare-up. “Excessive salt intake may lead to swelling and worsening of arthritis symptoms,” says Shapiro. “And highly processed/fast foods may increase inflammation.”

As a general rule, Shapiro notes, people who suffer from joint pain looking to maintain a healthy diet “should avoid (or minimize) saturated/trans fat intake and increase omega 3 consumption.” This means staying away from vegetable oil, which is high in Omega 6 fatty acids and can trigger the body to produce pro-inflammatory chemicals. In addition to vegetable oil, these fatty acids are found in corn, safflower, sunflower, grapeseed, soy, peanut oils, and mayonnaise. 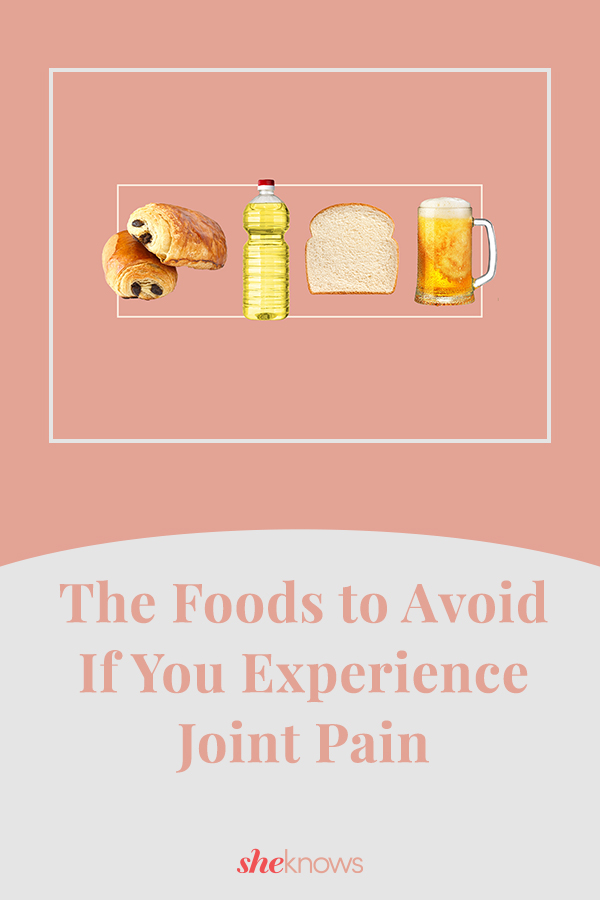 15 hrs ago
by Katie Smith