In the digital age, it’s no secret that we’ve all become a little addicted to our screens, whether it’s our tablet, phone or laptop. And kids are no exception — especially this past year, when so many children relied on screens for schooling and weren’t allowed to spend time with friends or see extended family. In fact, according to a report from parental control app Qustodio, there was a massive 100 percent surge in online activity across every app category in the spring of 2020. But what does this mean for kids in the long-term? How does spending so much time behind a screen impact their psychological well-being? While parents are lucky the pandemic wasn’t as harmful to kids as it was to older adults and those with pre-existing conditions, the secondary effects of the resulting pandemic lockdowns could be just as harmful, and last longer.

For example, according to the same report, 2020 did show that screen time levels started to return to ‘normal’ pre-Covid levels as kids were able to go back to school due to lightened restrictions. But even so, screen time remained up 36 percent on average for the entire year compared to 2019. And the times of day kids used apps continued to be strong throughout the day, instead of just after school until around 8pm or bedtime. And while it may be decades before we know the full extent screen time has on children, research shows that greater use of digital devices and internet use is unsupervised can have a negative impact on kids’ mental health. There are things parents can do to prevent this from happening— but to first explore what steps you can take, it’s important to understand what could potentially be going on behind the screen.

Schoolyard bullying may have been considered the “norm” years ago, but as more and more kids start using technology, and at younger ages, the risk for cyberbullying only increases. According to Pew Research Center, 59 percent of U.S. teens have personally experienced some form of online abuse, with the most common being name calling, and 32 percent of teens say someone has spread false rumors about them on the internet. “In some ways, cyberbullying can be worse or more extreme than in-person bullying, because there’s no break from it when you go home from school. People will do and say hurtful or demeaning things online that they would never say in person,” says Eric Alcera, M.D., medical director for Hackensack Meridian Behavioral Health. “Also, if a cyberbully decides to spread rumors or share embarrassing photos on social media, the words or images can go viral, hitting the radar of many more kids within minutes than would be possible with in-person interactions.”

Higher risk for anxiety and depression

Cyberbullying can increase a child’s risk of anxiety, depression, low self-esteem, or even feelings of worthlessness. Additionally, just spending more time behind the screen can decrease a child’s psychological well-being, according to a recent study published in Preventive Medicine Reports. The same study also detailed the psychological differences between high and low screen time users. High users of screens were significantly more likely to display poor emotion regulation (not staying calm, arguing too much, being difficult to get along with), an inability to finish tasks, lower curiosity, and more difficulty making friends. Caregivers also described high users as more difficult to care for and as lower in self-control.

Among adolescents, high (vs. low) users were also twice as likely to have received diagnoses of depression or anxiety or needed treatment for mental or behavioral health conditions. There can be a number of reasons for this with some experts citing perceived social isolation, sleep deprivation and a loss of self-esteem, especially in teenage girls, when they compare themselves to a carefully curated Instagram feed. “Many girls are bombarded with their friends posting the most perfect pictures of themselves, or they’re following celebrities and influencers who do a lot of Photoshopping and have makeup and hair teams,” says Dr. Alexandra Hamlet in an article for Child Mind Institute. “If that’s their model for what is normal, it can be very hard on their self-confidence.”

The more time you spend looking at a screen usually equates to less time being spent outside or participating in physical activity. This can lead to health-related issues such as obesity and diabetes, which in turn can impact a child’s self-confidence. “If you’re spending a lot of time on your phone, you have less time for activities that can build confidence, a sense of achievement and connectedness,” says Dr. Hamlet. “Yes, you get a little dopamine burst whenever you get a notification, or a like on a picture, or a follow request. But those things are addicting without being satisfying.” And the more time a child spends behind a screen, the worse health-related issues could get as there are other factors as play. According to a study published in medical journal Pediatrics, evidence suggests that screen exposure leads to obesity in children and adolescents through increased eating, while viewing and exposure to high-calorie, low-nutrient food and beverage marketing influences children’s preferences, purchase requests and consumption habits. Additionally, your child’s eyesight could be impacted from heavy screen time, with kids sometimes exhibiting symptoms such as eye fatigue, which can cause the inability to concentrate, as well as headaches, blurry vision and dry eyes. 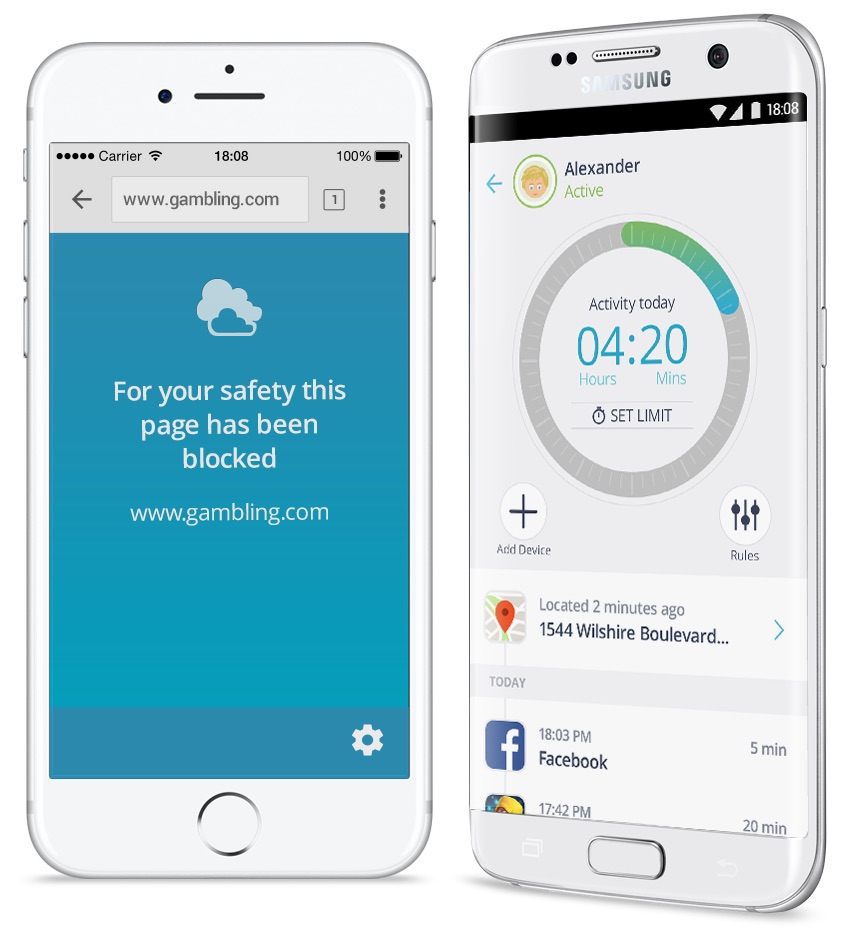 There are a number of things parents can do to ensure their child isn’t spending too much time behind a screen and to limit their exposure to cyberbullies or inappropriate apps. For starters, parents can monitor their kids’ online habits and even manage their online activity. It’s easy to do this with apps such as Qustodio, which also allows you to block inappropriate content and set time limits for games, apps and screen time.

This particular app only takes minutes to set up and includes an array of premium features. From a family locator feature, which allows you to easily find your child on the map and know where they have been to tracking your child’s calls, texts and setting a list of blocked contacts, there’s nothing this app can’t do. It even allows you to add an SOS button to your child’s Android smartphone that will send you location-based alerts if they are ever in trouble. For parents interested, Qustodio is offering 15 percent off on all premium pricing plans valid until July 16th. All you have to do is use the code SHEKNOWS15.

Parents can also encourage their child to spend time outdoors. With summer finally in full swing, it’s the perfect opportunity for kids to hang out by the pool, go on hikes or go camping, especially after a long year of being cooped up away from friends and family. “To protect children’s physical and mental health, make sure kids get physical activity at least 60 minutes a day,” says Dr. Cecily Havert.

And last but not least, parents can also try to model healthy screen use for their kids. Children are often watching their parents or older family members to see what they do, and if they see you spending hours on your screen, chances are they will follow that behavior. And one way to limit your screen use is to simply spend that time interacting with your kids. “The number one recommendation that we give to parents is [to] spend time engaged with their kids,” says Jon Lasser, PhD in an article for the American Psychological Association. “It’s simple, it’s good parenting and it promotes a healthy relationship.”

This article was created by SheKnows for Qustodio.