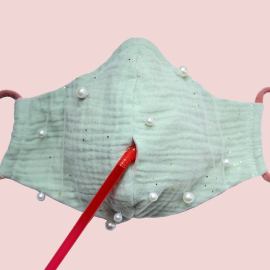 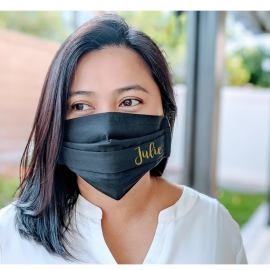 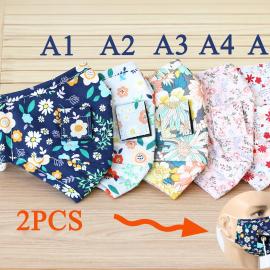 Last week, my husband and I discussed how masking amid the pandemic has changed our perspectives on public health and safety for good. “I’ll probably wear a mask every flu season,” I said, noting that mask-wearing is customary in other parts of the world as is. (See: The episode of Sailor Moon when Sailor Mars arrives to fight in a mask because she has a cold.) He concurred, adding that we hadn’t had a cold or the flu in over a year.

A few days later, on April 27, the Center of Disease Control (CDC) updated its guidance regarding masking outdoors, indicating that fully vaccinated and inoculated people can walk, run and socialize in small groups without masks while outside. Almost immediately, states announced they would ease outdoor mask mandates to comply with said guidance, including New York, where I reside. Yet despite being fully inoculated — and a big fan of science and the CDC — I struggle getting myself to go maskless outside yet. It simply feels too strange, even if I know the science is sound.

Others, like Kathy Benjamin, an author in Austin, Texas, also fall somewhere in between: They too believe the science, but are skeptical and/or more cautious in specific situations. “I trust the science and scientists to keep the country updated as the evidence evolves and they come to new conclusions. If they say it is safe in some circumstances, I believe them,” she says. “But, for example, if I go to a baseball game, even if it’s over 100 degrees, I am wearing a mask.” She also plans to continue wearing one when with her immunocompromised mother, who prefers to mask for the long-term.

But some Americans, like Lindsay Merbaum, an author in Michigan, think the CDC’s decision is ill-considered, and we should continue advocating for masks as a public health measure until more people are fully vaccinated.

“I’m infuriated. The Trump administration did nothing to hammer home the importance of wearing masks, nor did they model proper conduct. As a result, our population is confused, defiant, and uninformed,” she says. “Continually updating behavior recommendations instead of drilling in the message to wear a mask only creates more confusion. Even if the CDC is correct that it’s safe to be outside mask-less if you’re vaccinated, they probably should’ve waited before announcing that message.” She also adds that now, individuals have been left to decipher what constitutes a large group on their own. “There’s a lot of gray area between a barbecue and a concert.”

“Let’s not forget 5 million Americans were a no-show for their second shot,” she continues. “The pandemic is far from over.”

Kristy Hanson, a singer-songwriter in Los Angeles, is concerned as well. “We are nowhere close to herd immunity and earlier we’d been told that we have to continue with mitigation strategies until more people are vaccinated,” she says. “To say ‘fully inoculated people can go unmasked’ will unintentionally give permission to people who are not inoculated and thus more likely to spread Covid to go unmasked as well, because there’s no way to enforce that difference out in the world.”

Hanson also has a daughter, who, by definition, must remain masked because children under 16 are ineligible for vaccination. “If children are wearing masks, I think parents will need to continue, too. I can’t imagine being in a public outdoor setting with my daughter and saying, ‘Sweetie, I can take my mask off now but you have to keep yours on.’ It’s unfair, and parents have to set an example for their kids.”

Others, however, are thrilled with the shift in guidelines — outdoor runners in particular.

“I’m excited. I’ve been following the research coming out that pointed in this direction, so I was wondering when formal guidance would start to shift,” Christine Corbin, a creative consultant in New York, explains. “I’m most excited for my runs…I started running really late at night because there was almost no one out on the running loop so I could go mask-less….I find the sensation of running while masked to be a little scary because it feels so claustrophobic.”

Emily Parker, an analyst in Brooklyn, is also looking forward to running sans mask, but acknowledges the shift may have come a bit early. “I think it may be slightly premature given the vaccination rates, but I do think going into summer it is the right decision,” she says. “The lack of evidence for a real risk of spread when outdoors is so well documented and, I think, intuitively understandable. After the protests and park density last summer, I believe the science.”

Meanwhile, some Americans have been converted to mask-wearing for good, regardless of whether or not there’s a pandemic. “I’m going to keep wearing a mask, even after the world is ‘normal’ again,” says Carolina Gazal of Queens. “Now that I know how easily bacteria spreads, I don’t think I can go back to an unmasked life.”

How safe is it to go maskless right now?

Considering all the emphasis on “the science,” we queried actual science and infectious disease experts for clarity regarding the CDC’s guideline shift, and asked: Is it really safe to go mask-free outside?

“Surveillance data has shown that only about 10 percent of people infected with COVID were infected in outdoor settings,” Dr. Brian Labus, Ph.D., MPH, infectious disease epidemiologist and professor of public health at University of Nevada at Las Vegas, tells SheKnows. “As we move back toward our new normal, this is a simple, early step in moving away from the behaviors we have been taking to control COVID.”

That said, he clarifies that no set of behavioral changes are truly “safe” at this time.

“We think about transmission in terms of ‘more safe’ and ‘less safe.’ There is still a risk of transmission outdoors, and that risk is much higher if people are unvaccinated,” he adds, reiterating that the most recent update in guidance is only applicable to fully vaccinated, and inoculated, individuals. “It should not be seen as making any other changes. State and local rules still must be followed no matter what guidance is put out by the CDC.”

Dr. Javeed Siddiqui, M.D., MPH, an infectious diseases specialist based in California, concurs, and fears the shift in guidelines may be misinterpreted. “The CDC statement is specific and I am concerned people may be reading too much into it,” he says. “[The CDC] stated if you are fully vaccinated. That means two to four weeks after the second of a two dose vaccine or 2 to 4 weeks after the Johnson and Johnson vaccine.”

“For me, getting vaccinated and wearing a mask is my personal health issue, it is not a political issue.”

Siddiqui will also personally keep wearing masks outside: “As an infectious diseases physician and someone who is fully vaccinated, I will continue to wear a mask when outside and walking around other individuals,” he says. “For me, getting vaccinated and wearing a mask is my personal health issue, it is not a political issue.”

Dr. Kunjana Mavunda, M.D., a Florida pulmonologist and former medical director of epidemiology and disease control at the Miami-Dade Department of Health, agrees that while “there is adequate science documenting that outdoor airborne transmission of viruses is low,” people should continue to mask when in close proximity to others.

“If people will be closer than arm’s-length for more than 10 minutes, masks should be worn – whether vaccinated or not,” she advises, adding that “the only way a person who is not vaccinated can go maskless outdoors is if they have no-one around them and it is breezy.”

“It all comes down to the time you spend in close contact with people,” Dr. Labus concludes. “The risk of spreading disease as you walk past someone is very low, but the risk is higher if you are sitting next to someone on a park bench. The best way to protect yourself and others is to get vaccinated.”

“If we could get everyone vaccinated, none of this guidance would be necessary.”

This kids face mask gallery is a good place to start shopping!

20 hrs ago
by Lindsey Lanquist