SheKnows is proud to partner with BAND-AID® Brand to celebrate 100 Years of Care. Through this partnership, we are lifting up the stories of the most important caregivers in our lives and thanking them for their invaluable service — providing care on the front lines both inside and outside of the home. To mark the occasion of its 100th anniversary, BAND-AID® Brand is making a $100,000 donation to global humanitarian leader CARE to support frontline heroes and deliver other lifesaving aid around the world. Visit CarePackage.org/band-aidbrand to send a CARE Package® of support to those who need it most.

Fittingly enough, it all started with a book. Growing up states apart and not destined to meet one another until they attended the same HBCU in Huntsville, Alabama for their undergraduate degrees, Devon Scott and Samantha Harris were both inspired to pursue a career in medicine after reading the same book as kids — Gifted Hands by famed Black neurosurgeon Ben Carson. “Just looking at someone that looks like us in the field of medicine, he was kind of like a role model for us and someone that sparked our interest in the field of medicine,” Harris told SheKnows. “It just grew from there.”

Now, both Scott and Harris are fourth-year medical students at Loma Linda University in Southern California. In the early months of the pandemic, they, like much of the rest of the country, found themselves with extra time on their hands and decided to write a children’s book. In April, they published Why We Stay Home, which is available for free as a downloadable e-book.

The book has since blossomed into a children’s series centered around sisters Millie and Suzie — including a second titled What Happens When You Break a Bone? (which is also available as a hardcopy) and a third titled Why Your Skin Is Beautiful. In creating this children’s series, “we kind of really want to educate [kids] about the different fields in medicine, all while highlighting, you know, African-American physicians,” Harris said.

To date, the Millie and Suzie books have been downloaded more than 50,000 times in at least 27 countries around the world. With these books, Scott and Harris are poised to do for a new generation of children what Carson’s book did for them: inspire more young people, and particularly young people of color, to go into medical fields. “I feel like we had that role model going up through the book Gifted Hands,” Harris said, “and now we’re getting to turn around and be that role model for others, which is which is definitely awesome.”

Why did you choose to go into medicine?

Devon Scott: “I pretty much knew I wanted to go to medicine ever since high school. I was a track and field athlete and also a soccer player and I really loved the intersection of sports and medicine. And I was influenced by a lot of the team doctors that we had and pediatricians in my life, and I wanted to explore that more. I went to college with that same aspiration, made it to medical school, and I’m going into orthopedic surgery to further that intersection between sports and medicine.”

Samantha Harris: “Initially, I wanted to be an OB-GYN, because where I grew up, there are high rates of teen pregnancy and an STDs. And so when I went to college, I did research in women’s health all towards the goal of becoming an OB-GYN. But then when it came to medical school and I finally had my first rotation in OB-GYN, I realized that the reason I loved it so much was because of the babies. So when I’d be in a C-section and the mom gave birth, you know, they kind of passed the baby off to the pediatric team and then focus on the mom. And I found myself wanting to go with the baby instead of staying to finish the rest of the surgery. So that’s when I knew I wanted to change gears towards pediatrics.”

As a kid, what led you to think about becoming a doctor?

Now that you’re in medical school, do you see a lot of people like yourselves — Black men and women?

“I feel like that’s been an aspect of the book that’s been such a joy to kind of read parents responses like, ‘you know, my daughter read your book and she’s four and her name is Samantha, too, and she wants to be a pediatric trauma surgeon’ or something like that. I feel like we had that role model going up through the book Gifted Hands, and now we’re getting to turn around and be that role model for others, which is which is definitely awesome.”

DS: “Being minorities in the field of medicine in general has come some way. I mean, it’s still not where we want it to be — where it’s proportional representation in terms of population [for] minorities — but it has come some way. We’re both part of the Student National Medical Association, which is an association for medical students that are minorities. And we’re both heavily involved in that. So we do what we can to give back to the community, to reach out to undergrads and high schoolers who could have an interest in medicine so we can do our part to increase that representation in medicine.

“We also go to a local area, high schools, and just like help kids with homework, teach kids about different body systems, just showing kids that there are local people around that are there to support them and show them that it’s possible to become adults that they see themselves.”

Coronavirus has impacted everyone’s daily lives. How has it impacted your futures and where you are in medical school right now?

SH: “When this started, I was still in my third year of medical school, and that’s when you’re rotating through the different specialties so you can figure out what you want to go into. Around March, we were actually removed from rotations for about two months just because everything was so new. They wanted to decrease exposure, decrease the spread. Thankfully, around the end of April/beginning of May, we were able to go back and finish out the school year.”

DS: “I actually was on my research year — you can take a break between your third and fourth year to do research. So I was on the other side of the country in Pittsburgh for a year. I was working in a biomedical science lab and we couldn’t go into some labs because of restrictions. So I was at home during the same time period where Sam was at home. So in that time, we created Suzie.” 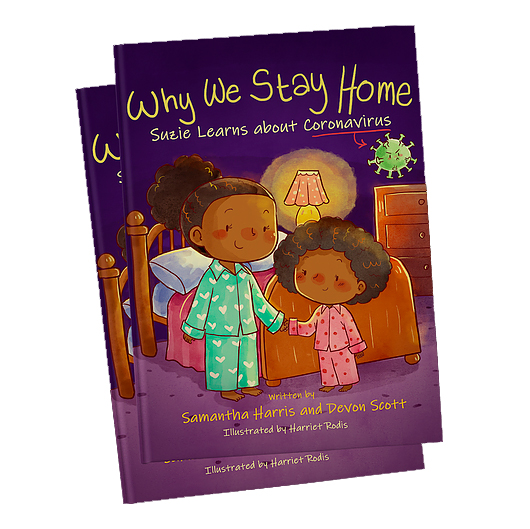 Oh wow, so you guys were doing this virtually — like the rest of us! Tell me a bit more about how Millie and Suzie came to life.

SH: “We were FaceTime-ing one night and Devon approached me with the idea that as medical students, we didn’t really know what was going on — so little kids probably felt the same way. There were very few kids books out there and we saw that while they were great resources, they kind of catered towards older children. So that’s when we decided that we were gonna write a book to kind of explain this topic of coronavirus and social distancing, why you have to wear a mask when you go with mommy and daddy grocery shopping. Devon really suggested the idea of the explanation being between an older sibling and a younger sibling and introducing the conversation in anon-threatening way. And then I just kind of took that and ran with it.”

DS: “We don’t go into detail about every little aspect of coronavirus. But the reason that we did that was because he wanted the book to be a conversation-starter so that when parents read it to their little ones, they can pause and talk about other things and, you know, kind of probe to see how their kids are feeling as well.” 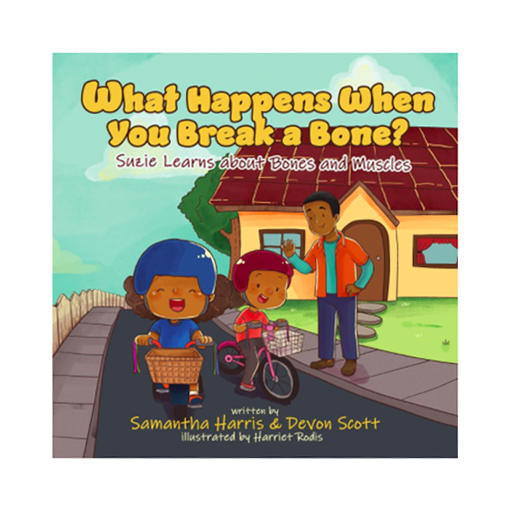 And since this first book, you’ve created a few more. How did you decide to make this a series?

SH: “We kind of really want to educate [kids] about the different fields in medicine, all while highlighting, you know, African-American physicians. So I just had this idea that we’re just going to jump from field to field and just explain, you know, what an orthopedic surgeon does and the correlation between the body’s system. Orthopedic surgeons work with the musculoskeletal system, but you can’t really say musculoskeletal to a 4-year-old because that’s over their head. So, you know, just breaking down. What is a bone? Why are you encouraged to drink milk?“

DS: “Our third book is called Why Your Skin is Beautiful. So we came up with this idea because we’re very passionate about the African-American community and minorities at large. And in the wake of the civil unrest that was going on, we felt like we had this voice, we had this community that we started to provide for with these resources. But we didn’t want to just put something out there for the sake of it. We wanted to be very true to what our mission was: to educate kids about the body and doctors that take care of the body. So we said, how could we merge the two? And, you know, we’re talking about race, we’re talking about skin. Why not write a book focusing on what dermatology is and introduce kids to what a dermatologist does? Let’s talk about how all races, regardless of skin color, are beautiful and important. And anyone can relate to that because it has the core message of equality and justice.”

Why Your Skin Is Beautiful, Free E-book $0
Buy now

Your books do this so well. How can parents, do you think, find that balance between encouraging their kids to be careful without making them scared or anxious with subjects like coronavirus?

This interview has been edited for length and clarity.

This article was created by SheKnows for BAND-AID® Brand. BAND-AID® is a registered trademark of Johnson & Johnson.