Chyler Leigh wasn’t diagnosed with bipolar disorder until her late 20’s — after she’d had three children, and in the midst of her seven-year run on Grey’s Anatomy. By that point, Leigh tells SheKnows, things were at a “critical” point. The actress was self-medicating, alienating herself from her loved ones and still trying desperately to pretend nothing was wrong. So, what drove her to finally seek help? The same thing that got her through the rough days and months that followed: her family.

Leigh first went public with her bipolar disorder diagnosis on Tuesday, launching her work with Be Vocal: Speak Up for Mental Health, an initiative encouraging open conversation and awareness around mental health. “I was very nervous to share my story,” Leigh told SheKnows, “very worried that once you see it, you can’t not see it…once it’s out there, you can’t take it back.”

Due to the stigma surrounding mental health in general — and bipolar disorder, specifically — it’s a sad reality that Leigh’s fear makes perfect sense. This fear hasn’t only made Leigh nervous about speaking up: It’s a major reason why it took her so long to be diagnosed and given the help she needed.

“I knew that something was wrong early on,” Leigh said. “But I think there was a big part of me that never really wanted to know exactly what it was…I felt like, if I expressed it, if I put it out there, I couldn’t take it back. And I didn’t want it to rock anybody else’s boat, so I just drowned on my own, in a sense.”

For much of my life, I’ve been living with a mental health condition, and I’m ready to speak up about it. I’m partnering with #BeVocalSpeakUp to share my story. Watch this video and visit https://t.co/F2jLeNdxMo to learn more. #sponsored pic.twitter.com/5Sdq6TmJ9D

Leigh said she almost got help many times throughout her 20’s, seeing a number of therapists when she got pregnant with her first daughter. “I come from a family history of bipolar disorder and depression and anxiety, so I had a very traumatizing view of what it looked like when I was young,” she told us. “When I found out I was pregnant with a girl, it terrified me, because I was so afraid of becoming my mother or being in that same state of mind.”

But going to therapy wasn’t enough. Her heart wasn’t in it, and she was still afraid to take a hard look at how badly she’d been struggling over the years. She lied to her therapists — so well, she said, that they more or less told her she didn’t need further help. “I was really able to pull the wool over people’s eyes,” Leigh admitted. “I wanted to say I was really getting help — but at the same time, I didn’t want anybody to know that I needed it.”

Leigh wasn’t just lying to other people about her condition, but lying to herself. She made excuses for how she was feeling (“oh, it’s hormones, I’ve had three kids,” she remembers thinking) and, eventually, tried to stop feeling at all.

“I hit a point where I would try to escape as much as I possibly could,” she said. “Walking into doctors’ offices, I could convince them to give me a medication that I knew was maybe a stronger medication, and I started to make a cocktail myself…I was self-medicating because I didn’t want to feel anything anymore.”

Want to know more about Be Vocal: Speak Up for Mental Health? Let us tell you! Be Vocal is a collaboration between six leading mental health advocacy organizations @afspnational, @dbsalliance, @jedfoundation, @mentalhealthamerica, @namicommunicate and @nationalcouncil and Sunovion Pharmaceuticals. Together we are working to empower people to speak up for themselves and their communities to advance mental health in America. Head over to our partners’ pages to learn more about the great work they are doing to support people living with and impacted by #mentalhealth. #BeVocalSpeakUp #MentalHealthMatters #PartnerSpotlight

Finally, Leigh couldn’t do it anymore: “I hurt that people that I love, and I was so disconnected and completely unavailable for my family…I hit a point where it was so detrimental to my marriage, so detrimental to the well-being of my family, that it was like, ‘ok, this is do-or-die.’ Literally. I was at a suicidal point…It hit a point where it was like, you have to make a choice. You either live or you die. And I chose to live.”

Leigh checked into the hospital (under an alias, still afraid of being recognized and having her struggles made public), where she spent the next week. Over the following weeks and months, she turned to her family for support — and recalls the unbelievable encouragement they gave her, after how badly she felt she had hurt them.

“[My mother-in-law] encouraged me a tremendous amount, even when I was the dealer of the wreckage in the house,” she said. “She looked at me and she was like, ‘Look, you’re my daughter, just the same. And we’re going to get through this.” 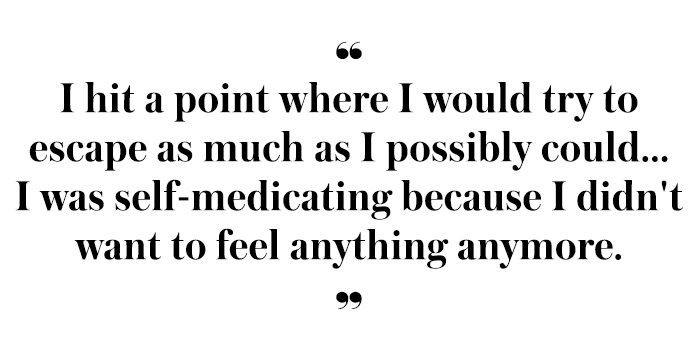 Leigh’s daughter, Anniston, provided much-needed words of comfort too: “My 10-year-old was one that really encouraged me when I went to do the filming for the [Be Vocal] video,” the actress shared. “She’s like, ‘Mommy, you need to know everybody in this house loves you and we support you and everything’s gonna be okay.”

But how much, exactly, do her children know about her diagnosis? It depends, Leigh says. She has 10-year-old Anniston, 13-year-old Taelyn, and 16-year-old Noah, and her conversations with each look slightly different.

“I’m a little less specific with [my girls], only because they themselves have their own things that they’re dealing with,” she explained. “My 13-year-old in particular: She’s on the spectrum, she’s high-functioning, but she has severe anxiety…My son, being older, being 16, he and I have a lot of very honest, oftentimes very difficult conversations because there’s a lot in him, that I see that he struggles with, that’s very similar [to me].”

@eastofeli You have my whole ❤️

While Leigh’s kids are all on slightly different pages when it comes to the details, her diagnosis and her lifelong struggles with her mental health have informed the way she parents and the values she instills in her family. “My kids, all three of them, are incredibly empathetic kids,” she told us. “They are understanding that it’s okay to not be okay — that’s a big conversation in my house. And it’s okay to celebrate when you are, sort of like ‘seize the moment.’ Not seize the day, because we have to go by moment. And that’s okay! That’s all right: Every moment, every day is a victory. I’ll take it.”

For Leigh, and for her family, that moment-by-moment approach is key to where she is with her diagnosis today. “It felt like the diagnosis was my definition,” she said of the weeks that followed. “I’m getting to a point where I do know what I’m dealing with and I’m not the only person who is dealing with it.”

What Leigh wants people to understand about bipolar disorder is that “it does look different in everybody” — but also, “that you’re not alone, and seeking help is incredibly important.” Speaking out, too, is proving to be a huge step for Leigh in her mental health journey.

“As the day is progressing, I’m feeling lighter,” she told SheKnows of the day she first told her story to the media. “I’m now given an opportunity, through having a powerful story, to be able to utilize it…and hopefully, make a big impact on people’s lives.”

8 hrs ago
by Cheryl S. Grant

13 hrs ago
by Lindsey Lanquist