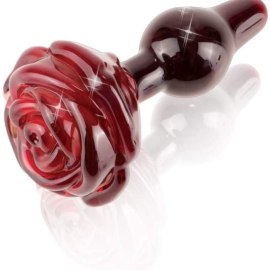 November 8 will mark the 29th anniversary of my mother’s death. I was 17 years old and a senior in high school when she lost her brief battle with lung cancer. While everyone else was getting helicopter-parented into higher education, I was left to free-fall into the world with minimal parental support. When my mother died, I completely shut down and convinced myself that if I cared for anyone, they could leave at any moment. This crippling fear of abandonment would be tested repeatedly, as my life became riddled with an absurd amount of loss. I lost close friends, lovers and then my father, two decades later, on Father’s Day.

Related story Miscarriage Is a Thief: How Pregnancy Loss Stole My Baby and My Peace of Mind

I grew up in a household where sexuality was not celebrated. Sure, very few of us were ever taught about sex in a pleasurable way and instead were only given that information in a “how not to get knocked up” kind of way. Still, at a young age, I got in trouble for masturbating, and when I lost my virginity, my parents called me a slut. At no point was there a positive association made with my body — from what I looked like, weighed, or may have wanted sexually. If anything, my upbringing focused on how to fit into a strict, societally acceptable box. And that did not involve any semblance of sexual agency.

It became more and more apparent that the relationship I had with myself would set the tone for every other relationship I’d have — platonic or romantic. I didn’t particularly love my life at the time. I was navigating depression and a whole lot of heartache. But I did learn that, while life can be super messy and complicated, you can still live, love and achieve.

Once I started to make peace with my personal mayhem, I opened myself up to all permutations of love and started dating non-monogamously (because if you’re terrified of loss, opening oneself up to the possibility of multiple heartbreaks at any given moment seems like a great idea, right?). The standard-issue relationship models in life never felt right for me, so I’ve had to come up with my own.

It was the first woman presidential candidate, Victoria Woodhull, who declared in 1871: “Yes, I am a Free Lover. I have an inalienable, constitutional and natural right to love whom I may, to love as long or as short a period as I can, to change that love every day if I please, and with that right neither you nor any law you can frame have any right to interfere.” I believe it’s an unfair expectation for one person to provide 100 percent of another’s emotional and physical needs, even though monogamy is the default relationship model. Rarely are alternatives considered, nor the idea that one can choose to design their own relationship — roughly 5 percent of Americans, including myself, live a non-monogamous lifestyle. 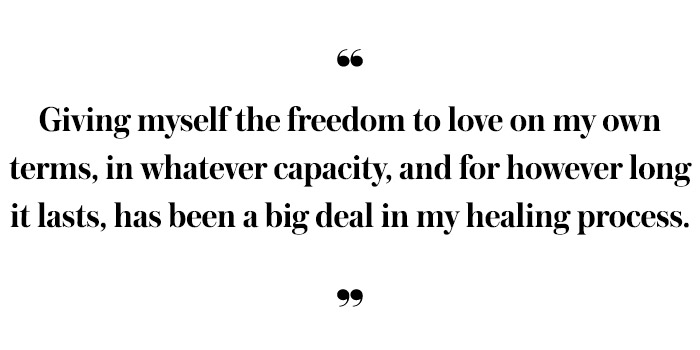 Giving myself the freedom to love on my own terms, in whatever capacity, and for however long it lasts, has been a big deal in my healing process. As I’ve learned, it doesn’t matter how much you love someone, they can be gone in the blink of an eye. Life is unforgiving like that. You may also decide to walk away from a relationship for whatever reason. That’s okay. Best case scenario? Show up, be vulnerable and love without abandon. The relationship may crash and burn, but revel in whatever love and pleasure can be had for as long as you can.

Another thing I’ve learned is to prioritize my pleasure — whether it’s solo or partnered — and advocate for my orgasm. I’ve unraveled a childhood of slut-shaming and embraced having sex for the sake of sex. Casual sex doesn’t mean treating people casually, nor does it have to be wrapped up in commitment. Sex feels good, and as long as it’s between consenting adults, who cares if it’s a one-night stand or a steady dynamic? We can choose what our sexuality looks like and how we want to show up in the world.

If I’ve learned anything in my near-three decades of navigating grief and loss, it’s that’s sometimes you must take a chance, love more than you ever thought possible, and allow yourself to be vulnerable. Healing can be messy, and it’s not a linear process. Things can — and will — go off the rails, but if you can connect with yourself and find power in your pleasure, things may go a little more smoothly. Loss and grief are part of life, whether we like it or not. It’s how we deal with it that makes it more or less manageable. How I love myself and others has made it easier to learn from and let go of the growing pains.