For as long as I’ve had my period, I’ve always had the worst cramps. I got my period fairly early on, when I was 12 years old. On a pain scale from one to 10, it would be a nine or 10 every time. I remember lying on the couch in the fetal position, being in so much pain.

After the first day it would taper off and I’d have the rest of my period without an issue. Over-the-counter ibuprofen was the only thing that helped. I tried everything to alleviate the cramps, but the only thing that ever worked was reflexology. I started doing it as  a young teenager, but I ended up doing only six sessions because it was expensive. It got me thinking about how the body is connected and there are solutions other than ibuprofen.

Cramps that broke the pain scale

Because the cramps were so bad, I was told to go on birth control pills in high school. It’s hard to remember to set your clock and take the pill at the same time every day, and being an athlete (I was on the water polo team), my schedule was crazy. When I was in college, I switched to the vaginal ring. Being on birth control didn’t make a dramatic difference when it came to my cramps. Anyone that knew me, knew the first day of my period was horrendous. I needed the maximum amount of recommended ibuprofen that day. I downloaded a period tracking app because it was so irregular — I could never guess when it was coming. I tried reflexology on my own and would also use a heating pad and lie on my right side, but nothing worked. When I went to the doctor, they would recommend the same pain reliever I was already taking — they never had any other suggestions.

When I got pregnant, the best part was not getting a period and not having to worry about these terrible cramps. After having these cramps for so many years, when I was in labor, I felt the contractions weren’t so bad. I have a pretty high tolerance for pain.

My kids are very close in age. You’re told that it’s hard to get pregnant when you’re nursing a baby, but my first daughter was around eight months old when I got pregnant with my second. I never got my period back because when you’re nursing you don’t always get a period, and then I nursed my second daughter, so I went for three to four years of not having a period at all. It took a while to return, but it was worse than before. It was so heavy, the flow had increased, and the pain went from a 10 to a 12. I couldn’t believe that it could get any worse, but it was really bad. I need to figure out something to do.

I’ve always been in shape and an athlete, so weight maintenance hasn’t been a struggle. But having two kids back-to-back — I gained 20 to 30 pounds with my first daughter and an additional 20 pounds with my second. So at age 33 I was 40 pounds heavier than I had been my whole life. I wanted to lose weight, so I was trying to watch calories and did something similar to a Weight Watchers program, but none of that was working. I talked to my healthiest, most fit friends, and they kept mentioning intermittent fasting. I know a lot of nutritionists and doctors and they will tell you it’s more about watching what you eat — you can’t out-workout a bad diet. If you’re not focusing on what you’re eating, you won’t see results. 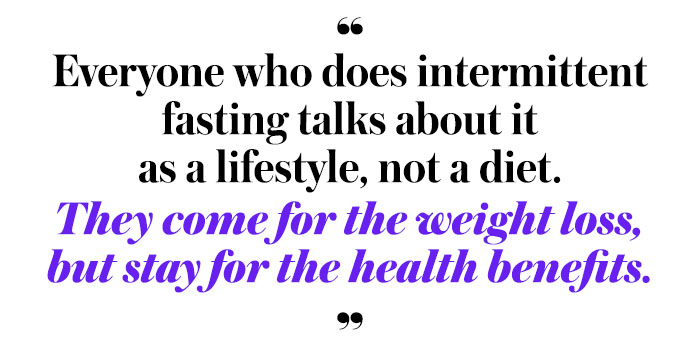 There are a variety of ways to do intermittent fasting, but I do the most basic, which has 18 hours of fasting. At noon you open your eating window until 6 p.m., and it’s called “18 to 6.” “Intermittent fasting works by shortening your feeding window,” explains Cynthia Thurlow, NP; Functional Nutritionist, two-time TEDx Speaker, and co-host of Everyday Wellness. “Instead of snacking all day long, you consume meals in six or eight hour blocks of time and the rest of the day you are in digestive reset. While fasted, your body will tap into fat stores for energy; your insulin levels will be lower, so it will boost mental clarity; it reduces inflammation and lowers your risk of developing diabetes and even Alzheimer’s disease; you will get spikes in human growth hormone, which helps build calorie-burning muscle; it evokes autophagy (spring cleaning for the cells); protects against neurodegenerative diseases like Parkinson’s; and improves bio-markers like blood pressure, glucose levels and cholesterol panels. The great thing about intermittent fasting is that you are not focused on calorie counting, but rather on our feeding or fasting window time frame and then creating strategies to ensure this works with your lifestyle.”

Many people who do intermittent fasting talk about it as a lifestyle, not a diet. They come for the weight loss, but stay for the potential health benefits. When making a lifestyle change, it has to be something you can do for the rest of your life. As I was fasting longer, my body started craving healthier foods. Because you eat less frequently, you listen more to your body’s hunger signals. When I knew I had to get all my nutrients in one or two meals, I was naturally desiring healthy foods.

I learned ibuprofen helps to decrease inflammation in the body. Fasting can also help reduce inflammation, so I wondered if it might help with period cramps as well.  I decided to try fasting longer on the first day of my period to see if that would help my cramps. Honestly, it was nothing short of a miracle. I remember very vividly: The first day of my period was a Saturday. I woke up and the cramps were really bad. I told my husband and he ran to get my pain reliever, but I didn’t take it. At first all I could think about was the horrible cramps, but at 1 or 2 p.m. I realized my cramps were now a two on the pain scale. They were still there, lightly, but I definitely didn’t need the ibuprofen. I ate my meals like normal that day.

The second month, when I got my period, the cramps came in at pain level two or three. It was very manageable; I never thought to take ibuprofen. This week I just finished my period for the third time since I started intermittent fasting and the cramps were 100 percent gone. I can’t believe it. I can finally breathe a sigh of deep relief. I feel healthier because I’m not as reliant on a pain reliever; this is more holistic. I’m more in tune with my body and thinking about how I’m feeling. And my period is also back to being shorter. 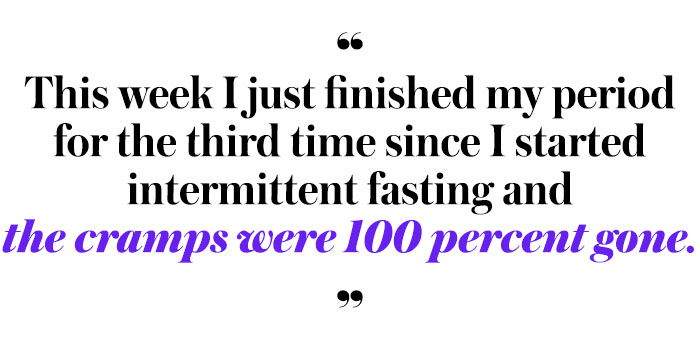 “Intermittent fasting can help your period by balancing sex hormones as well as other hormones,” Thurlow tells SheKnows. “Adipose or fat tissue is very estrogen-rich. When you lose fat with intermittent fasting, you will help contribute to more synergy between estrogen and progesterone. Estrogen predominates in the beginning of your menstrual cycle and progesterone dominates during the secretory phase of the menstrual cycle. Please note, it is absolutely critical that you don’t skimp on calories during your feeding window because you can throw off your menstrual cycle if you are not eating enough calories. If you are overweight, combining a low carb diet and intermittent fasting can help reduce circulating levels of the hormone insulin, which can have profound physiological benefits, including ovulation and fertility.” And while it can potentially decrease cramps and improve PMS, Thurlow cautions that it may take two to three cycles to see these benefits.

It’s only been four months and in that time I’ve lost 20 pounds, and this is weight I could not lose for a whole year before that. Since I’ve lost it in a healthy way, I’ve maintained that weight loss quite easily. I’ve seen all these other improvements in my health. Now when I get my period, the longer I wait in the day to start eating, the better I end up feeling. It really did work. When I first started intermittent fasting, I remember my period had come earlier than it was due, but it takes a couple of months for your body to understand how you’re fasting and what’s going on. Now my cycles have started to get regular. Altogether, it’s amazing.

Nicole C. is a mom to four and two-and-a-half-year old daughters in New York City. This is her story as told to Celia Shatzman. This is based on Nicole’s personal experience and should not replace actual medical treatment.