Pregnancy means dealing with a whole bunch of changes happening in your body all at once. Some of them — like morning sickness, swollen ankles and back pain — are pretty well-known. But others, like having weird dreams, may come as a surprise to people when they get pregnant for the first time. Here’s why this happens and some of the most common pregnancy dreams that you might encounter when growing another human inside of you.

Related story Is This One Example When Mansplaining to a Pregnant Woman Is OK?

Of course, every pregnant person is different and there’s no template for prenatal dreams, but many tend to fall into three categories: anxiety dreams, sex dreams and everything else.

Understandably, many pregnancy dreams center on being anxious about your upcoming arrival. According to Dr. Nancy Irwin, a psychologist at Seasons in Malibu, some of the most common pregnancy dreams are dreaming about having triplets instead of a single, that the baby has two heads; that the baby is another race or an alien from another planet and that the baby will reject the mother. Others include dreaming that you’ve forgotten to feed or care for the baby, suddenly falling, being attacked, being trapped in a small space where you can’t escape, having your partner no longer find you attractive and thinking that you’ve made a big mistake while pregnant or caring for your baby, What to Expect says.

Having sex dreams during pregnancy is surprisingly common. And yes, they could be about your partner, but they could also be about someone who’s not your partner. Or, if you’re typically attracted to men, it’s entirely possible to have sex dreams about women, Parents reports.

There are plenty of other types of dreams that don’t fall into the other categories. According to What to Expect, these could include having dreams about a deceased friend or family, going through labor, and what life is going to be like after the baby is born.

What do these dreams mean?

Dreams can feel unsettling any time, especially when you’re pregnant, but having frequent, vivid dreams is totally normal. “Dreams reflect what the dreamer is focusing on or worrying about at the time of the dream,” Irwin tells SheKnows. And obviously, when you’re pregnant, you’re very focused on — and probably worried about — giving birth and being a parent.

Having said that, Irwin says that there are no general interpretations of dream symbols. “One must ask oneself what they are trying to release or resolve,” she explains. “Pregnant women many times are feeling inadequate about their parenting skills, or not ready for this role, or they feel overwhelmed — [if] multiple birth dreams [are involved] — or worried they will be like their own mothers (if she was ineffective).” Dreams typically are detoxifying the brain and the mind, and letting go of disturbing feelings, Irwin adds — they are probably not predicting the future.

Why do pregnant people have these dreams?

There is no single, clear source of pregnancy dreams, but there are a few potential causes. The American Pregnancy Association explains that your body is going through so many physical, emotional and mental changes during pregnancy that it’s not surprising that your sleep is affected.

“When you are unable to keep a regular sleep schedule, or when you wake up more in the night either from discomfort or the urge to urinate more frequently, this will impact your REM (Rapid Eye Movement) sleep,” the APA notes. “It is during REM sleep that dreams occur, and when the frequency or length of REM sleep is inconsistent or disrupted frequently throughout the night, it can impact how much you dream while you are pregnant.” And because you’re getting up more frequently, there’s a better chance that you’re going to remember your dreams.

The bottom line is, though they may be disturbing or just bizarre, having weird, vivid pregnancy dreams is totally normal and typically not cause for concern. If it gets to be too much to handle, definitely bring it up with your doctor, or talk to a friend, partner or therapist.

A version of this story was published July 2019.

Before you go, check out our favorite leggings for working out and laying around: 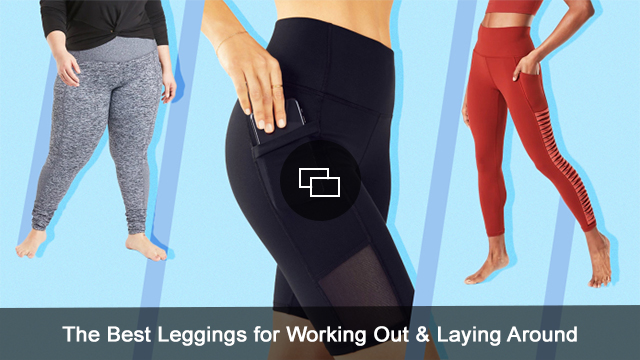