There are a lot of things no one tells you about what your body goes through during and after a miscarriage. After two pregnancy losses, my body had tilted far enough off of its normal axis that my standard 30-day menstrual cycles spiraled to 60-day cycles. It wasn’t until I tried acupuncture for my menstrual cycle that it began to re-standardize.

Right after we celebrated my 30th birthday, I miscarried with what would have been my first child. In the days and months following my miscarriage—and the dilation and cutterage procedure to remove excess tissue in the uterus — I began to heal. Physically, my body was offering the tell-tale signs that it was returning to the swing of things. For one, my period returned like normal and I was feeling more like my pre-pregnancy self. But mentally and emotionally, those wounds were far from healed. The sense of profound loss and mourning was burrowing in my heart for good, adding a twinge of sadness and grief to my life that I was just learning to live with. 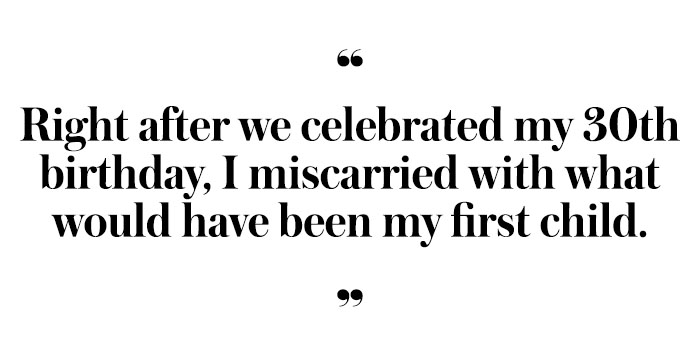 And, as is the case with so many women trying to conceive, this wasn’t my only experience with pregnancy loss. Seven months after that miscarriage, I was pregnant again but things were not proceeding in the typical fashion. A sonogram revealed that I actually had an ectopic pregnancy—this happens when the fertilized egg attaches itself somewhere other than the uterus. Days later, I woke up contorting my body and unable to straighten my back thanks to a blinding and searing pain in the left side of my abdomen. My doctor gave me a methotrexate shot as treatment and sent me home to recover. By all accounts I was perfectly healthy and they said I was simply having “bad luck” this second time around. *Insert eye roll here.*

A little-discussed side effect of pregnancy loss set in about a month after my ectopic pregnancy. My clockwork-like period strayed farther and farther away from its usual 30-day cycle. Checkups and testing didn’t reveal any physical issues, but still my periods lengthened. I didn’t know what to do and wanted to seek natural methods and remedies before turning to hormonal medication. Thankfully, I had my mother to lean on.

An OB-GYN from the former Soviet Union and a board certified licensed acupuncturist, Nana Efrem — aka, my mother — has been practicing acupuncture for nearly three decades, using her extensive knowledge of western reproductive medicine in her traditionally eastern methods. Her advice to me was simple: Stop everything and prioritize normalizing my cycle.

According to womenshealth.gov, 14 percent of U.S. women experience irregular, painful or heavy bleeding during their menstrual cycles. The causes can run the gamut from thyroid problems, eating disorders, polycystic ovary syndrome (PCOS), and everything in between. As my cycle inched towards the 60-day mark, I officially became part of that statistic. Over the next three months, my mother and I met twice a week in her office, midway between our homes in New Jersey and New York City. Having recently added laser acupuncture to her repertoire, each session used a combination of traditional acupuncture needles and cold laser therapy, focusing on my mounting stress, uterine blood flow and circulation and promoting ovulation. 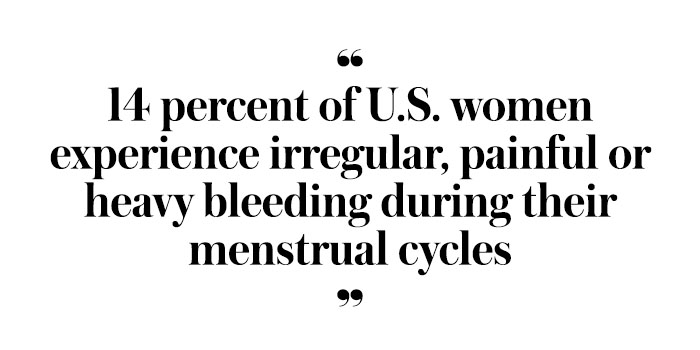 Just like western medicine, traditional Chinese medicine recognizes the staggering side effects stress has on the body. So during each double session, my mother worked to address my emotional state, hormonal imbalance and menstrual irregularities. “It generally takes around three cycles to balance them all out since we don’t just work on external symptoms, we look internally, as well,” she says of the treatment she performed. She stresses it may take less or more cycles, depending on the woman, individual circumstances and underlying issues.

The treatments, in addition to therapy-like chats with the woman who knows me best, did the trick. I found myself relaxing with each session— my anxiety melted away, I slept better at night and, more importantly I no longer blamed myself for what happened. At the same time, a hysterosalpingogram, a procedure that uses X-rays to examine the fallopian tubes and uterus, gave me the all-clear I was looking for.

While further research is necessary, a 2017 study found that acupuncture may improve the frequency of menstrual cycles in women with PCOS. My personal experience with the treatment turned out to be positive, proving the old adage of “mother knows best.”

After twice-weekly treatments over a span of about three months, my cycle was back to normal. Just a few months later, I was pregnant. And shortly thereafter, I was diagnosed with hyperemesis gravidarum and spent the next nine months face-first in a toilet. Again, thankfully, I had my mother to lean on. But that’s another acupuncture story for another day.