Pregnancy is a life-changing event. And once a woman discovers she’s pregnant, not only will she have to adjust her world for a new human, but as she prepares for this new human to enter the world, she will have to make some significant changes to her lifestyle. In fact, there is a laundry list of things to avoid altogether from beauty treatments to physical activity while you’re expecting. Some of these things might even surprise you. These are 16 things you can’t do while pregnant.

“There is little data about the effects of chemicals in the tattoo dye during pregnancy,” says Dr. Niket Sonpal, a New York City-based internist and neuropsychologist. “The main concern of getting a tattoo is the risk of contracting infections such as hepatitis B and HIV. Because of all these concerns it is best to hold off until you have delivered the baby.”

“The first thing I tell every client, member and instructor is that every pregnancy is different,” says Erica Ziel, a pre/post-natal certified fitness specialist and founder of Knocked-Up Fitness. “It doesn’t matter if this is your first pregnancy or sixth pregnancy, there are no two experiences alike. Don’t compare yourself to others or even to a previous pregnancy. Listen to your body because it will tell you what it needs.” That being said, there are a number of exercises you need to be cautious of, or avoid altogether, while pregnant. “Stop doing crunches immediately,” says Ziel. “Crunches are only designed to work the surface muscles and can cause diastasis recti (abdominal separation).” In addition, crunches put unnecessary stress on your neck, hip flexors and back. Instead, Ziel recommends incorporating pelvic tilts, hip rolls and standing cat cows into your daily routine.

Think you can keep your withstanding appointment at the spa while preggers? Think again. According to Dr. Sonpal, while there are a number of beauty treatments you can still continue while pregnant, there are a few that you should skip. Have a facial booked? Sonpal says basic facials are fine but you should avoid chemical peels, hot stones, and electric stimulation until after you’ve had the baby.

Brightening your smile will have to wait until after baby arrives. Professional teeth whitening as well as over-the-counter teeth whitening products are not recommended during pregnancy due to the chemicals used.

Believe it or not, pregnancy is a good time to switch out your white albacore tuna for the less expensive, canned light tuna. “According to the Food and Drug Administration (FDA), albacore tuna typically contains three times more mercury than light tuna,” says Katie Griffin, a Registered Nurse, Lamaze Certified Childbirth Educator, and founder of Kopa Birth. “During pregnancy, mercury can cause damage to baby’s developing neurologic system. If you just can’t make the switch to light canned tuna, the FDA recommends that pregnant women eat no more than six ounces of albacore each week.”

While Botox use by pregnant women hasn’t been largely studied, Sonpal says it’s recommended to avoid any injections until after you give birth.

The reason why mothers-to-be should avoid aromatherapy is because certain essential oils can be toxic to the unborn child, says Dr. Sarah Villafranco, CEO and founder of natural skincare company Osmia. “Internal essential oils should be avoided during pregnancy because taking essential oils by mouth results in the greatest exposure to the developing baby,” she explains. “If you plan to use essential oils orally, you must do so under the guidance of a trained expert. They are potent medicines, and even beautiful, fragrant plants can be toxic.” While other methods of essential oil use, including baths, wash-off products, and leave-on products might be okay, you’ll still want to check with a professional as to which oils are safest and do so with moderation.

According to the American Pregnancy Association, pregnant women should avoid cleaning up after their cat due to toxoplasmosis, a rare but serious blood infection, which may be found in cat feces.

Sonpal says to hold off on these until post-pregnancy. “Saunas can cause hyperthermia (abnormally high body temperature), which can lead to an increased risk of birth defects during the first trimester.”

As you progress through your pregnancy, Ziel says be careful not to over-stretch or go too deep into yoga poses. “Relaxin is a hormone released during pregnancy that relaxes your ligaments throughout your entire body and softens and widens the cervix in preparation for birth,” she explains. “If you overstretch, you can strain or tear those ligaments, causing a lot of unnecessary pain and discomfort.”

There is some debate whether or not wearing high heels is safe for pregnant women. One side says it’s okay to wear heels if you’re used to wearing them every day for work, for example, while the other side says it’s better to be safer than sorry. The American Pregnancy Association says avoiding high heels lowers your increase for varicose veins. Plus, weight gain and hormonal changes during pregnancy have a major impact on the body, since muscles and ligaments can soften and stretch, so you’re more prone to ankle and ligament strains.

“Performing exercises when it causes incontinence (peeing your pants), or coning of your belly can actually damage your pelvic floor and contribute to aches and pains,” says Ziel. Meanwhile, lifting weights can strain your back and pelvis, says Sonpal. “It can also lead to leaking and increases the chances of prolapse (when the uterus slips into the vagina).” If you have to lift anything heavy, Sonpal recommends holding it close to your body. “Slowly bend your knees and do not involve the back or twist while lifting.” If you have had a miscarriage in the past, Sonpal says you must refrain from weight training altogether.

Another favorite item to avoid during pregnancy is your favorite cup of joe. “High caffeine intake during pregnancy has been shown to restrict fetal growth and increase the risk of low birth weight at delivery,” says Sonpal. The American Pregnancy Association reports any amount of caffeine “can also cause changes in your baby’s sleep pattern or normal movement pattern in the later stages of pregnancy.” Additionally, because your baby’s metabolism is still developing, it cannot fully metabolize caffeine, which means your best bet is to avoid any caffeinated drinks, like tea and soda.

“It is a highly dangerous activity during pregnancy,” says Sonpal. “There is the risk of falls, and, you can never predict how a wild horse might react.”

“Pregnant women are 20 times more likely than other adults to get Listeriosis, a bacterial infection that causes flu-like symptoms such as fever, chills, and muscle aches,” says Griffin. “During pregnancy, an infection with Listeria can cause preterm labor or even stillbirth.” Common foods that could be contaminated with Listeria and should be avoided include deli meats, hot dogs, soft cheeses like brie and feta, refrigerated smoked seafood, meat spreads, and raw sprouts.

“When you surface over waters, there are chances for air bubbles to form in your bloodstream, putting you and your baby at risk,” Sonpal says.

While this list might seem like you have to be cautious of a lot in your world while pregnant, the upside, of course, is that as you abide by these precautions the human inside of you will have a higher chance of being healthy. 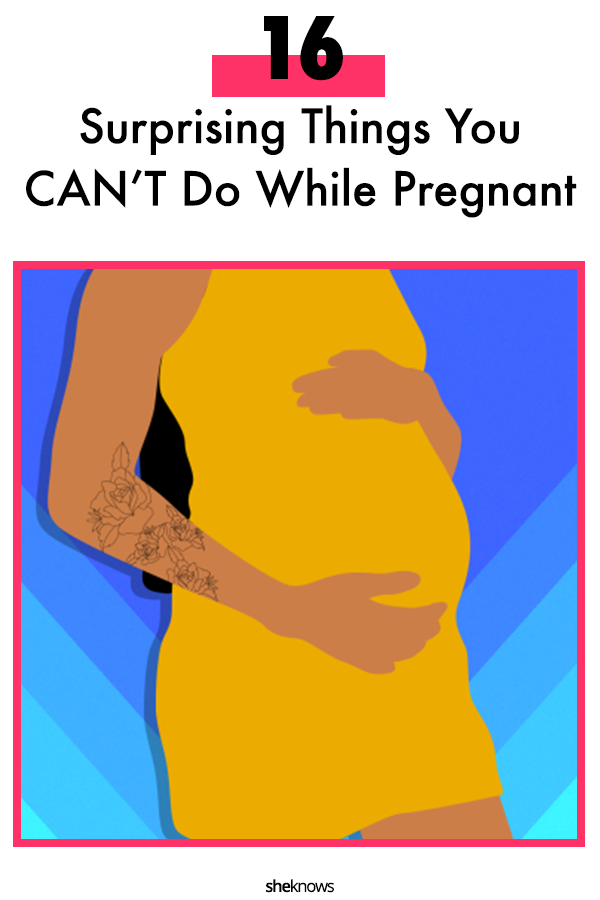 How Coronavirus Could Delay Getting an Abortion in Texas and Ohio