Don’t get me wrong, as a menstruating woman of approximately 18 years, I’m no stranger to my monthly cycle. But after enjoying a year and a half without bloodying a single pair of underwear (save for the few weeks of lochia following the birth of my son — thank God for hospital-grade pads and mesh undies), I wasn’t exactly looking forward to her return.

First: a little bit about what my period was like prior to pregnancy. Before my husband and I started trying to conceive, I had been on the pill for upwards of 12 years. In that time, I bounced around between a few different brands of pill, all of which kept me on a regular 28-day cycle. The last pill I was on was my favorite — on it I only had four sugar pills, so my monthly flow was short and I don’t recall too much cramping. Sounds dreamy, right? 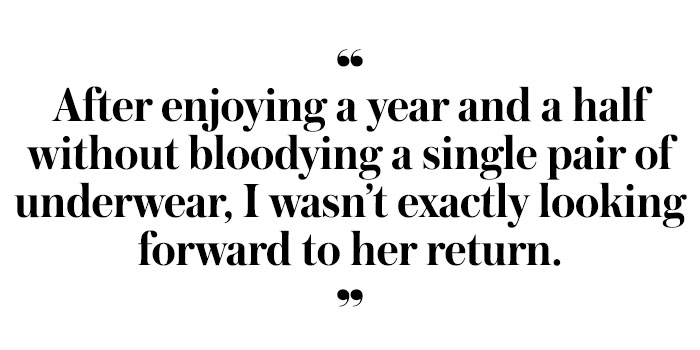 I wasn’t sure what to expect when I went off the pill, but my body pretty quickly fell into the rhythm of a 30-day cycle. After years of being on hormonal birth control that suppressed some of the less favorable menstrual symptoms, I immediately noticed that my unregulated cycle was longer than I was used to (5-7 days instead of 4 days), my flow was heavier than before (I needed to change my tampons more often, or start buying more absorbant ones) and my cramps were much more painful in the first 24 hours of bleeding (hello, ibuprofen!). Over the months, I adapted and adjusted to this new normal.

In October of 2017, I found out I was pregnant. By that point, I was off the pill for about a year and could practically set a clock to my 30-day period. Naturally, that meant I was first tipped off to the pregnancy because I was late. The Type-A planner in me has all of this meticulously documented so that when the time would come for Aunt Flow to resume her monthly visits, I’d be ready and waiting for her. But as with so many things you learn in mommyhood (basically, baptism through sleep deprivation and diaper blowouts), I should have been prepared to expect the unexpected. Here, three things I learned from my first postpartum period.

Breastfeeding can delay the inevitable

Throughout my pregnancy I had what I considered to be very reasonable expectations for how I would feed my son. I would aim to breastfeed, but I knew that it would be tough (just how tough is a different subject for a different article) and I knew that there was a chance it might not work out for a number of reasons outside of my control. So I tried to put as little pressure on myself as possible, while also reading article after article about the numerous benefits of breastfeeding. And I’m secure enough in myself to admit that out of pure vanity, the one that always appealed to me the most was that it would help me lose the baby weight (#sorrynotsorry). After all, breastfeeding burns 500 or so calories a day.

But you know what else breastfeeding can do? Yep, it can delay the inevitable. And by inevitable, I mean, of course, your period. When you exclusively breastfeed your baby at least every four hours during the day and every six hours at night, your body stops ovulating. This lactational amenorrhea keeps breastfeeding women from having their period. In fact, relying on the lactational amenorrhea method of birth control can be as effective as other forms of birth control — only approximately 2 out of 100 women who exclusively breastfeed, and do so on demand for the first six months of their baby’s life, may become pregnant.

I exclusively breastfed my son for the duration of my 12-week maternity leave. After that, I became a pumping, working mom. But my milk production and pumping schedule didn’t quite measure up to my growing boy’s appetite, so we quickly began supplementing with formula. In going this route, my body was no longer truly in lactational amenorrhea. But my body still suppressed the functions that cause menstruation.

I slowly started weaning off both the pump and breast around the holidays and by mid-January had put all milk expression behind me. About a month later, on February 14, my period returned — in all her panty-ruining glory.

It might remind you of your very first period

When I was 12 and got my very first period, I distinctly remember the day because I was wearing khakis at school and I had my 7th-grade cotillion that night. At the first site of blood in my middle school bathroom, I crafted a toilet paper pad and prayed I’d make it home without my light pants betraying me (luckily, they didn’t).

In my years on the pill, I always knew exactly when to anticipate my period and was always prepared. In the year before I got pregnant, I became very good at the anticipation game. Thinx and panty liners were my BFFs. But after baby? All bets were off. I really had no clue as to when I’d get my period. Ever the Girl Scout, I tried to be as prepared as possible and had a tampon discreetly tucked into my wallet at all times once I stopped breastfeeding and pumping. I knew it wouldn’t be that long before I rejoined the ranks of menstruating women.

When the time came, my preparation only half paid off. Because who takes their wallet to the office bathroom with them every single time? Not this gal. So on Valentine’s Day when I stared down at the blood tinged gusset, I made the same toilet paper pad 12-year-old me made, said a prayer and hustled back to my desk. At least this time I was wearing black jeans and had a tampon nearby.

The first cycle (or few) may be irregular

And if you’re me, it’s highly irregular. It was naive of me to assume that I would just fall right back into my 30-day rhythm. And while I knew might not snap right back to my usual groove, I didn’t think my body would stray too far from it. But by day 33, without as much as some light spotting, I was getting nervous. So nervous, in fact, that I hunted down the last remaining pregnancy test in our house and took it.

My husband and I had been safe — we used barrier protection, as advised by my OB-GYN — but my Type-A was showing. The test was negative, and I immediately started Googling anything and everything about the length of postpartum cycles. According to the Cleveland Clinic, the first few postpartum periods may be irregular. Unfortunately, there isn’t a great rule of thumb for how irregular they may be. The American College of Obstetricians and Gynecologists simply advises that they “may be longer or shorter” and “they’ll slowly return to normal.” Then, on day 39, she popped up again.

On day 7 of the new cycle, a week later, I had my IUD placed. I know I have to wait a little bit longer before my body settles into another rhythm as far as cycles are concerned, but the obsessive planner in me is happy that some semblance of period normalcy is on the horizon.