As my two daughters like to remind me, I went a little overboard talking to them about sex and consent and anatomical terms when they were young. In my defense, I wanted to make sure they knew all the things I had to discover on my own, long before they ever needed the information. I wanted them to know they could come to me to talk birds and bees — or the definition of a BJ. But I may have dropped the ball on another big B: body hair.

Related story Yes, I Prioritize My Middle Child — Here's Why

Admittedly, I’ve never had a complicated relationship with my body hair — probably because I was fortunate enough to have a mother who had no strong feelings about her body hair herself. She shaved her legs and armpits occasionally, as I recall, but it wasn’t something she seemed to give much thought to. It wasn’t a taboo subject for us; body hair was just something of a nonissue. “Just don’t shave your arms,” she said mildly. “You don’t want to do that.” She never told me why.

I remember the wiry, prickly stubble that would grow in on her pale legs a few days after she had shaved and wanting to touch it. Or am I remembering my own legs after I shaved? Mothers and daughters can be funny like that, the body parts sometimes interchangeable in memory.

In the sixth grade, I began surreptitiously studying my schoolmates’ legs — easy to do in a Catholic school, where everyone is wearing plaid skirts and knee socks shoved down to their ankles. I took note that many of us still had baby-soft down on our legs, the stuff we’d grown accustomed to (and that now was being joined by less appealing coarse pubic hair). But I also saw that a few bold sixth-grade girls were now smooth and hairless. We were about to become the Nair generation, worried to death about short shorts — and what men might think of us, unshaven, in short shorts.

It was a buzzing pale-blue Schick electric razor that took my leg hair’s virginity. I was at my best friend’s house in seventh grade, and we’d come across the razor in her mom’s bathroom. We knew it was just a matter of time; why wait? Giddy with the brazenness of our own spontaneity, we took turns swiping the razor up and down our legs — but only up to our knees. Good girls, we thought, waited to shave their thighs. That was a high school thing, we decided. The act of shaving was addictive, mesmerizing. Dark fuzz fell around us onto her bedroom carpet, and we marveled at the smoothness of our skin. Who were we?

Her mother — unlike mine — noticed immediately that our summer legs were hairless for the first time. She was not happy. “Look what you’ve done! You’ll never get it back!” she yelled. “Now it will come in heavier and darker!”

We tried to shrug off her obvious horror. We were cool, silky-legged creatures. By the time boys entered my white, straight-cis-girl picture in high school, my best friend and I were pros at shaving the backs of our thighs and pits and ankles without mortal wounds. We commiserated with other girls over the dreaded bikini line. What was the best way to get rid of it? Cream? Wax? Tweezers? Razors? And what to do about razor bumps?

When I had two girls of my own later in life, I knew there would be all sorts of discussions about, well, everything. I was a single mom for most of their childhoods, so our all-girl household made for a lively and free forum for discussing everything from feminism to sexual preferences. No one ever locked the only bathroom door; we were constantly zipping in and out of rooms in various stages of undress to grab a brush, a pair of pants, a hair tie. 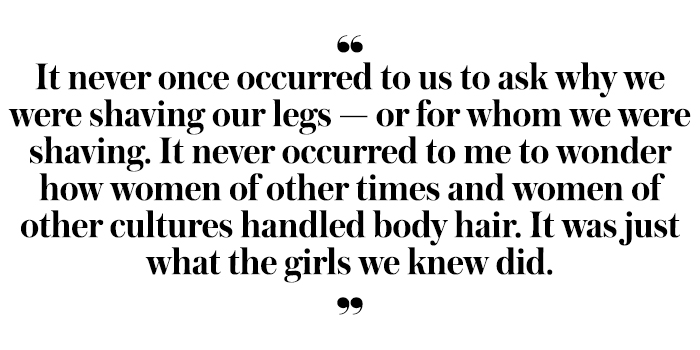 Sure, I noticed the new hair on them, sprouting out from under their arms and their underpants, but I said nothing until they began to ask me about it. The questions kept coming: “When did you get this weird hair? What did you do? Can you cut it? When did you shave it for the first time? Do you still shave? Am I extra-hairy, or is this normal?”

Finally, my older daughter asked the hard question I’d never considered myself: “Why do women do this?”

So we examined that big why together, the three of us. Who gives anyone the right to expect another human to remove their natural body hair? Why do men care if women wax to a nearly prepubescent look or grow long and curly down there? Why do hairy-backed and hairy-assed men’s preferences matter to women? What does it mean to shave it all off? Or legs but not armpits? Can you be a feminist and still like the feel of shaved legs?

It was an ongoing conversation — in fact, it’s still going. They’ve done most of the talking; I’ve done more of the listening. I waited as they decided how to handle their own body hair, then tried to be matter-of-fact about helping them with the basics, like holding a razor or how much shaving cream to use.

“What did I tell you about body hair?” I texted them yesterday. “Did I give any sort of advice at all when you first started talking about shaving?”

My younger daughter, 15, wrote, “You said whenever you are ready.”

I asked, “Did I seem to care either way?”

“Nah,” my younger replied, “you were and are chill.”

My older daughter, 17, texted: “NEVER SHAVE YOUR ARMS. Never. Or they will fall off basically.”

“What else do you remember us talking about?” I pressed.

“How ur scared of Nair,” 17 wrote back. “And the one time I used Nair on my bikini anyway and got a chemical burn before my opening night.”

“So basically I made very little impression on you when it came to body hair,” I asked.

“Except you traumatized me about arm hair,” 17 said.

“Yah put that in, that was the only thing we were not allowed to shave,” 15 agreed. “And reference the episode of Bob’s Burgers where Tina says goodbye to one side of hair on one leg. It’s funny, look it up. Like the hairs are her babies, that’s kinda how I felt.”

Ms. 17 rarely shaves. Her armpits are poufy, badass, dark wonders. Ms. 15 is a dancer who shaves armpits and legs. She’s steering clear of the bikini line as much as her leotards will let her.

No one in our household is shaving her arms. No one seems scarred — either physically or emotionally — from shaving or not. The Nair was pretty scary, though.

The moral of the story as I see it? Listen long and hard to your girls. Encourage them to own their own bodies and whatever they’d like to do with them. But maybe chill out on the arm-shaving doom.

A version of this story was published January 2019.

Before you go, read up on some puberty books that today’s kids need to read.