After you give birth, you can get pregnant even before your period returns! It’s smart to plan ahead, and to research your options for birth control. Here we take a look at three female barrier contraceptive methods: the diaphragm, cervical cap and the female condom, as well as spermicides. 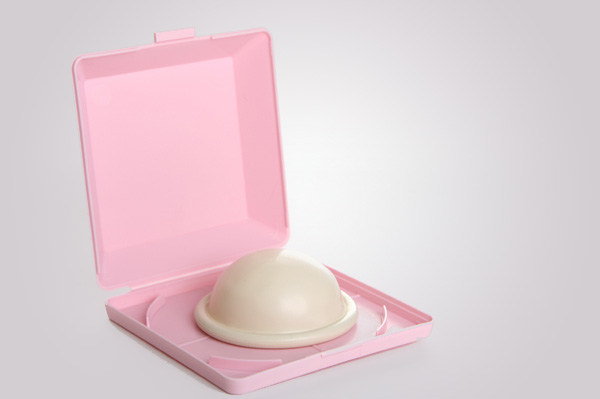 Available by prescription only and sized by a health professional to achieve a proper fit, the diaphragm has a dual mechanism to prevent pregnancy. A dome-shaped rubber disk with a flexible rim
covers the cervix so sperm can’t reach the uterus, while a spermicide applied to the diaphragm before insertion kills sperm.

The diaphragm protects for six hours. For intercourse after the six-hour period, or for repeated intercourse within this period, fresh spermicide should be placed in the vagina with the diaphragm
still in place. The diaphragm should be left in place for at least six hours after the last intercourse but not for longer than a total of 24 hours because of the risk of toxic shock syndrome
(TSS), a rare but potentially fatal infection. Symptoms of TSS include sudden fever, stomach upset, sunburn-like rash, and a drop in blood pressure.

The cap is a soft rubber cup with a round rim, sized by a health professional to fit snugly around the cervix. It is available by prescription only and, like the diaphragm, is used with spermicide.

It protects for 48 hours and for multiple acts of intercourse within this time. Wearing it for more than 48 hours is not recommended because of the risk, though low, of toxic shock syndrome. Also,
with prolonged use of two or more days, the cap may cause an unpleasant vaginal odor or discharge in some women.

The Reality Female Condom, approved by FDA in April 1993, consists of a lubricated polyurethane sheath shaped similarly to the male condom. The closed end, which has a flexible ring, is inserted
into the vagina, while the open end remains outside, partially covering the labia.

The female condom, like the male condom, is available without a prescription and is intended for one-time use. It should not be used together with a male condom because they may not both stay in
place.

Studies have not produced definitive data on the efficacy of spermicides alone, but according to the authors of Contraceptive Technology, a leading resource for contraceptive information, the
failure rate for typical users may be 21 percent per year.

Package instructions must be carefully followed because some spermicide products require the couple to wait 10 minutes or more after inserting the spermicide before having sex. One dose of
spermicide is usually effective for one hour. For repeated intercourse, additional spermicide must be applied. And after intercourse, the spermicide has to remain in place for at least six to eight
hours to ensure that all sperm are killed. The woman should not douche or rinse the vagina during this time.