Every marriage has its ups and downs. Stressors such as having children, career demands, issues with in-laws and money worries can take a toll on even the most solid relationships. But there’s a difference between having problems or even some unhealthy patterns in your relationship and a marriage that’s straight-up toxic. According to a recent study conducted by researchers at the Universities of Michigan and Nevada, a toxic marriage with frequent conflict can affect your health in some serious ways — and may even be as bad for you as smoking.

Kiaundra Jackson, licensed marriage and family therapist and author of The Art of Healthy Relationships: 7 Components Every Relationship Should Have to Thrive, tells SheKnows that first, it’s important to know the signs of a toxic relationship and know when it’s time to get professional help. Controlling behaviors; extreme jealousy; and verbal, physical and emotional abuse are all major red flags, she explains.

“Being in a toxic marriage can result in physical and emotional abuse, low self-esteem, increased anxiety levels and even depression,” Jackson says. When these mental health issues are prevalent, it affects all aspects of our lives, like the ability to parent well, go to work and spend meaningful time with the people we love. On top of that, bad marriages can also cause changes in our eating and sleeping habits, she adds.

If you feel protective of your toxic partner or feel like you need to conceal their abusive behaviors so family and friends don’t know what’s really happening in your relationship, this can also lead to feelings of loneliness and isolation, clinical psychologist Dr. Deborah Offner tells SheKnows.

And yes, all these factors can impact your mental and physical health.

What does a toxic marriage do to your health & well-being?

A toxic marriage has passed the point of simply being unhealthy to being detrimental to you and your overall well-being, Jackson says, noting that bad marriages increase stress and potentially lead to higher cortisol levels. This uptick in cortisol can negatively affect the immune system, cardiovascular health and blood sugar.

Similarly, Offner explains, “A toxic marriage can affect your mental and physical health more than perhaps any other factor in your life.” She also notes that toxic marriages frequently lead to confusion, anger, sadness, depression and anxiety, and can also result in social isolation and loneliness.

“People assume you’re getting your needs met by your spouse and may not think you need them to be as available to you,” she says. This can result in feeling isolated from other family and friends.

“Social isolation, depression and anxiety — as well as the general deprivation and strain of a toxic relationship — make us vulnerable to fatigue, headaches, gastrointestinal distress, excessive weight gain or weight loss and disrupted sleep,” Offner says, noting that in extreme cases, a toxic marriage may also lead to high blood pressure or heart disease.

If a relationship becomes abusive, the physical and mental health consequences can be severe, Offner adds. It’s also important to note, “It’s not just men who mistreat women when it comes to the emotional side of relationships. Some people are surprised to learn that men can be subject to controlling, dominating and aggressive female partners.”

What to do if you’re in a toxic marriage

While studies show happy marriages can offer health benefits, conflict-ridden ones can be profoundly detrimental to overall well-being. Jackson states that toxic elements in a marriage might mean the relationship is “at the point of no return,” but hope isn’t necessarily lost if both partners are willing to do some work.

“It all depends on what type of toxicity is present and if all parties involved are willing to put in the necessary work to change and repair the damage,” she explains. While perfection isn’t a realistic goal in relationships, she says both parties need to be 100 percent willing to work on improving their marriage and also recommends marriage counseling in order to assess and repair any damage.

More: What to Do if You Realize You’re a Toxic Person

“Clearly, what the couple has been doing by themselves has not worked thus far,” Jackson says. “A neutral, objective person would be most beneficial in providing them with actionable steps and techniques.”

According to Offner, in order for a marriage to get back on track, both partners have to be able to accept responsibility for relationship difficulties and be able to learn and change. “In almost all cases, couple’s therapy will be essential,” she says. “This often involves each partner coming to a better understanding of his/her own family of origin, parents’ relationship and established psychological patterns and defenses that will likely need to be disrupted in order for the current relationship to improve.”

More: Are You in a Toxic Relationship? Look Out for These 6 Signs

If you find your committed partnership is chronically conflict-ridden, it’s probably time to reassess and get support. “There’s help out there,” Offner says. “A therapist can enable you to sort out whether your relationship is indeed toxic, and if so, how and why.”

Jackson adds that she encourages couples to “exhaust all avenues before calling it quits” if your marriage is on the rocks. “Read books, go to counseling, attend marriage retreats, complete classes. Do everything within your human power to make sure that you will have no regrets if the relationship ends anyway after all your efforts.”

That said, if both parties aren’t equally committed to healing the relationship and the hurtful behaviors persist, it might be time to leave your toxic marriage behind. 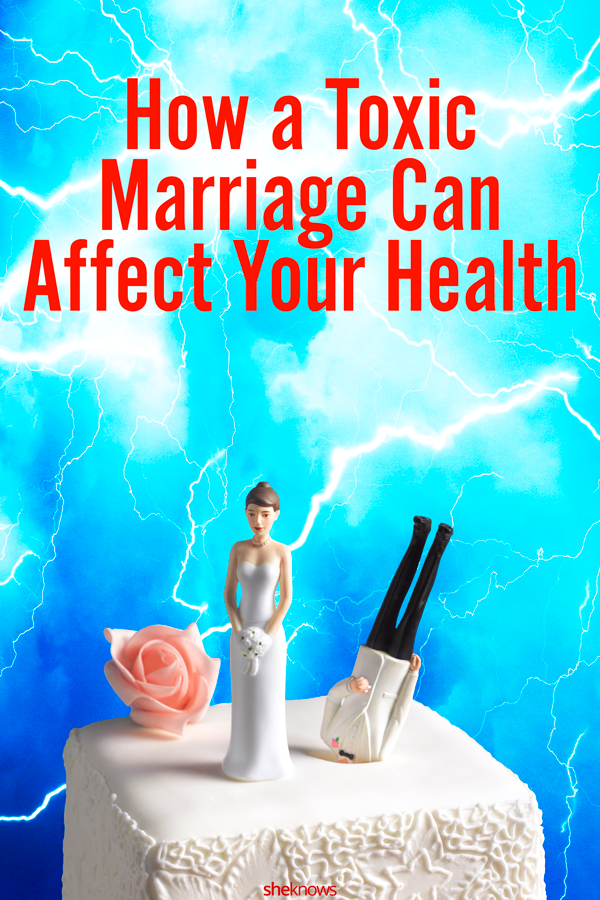 3 hrs ago
by Gina Escandon