We all have fears, whether it’s a fear of heights or a fear of spiders. But when we obsess over our fears, we tend to do everything possible to prevent them from becoming our reality, and that obsession can be debilitating.

Sara Gordon, 28, can certainly attest to this, as she knows firsthand what it’s like to have your fears invade every moment of your consciousness. At the age of 13, Gordon was formally diagnosed with obsessive-compulsive disorder, though her OCD-like behaviors began much earlier.

“I was a young hoarder,” Gordon tells SheKnows. “I would pick things off the street and save them because I thought they were cool — a piece of a tire, an old yogurt container — really just anything lying around.”

Though this may seem like one of those strange phases children overcome, hoarding is one of the early detection signs of OCD (after much research in 2012, the DSM-5 introduced hoarding disorder to make a distinction between hoarding in the context of OCD and hoarding in isolation). After months of hoarding, Gordon’s OCD began to manifest in new ways as she entered into the eighth grade.

More: Brain Fog Is Real — Here’s How to Deal With It

“I always thought that things were sticky,” she recalls. “One day, I asked my mother, ‘Does this pen feel sticky to you?’ and that was when she knew it was OCD.”

Having tactile issues is another sign of OCD, so with two common symptoms, Gordon’s family began to draw conclusions.

“I would wash my hands at least three times during one class period,” says Gordon about her time in middle school. “One time, a kid asked me for a pen, and I just started crying… because I didn’t want him to contaminate it.”

The following summer, Gordon grew increasing symptomatic with more rituals and odd behaviors, including three-hour showers every night, which only evoked more stress and anxiety.

“My shower prep took an hour because I had to make sure the towel didn’t touch anything or anyone — even me,” she explains. “I had to put my loofa in the microwave to sanitize it. I wouldn’t comb my hair because the comb would be ‘dirty.’”

With all the stress of performing seemingly simple everyday tasks, Gordon began to experience daily meltdowns, and at this time, she grew suicidal. “I would ask my parents to kill me every night because I just couldn’t deal with this,” she notes. 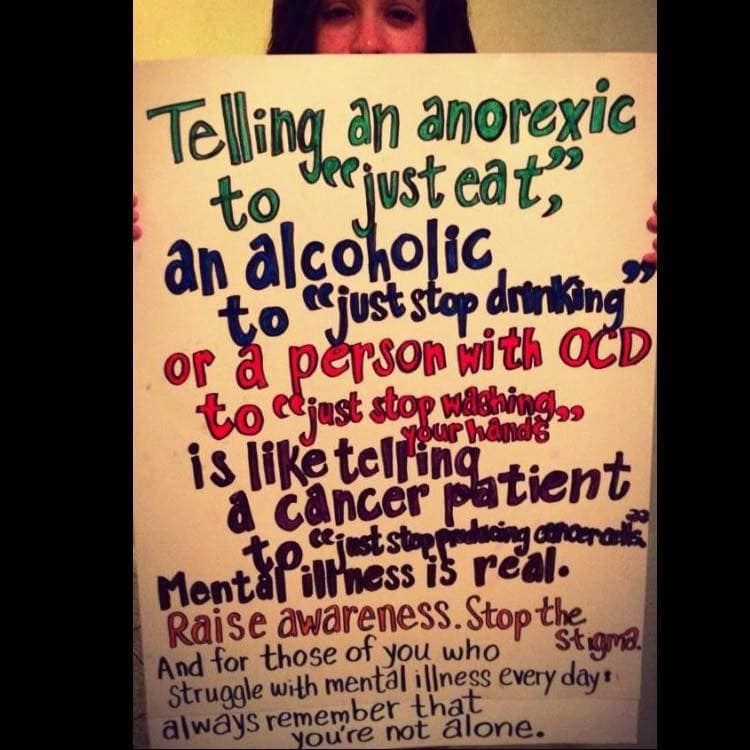 Though Gordon had been in therapy since she was 5 years old, her parents now turned to OCD specialists at a treatment center in Long Island. For six days every week, Gordon’s family would take a four-hour round trip to seek proper help, but as the obsessions grew worse, Gordon — who had been at the top her class for most of her life — began to struggle academically.

Since she couldn’t touch anything, reading became an impossible feat. “Every time I turned a page, I’d have to wash my hands,” she explains. “I couldn’t concentrate or maintain focus. I couldn’t learn and retain information.”

With trips to Long Island proving to be futile, Gordon’s doctors and parents agreed to take the next step: hospitalization. With one week’s notice, Gordon had to pack her bags, and her heartbroken parents reluctantly dropped her off at a psychiatric facility halfway across the country. After a five-month stay with no progress, Gordon headed to another in-patient facility, but this time in Utah, where she remained for 11 months and managed to reclaim her life.

After successfully completing the program, Gordon returned to her family on the East Coast and finished her schooling. She then went on to college and achieved great success, graduating with a perfect GPA and an acceptance to Harvard University’s Graduate School of Education. But college certainly wasn’t easy.

Though Gordon managed to work through her obsessions and compulsions for most of her undergraduate studies, during her final semester, the OCD returned to its former severity. Around this time, Gordon’s mother had viewed a segment on deep brain stimulation on the Today Show, and after some research, she contacted Dr. Wayne Goodman at Mount Sinai.

Six months after college graduation, Gordon had her first consultation with Goodman to discuss the option of brain surgery for OCD.

DBS has been used to treat Parkinson’s disease since 1987, but on Feb. 19, 2008, the FDA approved its use for refractory OCD. However, it certainly isn’t easy to qualify for it. To be eligible, the patient must have a documented diagnosis of OCD for at least five years; tested 35 or above on the Yale/Brown Obsessive Compulsive Scale; failed to improve from a minimum of three selective serotonin reuptake inhibitors, clomipramine and augmentation with a minimum of two antipsychotics; and failed to progress from a specific number of cognitive behavior therapy and exposure and response-prevention therapy.
Since Gordon has tried more than 30 medications for OCD, had been through various types of therapies for more than a decade and had tested 38 on the YBOCS, she qualified as a candidate, but she was still required to undergo brain scans, MRIs and other testing at least once per week prior to her approval. In March of 2014, Gordon was officially approved for the surgery, and after a long, difficult battle with insurance, she underwent the first of three surgical rounds on June 25, 2014.

In the first round, electrodes — serving as digital drugs — are implanted on the left side of the brain, and one month later, they’re implanted on the right (though some surgeons will implant both sides at once). A week later, two pacemakers, which regulate the electrochemical signals to the brain, are implanted under each collarbone along with the batteries — which must be surgically replaced every three years if non-rechargeable and every 10 years if rechargeable. Each surgery lasts for three to four hours, and for 30 minutes during the operation, you will be awakened and asked to rate your mood, anxiety and energy levels.

One week after the final round, Gordon returned to the hospital for Goodman to program and activate her implanted device.

“During programming, you give feedback,” Gordon explains. “If they change a setting, I can feel super-anxious. One time, they turned off the device without telling me just to see what would happen, and I started bawling for no apparent reason.”

Gordon can reprogram the device on her own by using a remote, but as she has learned, improper programming can be detrimental.

More: What You Need to Know About Postpartum OCD

“When I was at Harvard, I tried seeing a doctor for help with programming, but whatever he changed made me feel suicidal. I immediately called Dr. Goodman, and he had me change three settings, which definitely helped,” she says.

But as with any major surgery, there are some limitations. Because of the bald patches over the incisions, Gordon can’t wear certain hairstyles and can’t use a comb on her scalp. She also can’t scratch or put too much pressure on her head, and she has to be aware of the shirts she wears, as a low-cut shirt could reveal her pacemaker incisions.
Since her device runs on batteries, she has to recharge every night, and that process can last for hours during which she cannot move. But if her device loses all charge, she has to call a Medtronic representative for a jump-start.

Traveling has also become an issue. Gordon must always remember to bring her charger, which is quite large, and not to walk through any metal detectors.

“People tell me that I’m so brave, but I always say that I had no choice,” she says.

Three weeks after receiving her device, Gordon began her graduate studies at Harvard University. She graduated from the School of Education in May of 2015 and now works as a college counselor for Collegewise in Harrington Park, New Jersey. She devotes her spare time to raising awareness for mental health and advocating for organizations such as the National Eating Disorders Association, the International OCD Foundation and the American Foundation for Suicide Prevention.

Though the device has helped Gordon manage her OCD, she continues to take psychiatric medications and regularly attends therapy sessions. When asked if she regrets the surgery, Gordon adamantly said no.