From a young age, we’re conditioned to have a narrow view of what is considered beautiful and healthy. In both cases, being thin is a crucial component. But this goes beyond beauty to actively stigmatizing people who don’t look a certain way, especially when it comes to those of us with larger bodies. And whether or not we’re comfortable admitting it, being thin comes with its own set of privileges.

If you’re not familiar with the concept, thin privilege is the idea that society is inherently structured around the needs of people with slimmer bodies, and as a result, those of us with larger bodies do not share the same set of benefits. It’s the other side of fat stigma and phobia.

Some aspects of thin privilege are obvious, like never having to worry about fitting onto a single seat on the bus or whether you’ll need an extender for the seatbelt in an airplane. Other parts are frequently overlooked, like the fact that larger-bodied people — especially women — are less likely to be hired for jobs according to a 2016 study in Frontiers in Psychology. And when we do find work, we’re often paid less.

Thin privilege is being able to talk about how much you love to eat junk food or posting photos of yourself on social media with a giant slice of pizza and having people think it’s cute instead of criticizing you for your poor dietary choices. 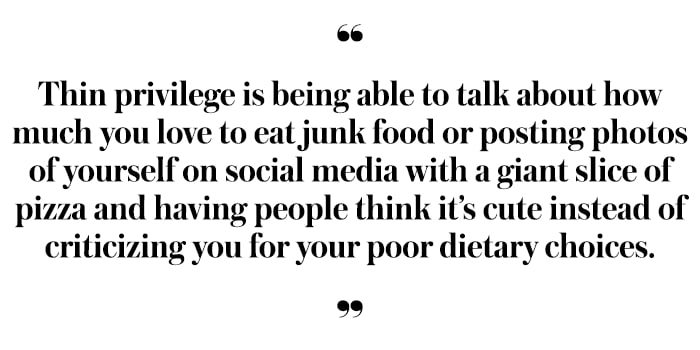 It’s getting to waltz into virtually any store and find something that fits you right off the rack. It’s being able to buy a reasonably priced bra without having to go to a specialty store. It’s being able to take emergency contraception if you need to and not worrying about whether your weight will impact its efficacy. It’s being able to turn on the TV and see other bodies that look like yours as the norm and not being the butt of jokes because of your size.

Thin privilege is being able to walk down the street or take public transit without someone calling you a “fat bitch” for no reason. And it’s being able to exist without seemingly well-meaning people letting you know that they’re concerned about you and your size and commenting on what you’re eating.

More: Why Jameela Jamil’s “I Weigh” Movement Is About So Much More Than Body Positivity

But they’re just helping, right? Because part of the stereotype is that larger people are less intelligent too, so maybe we don’t know that society deems our body type to be unhealthy, and we’re just waiting for someone to point it out. But we own mirrors. We know what we look like, and we know how and what we should be eating.

Of course, this isn’t to say that some people don’t receive criticism at the other end of the spectrum. If they are perceived to be too thin, they may hear things like, “Eat a cheeseburger!” — as if it were that easy. The bottom line is that if our bodies don’t fit within the extremely narrow societal definitions of health and beauty, some people believe they have the right to weigh in. To clarify: They don’t.

The impact of thin privilege goes far beyond having to squeeze into a bridesmaid’s dress three sizes too tight because that’s as big as they come — it also affects our mental health. According to Dr. Kristen Fuller, a physician at the Center for Discovery — which provides treatment for mental health disorders, eating disorders and substance abuse — a side effect of thin privilege for larger-bodied individuals can be body-shaming, which in turn can negatively impact an individual’s mental health, leading to depression, self-harm, suicidal thoughts and/or eating disorders.

“Growing up in the United States in front of a mirror can ingrain the conventional notions of beauty and can result in deep-seated self-esteem issues,” Fuller tells SheKnows. 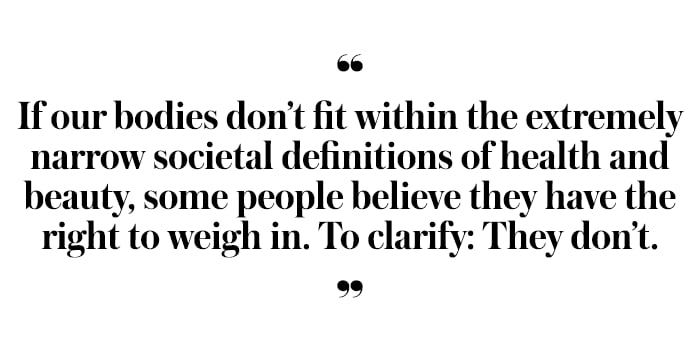 Those of us with larger bodies are constantly made to feel like outsiders, which can take a toll on our mental health, Annina Schmid, a feminist counselor who specializes in eating disorders and substance abuse, tells SheKnows.

“People in larger bodies — who often suffer from being fat-shamed, stigmatized and excluded from their childhood on — experience a long list of negative [physical] health and mental health consequences as people in thinner bodies are receiving preferential treatment wherever they go,” Schmid explains. “Weight stigma and weight discrimination can lead to eating disorders, anxiety, depression and various other mental health conditions that will negatively impact the quality of life of people in larger bodies.”

We should also be mindful that the effects of thin privilege can be even more pronounced for already-marginalized communities, like people of color, those with disabilities and LGBTQ individuals.

More: Why Weight Is an Unspoken Problem in the Transgender Community

And it’s not only higher-weight people who are negatively impacted by thin privilege: Karen R. Koenig, a licensed clinical social worker and eating psychology expert, tells SheKnows that it is damaging to people of all sizes and shapes. For instance, thin privilege may make lower-weight people think that they’re better than higher-weight individuals — because society tells them that this is true — reinforcing the need to be and stay thin and the fear of gaining weight, she explains.

In fact, Koenig says that lower-weight people may buy into feeling superior and continue to act that way, knowing full well that things could be different if they gain weight. “This makes them feel a need to take advantage of what it gets them at lower weights,” she notes. 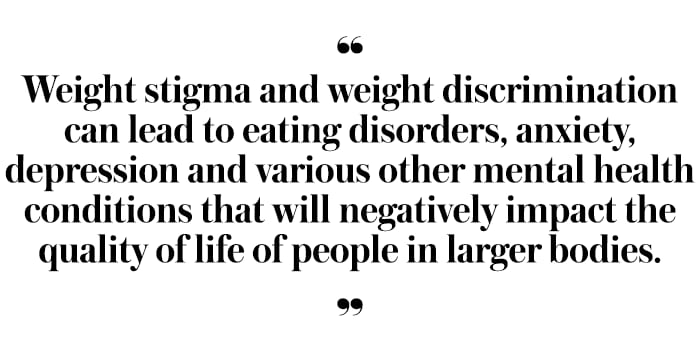 On the flip side, being slim in “thin-is-in” cultures affords people with these body types certain privileges that come with great power, feminist psychotherapist Natasha Sandy tells SheKnows. If people find themselves in these positions of power, she argues that they should take a step back and assess the situation, then do what they are able with this unearned privilege they have and use it for good — responsibly, respectfully and in the name of equality and equity.

One example of someone doing exactly this is The Good Place actor Jameela Jamil’s “I Weigh” movement — an Instagram page she curates featuring people posting photos of themselves with descriptions of how they see their value. (Spoiler: It never involves their weight.) In only six months, the account has amassed 157,000 followers, indicating how much this message has resonated.

But you don’t need that type of platform to help make change. The rest of us can continue to call out systemic injustices when we see or experience them or at least try not to add to them in any way. In other words, if you feel compelled to comment on someone’s weight — don’t.

5 hrs ago
by Sara Dobie Bauer