I’d spent more time mulling over this decision than I had about pretty much anything thus far in my life. I was really scared. It had been almost 30 years since I had eaten meat. But finally, the day had arrived. I bought a bone to make some broth. It was grass-fed, pasture-raised, hormone-free, local… expensive. It ticked all the right boxes.

But I didn’t want to buy my first soup bone in three decades from just anyone. I had done my research and narrowed it down to the first New York City green market to become Animal Welfare Approved. I spent so much time talking to this one farmer, he began to feel a bit like my therapist. The guy who raised that bone (I was not yet ready to identify it fully as a living being) had packed in his work in hotel management after reading Michael Pollan’s Omnivore’s Dilemma so he could become a grass farmer. I was in good hands.

More:  Why You May Want to Go Alcohol-Free Once a Week

I brought my bone home and looked at it. I knew it needed a few companions, so out I went to buy the most interesting and tasty vegetables I could think of. This broth was going to be epic, and it was going to make me feel so much better.

I heated the oven and went over the kind farmer’s instructions a few more times in my head. And then I stopped and had a moment. “Thank you cow,” I thought to myself. “Thank you, thank you, thank you. And I’m sorry.” I had a little cry, and then I turned it inward. “Thank you body, and I’m sorry I haven’t always nourished you the way you fully deserved, but I am going to make it up to you.” Here’s how that happened.

About six months into living as a grown-up in the real world (i.e., no longer eating healthy home cooking) I started dating a vegetarian. Having grown up with farming grandparents, the only experience I’d had with farming up to that point revolved around the humane and ethical treatment of animals. (Imagine rolling hills, picking potatoes, walks in the woods and a dog named Shep.)

But my world was crushed when this boyfriend presented me with images of factory farming. From that day on, I vowed never to eat meat again. I just stopped like that. Overnight. 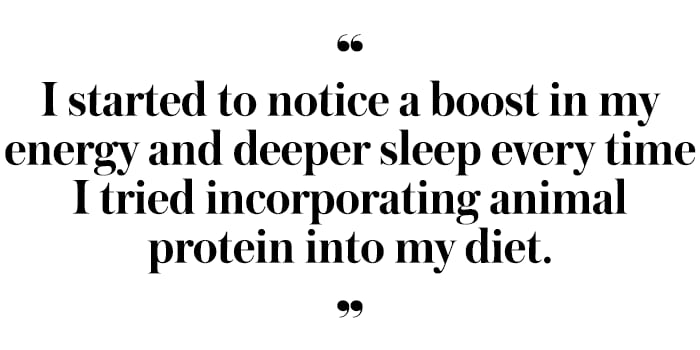 Someone at work gave me a 1980s vegetarian cookbook, which I can honestly say I’ve not made a single recipe from, but it does have a certain vintage flair to it now. Instead, I doodled the inside covers with teenage graffiti, including: “Meat is murder,” “Ban the bomb,” “Flower power” and the ever-popular “Peace and love!”

Nothing changed that much in my diet. I still ate mostly bread and potatoes and “cheese pasties” for variety. A couple of years later, I moved to New York City to be an au pair, and it was here that I started to explore what a “healthy vegetarian diet” could look like.

And it suited me for a really long time. I learned what greens were, and they soon became my favorite food group. I studied nutrition. I discovered plant-based recipes that would have the most carnivorous of carnivores licking their plates. I was entirely content and really wasn’t questioning at all whether I should “go to the other side.”

But after almost 30 years of being meat-free, I started listening to my body and the suggestions of some health professionals I worked with. My energy was dropping, and my skin was extremely dry. I knew in my core I had to tweak my diet. And that might mean including foods that had been taboo to me for so long.

This sounds like a coming-out story, and I tiptoed into it with a little trepidation because I didn’t have a mad craving for red meat. It didn’t happen to me like it did for so many of my vegetarian friends who found they were dreaming of burgers or who craved steak while they were pregnant and then never looked back.

For me, it was much more subtle, and I am still wary of saying, “I sometimes eat meat” out loud. But after having health issues that caused my body not to absorb nutrients properly for a number of years, I found out at age 48 that I have thin bones.

As a holistic wellness counselor who very much believes in bio-individuality and the fact that we need different foods during different life chapters, I had to walk my talk and honor that this was what my body was asking for. I had already removed all things gluten from my diet and was doing much better without grains, but still, my body was crying out for something.

In the beginning, there was bone broth

So it began with bone broth, heavily disguised with beets, garlic, ginger and about as many flavorful veggies as I could think of. It was slow-simmered for about 24 hours. I found it delicious entirely because I didn’t taste any of the meat flavor.

A few months later I dabbled again, and then again. I started to notice a boost in my energy and deeper sleep every time I tried incorporating animal protein into my diet. After sharing this with some close friends who are equally interested in food and health as my husband and I are, they came over to dinner and made a chicken. In my oven.  “I’ll just have a tiny piece,” I declared, “just to see how it sits in my belly.” A few moments later, I was all Oliver Twist about it, holding up my plate for seconds.

From there, I began researching non-GMO, pasture-raised, grass-fed collagen powder to add to my morning hot drink or smoothie. I intuitively knew that this was going to be nourishment for my skin and bones. After a while, I noticed my skin was considerably smoother on the backs of my arms, and my sensitive belly was feeling pretty good. I think I even started to feel less anxious and calmer. 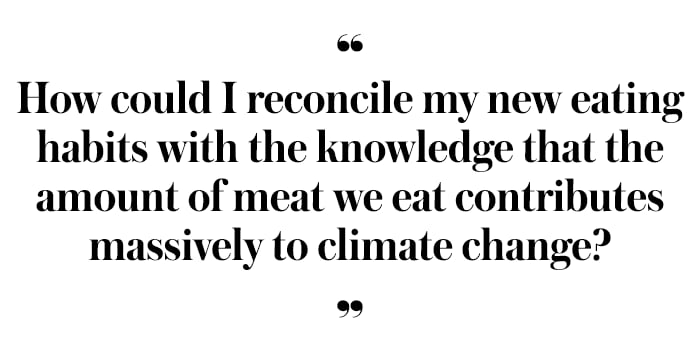 We began eating wild salmon about once a week, and as time was passing, I noticed that my body was responding well to animal protein. But what about my political point of view? How could I reconcile my new eating habits with the knowledge that the amount of meat we eat contributes massively to climate change? Or what about the fact that I love animals, and I abhor factory farming and the ill treatment of all living beings? I had some more thinking to do.

To be clear, most of my arguments for vegetarianism still hold true. And I will never point to my incisors and tell you they are meant for meat eating. (I will continue to argue that they are obviously designed that way to chew carrots.)

But sometime around this transformation, we bought a house in the country and started gardening. When you garden, you realize the symbiotic relationship between animals and the Earth. Cow and horse manure, eggshells and worm castings all play a part. To grow a healthy vegetable, you need the participation of some healthy farm animals. This understanding coupled with the knowledge that I was never going to become a hardcore, three-meat-meals-a-day consumer really helped soothe my troubled mind. 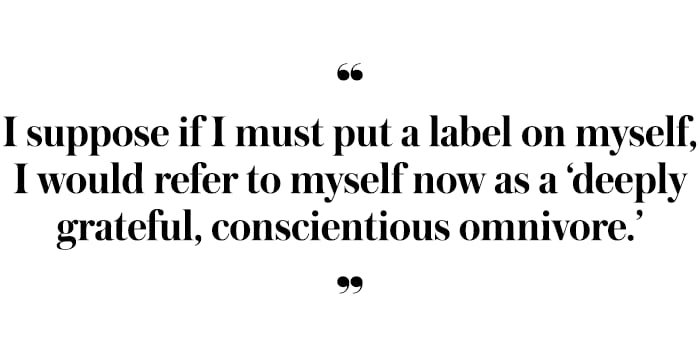 In most social circles, I will still be the vegetarian. I will probably never consume meat unless I know how it was raised. I want to eat only good-quality, grass-fed, pasture-raised, ethically treated meat — as a condiment more than the star attraction and only sometimes. I suppose if I must put a label on myself, I would refer to myself now as a “deeply grateful, conscientious omnivore.” It took a long time to get here, and this is all still a work in progress, but being open to change, I think, is a wonderful gift to self.

Have you started back on the meat after being vegan or vegetarian? Let us know why in the comments.