Between our abysmal maternal mortality rates and reproductive rights currently under threat, we are facing a critical moment for women’s health in the United States. Sen. Kirsten Gillibrand, D-NY, directly addressed these challenges — in addition to the need for paid family leave and equitable access to care for women of color — at the #BlogHer18 Creators Summit in New York City on Thursday, Aug. 9.

In conversation with maternal rights activist and model Christy Turlington Burns, Gillibrand did not hold back when it came to describing how various aspects of women’s health are at risk, especially as it pertains to President Donald Trump and his nomination of Judge Brett Kavanaugh to the U.S. Supreme Court.

“The reason why we should care is because [Kavanaugh] intends and will overturn Roe v. Wade,” she told the audience. 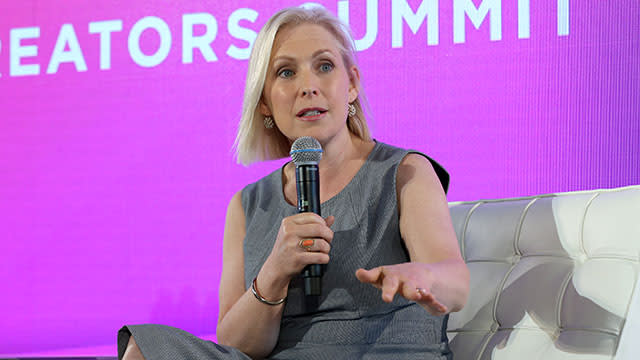 Gillibrand then pointed to Kavanaugh’s speeches and writings, where he has indicated that “he does not see where our basic human and civil rights exist in the U.S. constitution.”

“Without the protections of Roe, it means you’ll criminalize abortion and it means that you will force women to take a child to term, even if it costs her her life,” she added.

And it’s not just our abortion rights that should be a concern. According to Gillibrand, women of color in New York City are 12 times more likely to die in childbirth than white women, which she says is a direct result of the “impact of institutional racism.”

Gillibrand went on to discuss a bill she introduced in the U.S. Senate that would create standardized best practices for maternal health in hospitals across the country in addition to the money to fund this program. A component of this would involve having emergency kits on hand when someone gives birth so that if they go into cardiac arrest, for example, the equipment is right there in the room and the patient wouldn’t need to be transported to another part of the hospital, saving previous minutes that could mean life or death.

More: Why the U.S. Was Named the “Most Dangerous” Place to Give Birth in the Developed World

And her plea for accessible, effective medical care for women didn’t end there — Gillibrand also spoke to the importance of Planned Parenthood as a major health care provider for women in America.

“Planned Parenthood is necessary care. Planned Parenthood is basic health care for millions of women across the country, and without the protection of Roe, states are literally waiting to make abortion illegal,” she said. In fact, four states (Louisiana, Mississippi, North Dakota and South Dakota) have what are known as “trigger laws” that would automatically repeal abortion rights in those states if Roe v. Wade was overturned. 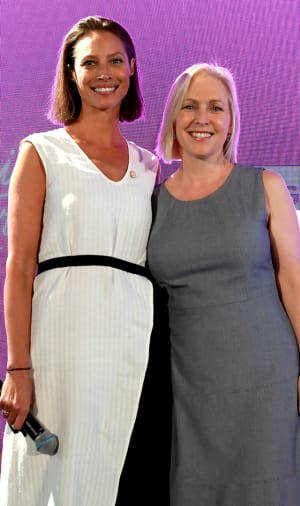 The current administration is not only committed to rolling back our right to safe, legal reproductive care, but also against providing paid family leave — another issue Gillibrand is passionate about. In fact, she told the #BlogHer18 audience about another bill she has written that would guarantee national paid leave for all workers, regardless of gender, company size and whether you work full-time, part-time or as a part of the gig economy. The idea is that you would buy into it as an earned benefit (the same way you buy into Social Security) at a cost of $2 per week, which would be matched by your employer.

“Over your lifetime, you’d have more than enough money to take the leave that you need for all life events, so whether it’s a new baby or a sick spouse or a dying parent or a sick child, having that flexibility when you need it would make all the difference,” she said.

Gillibrand explained that when someone has a family but doesn’t have paid family leave or time off they can take to care for that family, they frequently end up having to quit their jobs. This results in what she referred to as the “sticky floor”: the idea that once women leave the workforce to have a family and then attempt to reenter it, they do so at lower-level positions, which typically also come with a pay cut.

But while Gillibrand’s bills would make significant progress, it’s not enough that they exist — they also have to make it into law. In order for that to become a reality, she stressed the need for more women to run for political office. Fortunately, she said that we are in the midst of a “pink wave,” with more women running in the upcoming primaries than any other election in U.S. history.
In a particularly touching moment, a woman in the audience stood up and was moved to tears as she described the challenges of being a federal employee under the Trump administration. She received a standing ovation, thanked Gillibrand for her service and then asked her if she was going to run for president in 2020.

Gillibrand responded coyly, thanking the woman for her public service.