Between caring for her mother, who has brain cancer, and receiving a brain tumor diagnosis of her own, the past year hasn’t been easy for Maria Menounos. Yet despite facing one challenge after another, she said that getting sick was “the biggest gift” she’s ever gotten.

“I’m a completely different person, and [before getting diagnosed with the brain tumor,] I didn’t know it, but happiness existed,” she told the audience at the #BlogHer18 Creators Summit in New York City on Thursday.

Through her dual role as a patient and caregiver, Menounos said she’s learned countless hacks and strategies for dealing with a cancer diagnosis. “I don’t think there’s one person in this room who hasn’t dealt with cancer,” she said.

More: Maria Menounos Said She Wishes God Gave Her Cancer Instead of Her Mother

The former E! News host and current radio host said that when it came to navigating cancer treatment, she has access to resources and a platform most people don’t. So in order to help others, Menounos announced that she’s developing a show that will provide a “roadmap” for dealing with everything that comes your way, either as a cancer patient or caregiver — as well as general advice for health and well-being.

Menounos gave the #BlogHer18 audience a sneak peek of the tips she’ll share on her new show, including keeping a “pain journal” chronicling your symptoms so that when you go for your annual checkup, you’ll be able to give your doctor an accurate report of what you’ve been experiencing. 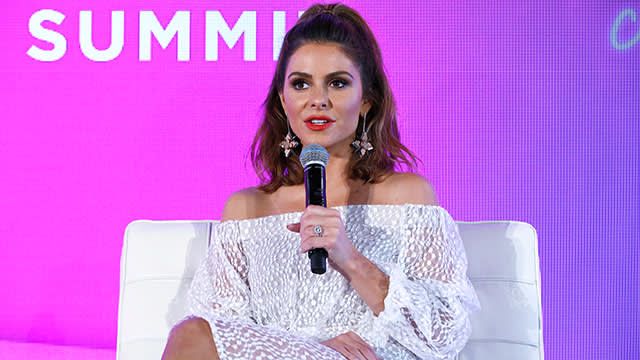 More: Maria Menounos Is Stepping Down at E! News as She Battles a Brain Tumor

She also recommends keeping a list of the things that are guaranteed to make you happy (her examples include hugging her dog or smelling flowers) and putting it somewhere visible and easily accessible (like on your refrigerator) so when you’re feeling down, you’ll instantly be reminded of happiness.

Following her time onstage, Menounos sat down with SheKnows for an exclusive interview in which she shared more about the health-focused show she hopes to make.

“I don’t know how much I can say because we just shot our sizzle reel and we’re hoping to take it out in the next two weeks and we’re hoping we can get it sold and get it on the air quickly, because people need it,” she told SheKnows. “To me, it’s showing people that 360 approach to health care and showing them things they didn’t consider before. Showing them by example how it can be done, how to divvy up responsibilities so you’re not the only one taking care and also to show how important it is to care for the caregiver. “

Menounos also cautioned against relying solely on statistics when making medical decisions for yourself or someone else.
“Remembering that those aren’t every case, they’re just statistics,” she told SheKnows. “What’s so important is listening to your gut and not allowing fear in, because you can’t make the decisions from fear. Nothing good comes from fear.”