Four years ago, I first noticed symptoms of endometriosis, a disease I didn’t even know existed at the time. I remember waking up late one morning and feeling as though I had pulled an all-nighter. I could feel contractions in all sorts of places I had never before been conscious of, and I couldn’t get myself out of bed.

During the following five days, I bled heavily and canceled plans with friends. The following month, the symptoms came back paired with sharp pain in my left hip — it felt like a trapped nerve or pain from exertion, but I hadn’t overexerted myself. I also felt like I had a recurring UTI or cystitis alongside food poisoning and new allergies, but tests showed that wasn’t the case. At the time, I didn’t see these as related symptoms. When I canceled on a friend for the gazillionth time, she told me, “That doesn’t sound normal.” It wasn’t.

When I first visited my regular physician with this severe cyclical pelvic pain and fatigue, I recall him telling me, “Period pain is normal. Have you tried ibuprofen?” I had, I told him, and it hadn’t helped at all. This was a different kind of pain — one that was difficult to forget about or subdue with over-the-counter drugs. “Many women,” he told me while staring not at me but his screen, “overestimate how much they bleed.” And for many months, that was that.

My symptoms began to creep into ovulation and soon became part of every day. I’d spend most of the month coiled up in pain with few moments of respite. I took all the drugs I could get my hands on in order to function. It took three years for me to get a diagnosis of endometriosis after countless invasive pelvic examinations, ultrasounds and two laparoscopic surgeries. After being dismissed for so long, I could hardly believe the biopsy results during the second procedure.

Looking at average diagnostic delays indicated by a study in a Scandinavian journal of obstetrics and gynecology, I was one of the more fortunate ones: I had a relatively short diagnostic delay. The study reported that, on average, it can take between six and seven years for a woman with pelvic pain to be diagnosed with endometriosis. An early diagnosis can reduce pain, emotional stress and professional setbacks, and it can improve your chances of conceiving. But what can you say to a physician to expedite a diagnosis?

Texas-based excision surgeon John Delumba frequently has patients with suspected endometriosis referred to him. He says the most common symptoms of endometriosis are heavy or irregular periods, lower back pain with periods, loose or painful bowel pain with periods, a family history of similar symptoms and painful intercourse. Patients also come to him with less common symptoms, including referred pain in their legs or thighs, seizures that coincide with menstruation and blood in their urine.

Endometriosis is an enigmatic disease, and its symptoms are not the same in every person. Here are just a few ideas of things to say to your physician that may help you get a faster referral to a specialist. 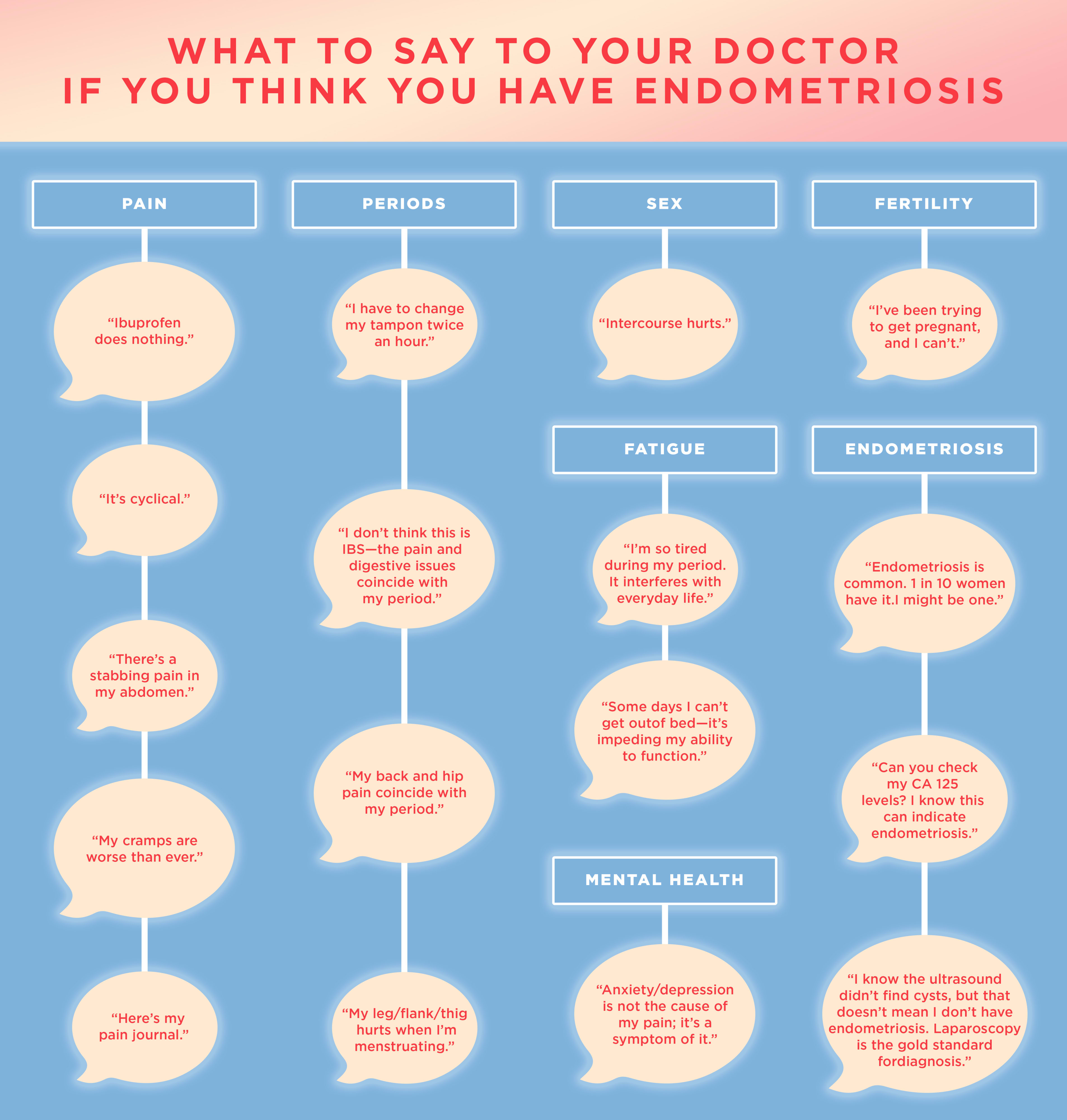