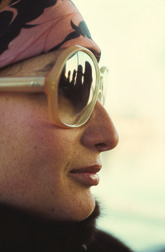 “You look Spanish,” said Serge, a tall Frenchman who looked about 40. The gray streaks in his hair gave him a distinguished air. But when he said he was a gynecologist, I wondered what we could possibly have in common.

I was 20, from a stultifying Westchester suburb, and this was my first European trip. Barbara, a Sarah Lawrence College senior, was my travel companion. We shared a passion for art.

Serge and I met at an elegant apartment — crystal chandeliers, oriental carpets, Louis XIV furniture and ancestor oil paintings — that belonged to Florence, my travel companion’s college friend. She had married a French doctor twice her age.

At dinner, Serge told me I reminded him of his cousin. I wanted to ask more about her, but I didn’t dare speak in my schoolgirl French. His English was perfect.

As the evening ended, Serge asked me to dinner the following night. I politely declined. Barbara and I walked home to our spartan hotel on the Rue Médecin. Our tiny room had a double bed with a hard, rounded pillow that ran across its length, an old washstand and a bidet where I washed my feet after wandering around the museums in sandals all day.

When I told Barbara about Serge’s dinner invitation, she couldn’t understand why I hadn’t accepted. “He’s so charming,” Barbara said.

“A colleague of Florence’s husband wouldn’t be so gauche,” she countered.

I didn’t give the matter much thought until the following morning when I couldn’t find the tampon I had inserted the night before. The string had disappeared, and I feared I might get an infection.

Barbara called Florence, who gave her Serge’s number. I called his office and explained my embarrassing situation to his nurse. Serge came on the line and said he would visit our hotel that evening at 7 p.m. I agreed, but made Barbara promise not to leave me alone.

Serge arrived and announced that he was taking me to dinner. He had scheduled my visit to his office the following morning at 9. Barbara looked at me to see if it was OK. I nodded.

We dined at a nearby bistro eating escargots and stuffed veal. Instead of mentioning my pelvic health issue, he asked about my life. I told him I was still in love with my former fiancée who was studying German in Munich for his Columbia Ph.D.

“So that’s why you’re here,” he said. “I thought it was for European art.”

I blushed, wondering if the embedded tampon had traveled up my uterus and gotten stuck in one of the fallopian tubes.

“Well,” he said, “if that doesn’t work out, please call me when you return.”

More: Reminder: Vagina Is Not a Dirty Word

As we finished a bottle of wine, I listened while Serge told me how he doted on his two young daughters who he shared with his ex-wife.

After dinner, he insisted on driving me to the Place des Vosges. When we stood there in the moonlight, I marveled at this ancient square’s perfection. But as Serge pointed to the 17th-century king’s quarters and showed me how far they were from his queen’s, I knew sex was on his mind. Luckily, he couldn’t have me if he wanted. I was already occupied down there.

After we left the square, he took my hand and held it until we found his car.

When he dropped me off he kissed both cheeks. “See you tomorrow.”

As I entered our hotel room, Barbara was reading in bed. “What happened?” she asked.

“We shared stories about our lives,” I offered.

“Sounds inviting,” she said. “No mention of the tampon?”

“You heard him say tomorrow morning,” I reminded her.

The following morning in his brightly lit surgery, Serge, wearing a white coat over his suit, removed the offending tampon in a few seconds. I was relieved that his mature nurse was in attendance. She patted me on the hand after Serge left the surgery and led me to a changing room. I met Serge in his office. He shook my hand, refused to accept any money and wished me good luck on my journey.

The crisis over, I boarded the train to Munich the next day.

Although my ex-fiancée and I spent the mornings in bed, he made sure to leave on time for his afternoon classes. So I roamed the Alte Pinakothek contemplating Da Vinci and Botticelli. As we dined in beerhouses at the English Garden, he discussed his English translation of the Brothers Grimm instead of our future. I found myself daydreaming about Serge. He had become my Prince Charming. Was losing the tampon and needing him to save me my subconscious at work?

More: Yes, Your Partner Can Go Down On You During Your Period — & It Can Help With Cramps

A week later when I returned to Paris, I called Serge. As we sat drinking tea at Le Mariage Frères — he had canceled a few patients to see me — I felt sophisticated and European as we talked about the great art I had seen. He reached for my hand across the table and a sunbeam bounced off the waiters’ white coat to the white porcelain teapots on the tables.

As we left the restaurant, he kissed me on the lips for a long time, and I imagined us making love. But it was too soon after Munich, so I told Serge the truth. “Please bear with me,” I pleaded.

“You’re a woman of delightful excuses,” he teased.

After I returned to the States, Serge and I wrote long letters. I told him about my editorial job. He told me about his eldest daughter’s ballet recital. Serge finally came to New York for a medical conference the following June. We kissed all the way in the taxi to Le Cirque. As we sat side by side, my attraction was palpable, but I confessed that I’d met someone else.

“Again?” he asked. This time he was annoyed.

“I don’t want to leave my family,” I said, thinking of how Florence had moved to Paris for her French doctor.

Serge cleared his throat and patted my hand. I realized he wanted romance, and I had jumped to conclusions about lovemaking leading to marriage. Our age difference did matter after all.

My lesson learned, I made sure whenever I traveled to always research local medical facilities in advance. And I stopped depending on men to save me.