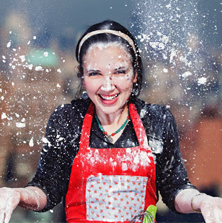 I remember clearly the first time I experienced true withdrawal. Cheering my brother on in a triathlon in Washington, DC on a particularly bright and hot summer day, I was soon a pool of sweat. My jaw wouldn’t stop grinding my teeth from side to side. My bones felt like they were on fire, screaming to be shattered by a hammer into a hundred pieces, or at the very least, for my joints to be popped out of their sockets. My head was a drum. I writhed for the five-hour drive home.

I was physically addicted to an opioid painkiller, Fentanyl, which is 50 times more potent than pharmaceutical-grade heroin. Since I received the drug through a patch on my skin, the heat that day had increased my circulation and pulled more of it into my system.

Once it ran out, my body fumed violently. I had been warned this could happen, and now I was feeling its truth.

Fentanyl is a synthetic opioid used for treating breakthrough pain. Since it is 80-100 times stronger than morphine, it’s often used intravenously or orally in conjunction with other drugs during endoscopies or surgeries.

More: Floating in a sensory deprivation tank is way better than yoga

For those who cannot take medication orally, the transdermal patch is a godsend when taken for short periods of time. It was truly a godsend for me, but I was on it for ten months straight.

I’ve battled severe chronic pain issues off and on for much of my adult life, a result of contracting Lyme disease in childhood during a time when the science wasn’t current enough to cure me completely.

I’d been working with a pain management specialist for many years before an intense period of illness had me out of work and in so much pain that I could barely move if not treated with something. I’d dropped twenty-five pounds from not being able to digest anything, losing the strength my body desperately needed to heal itself.

The pain medication I was taking orally helped, but made my insides twist. I’d break out in fever, trying to pass anything through. That’s how I found myself on Fentanyl – my digestive tract was non-existent and I needed help.

More: How I’ve learned to cope with the worst parts of my endometriosis

It made it possible for me to take the subway to my doctors appointments, to eat a Japanese yam once a day. I could finally drive my friends around our old college town, me napping in the car while they ate and got boozy. I could go to Radio City with my boyfriend, or to a cousin’s birthday, or simply to lay on a couch without wanting to float away into the abyss.

Ten months later, my body was further down the road to health, and it was time to take the patches off. For three days, I lived in darkness. My body was screaming for the medication, pounding me with more pain than I had known possible. Every bone felt like it needed to be shattered now into tens of thousands of pieces. I’d sit on the floor and try to meditate, sobbing within seconds instead.

I cried in the bathtub, the heat and Epsom salts working to no avail. Light made everything hurt. I couldn’t focus on television or talk to anyone. My sweet boyfriend looked in on me from time to time, but there was nothing he could do. I sweated into my sheets at night. I’d stare at the clock, waiting for the exact moment when I could take the next Percocet. Titrating me down from the Fentanyl to nothing meant I’d transferred to eight Percocet a day and would eventually make it down to none. They weren’t enough.

I almost gave in and slapped the final patch I had in my medicine bag right back on. Getting past those first three days took more strength and determination than I honestly knew I had. I remember thinking at the time, “I now understand why heroin addicts can’t kick the habit.”

More: My hypochondria, OCD, and PTSD create a vicious cycle of mental illness I can’t escape

My heart opened in sympathy to them, because the amount of torture I experienced was at least eased by being able to jump to a far lower dosage rather than being cut off completely. Another week went by, and my body did start to breathe again. I still had to take those eight Percocet, but they were enough. Then seven were. Then six. I was fortunate to be working with a naturopathic doctor at the time who supplemented the drug with plant-based medicines that shortened the expected titration period of three months down to six weeks. I slowly gained weight back and started to heal.

I’ve known people who have died from heroin overdose, and a dear friend of mine (also chronically ill) has been in and out of rehabilitation programs for medications that help ease her pain. She’s clean now, but lives in an amount of pain daily that I wouldn’t wish on my greatest enemy because her body gets addicted in ways that mine doesn’t.

Addiction is a real, valid concern, but the harsh reality is that some people live with breakthrough pain that can’t be fixed by anything else, and their limited quality of life is that much more the better from the relief of opioids.

I live a very healthful life. One of discipline, healing foods, low stress, gratitude, thanks and love. It’s also one of frustration, pain, and patience. Those who know me well see how maintaining the health I have is always a concern, always a focus.

If I could have thought or worked or prayed or dieted or meditated or exercised my way back to full health, I would have by now. But disease is real — we don’t choose it and we can’t will it away. I’m thankful for my vitamins, supplements, acupuncture and naturopathic physicians. I’m also thankful for my incredible pain management doctor, who helps my healing process just by saying, “You don’t deserve to live in so much pain, and you don’t need to.”

I can say with 99 percent confidence that I will never go on the Fentanyl patch again. Coming off of it was a kind of pain I don’t think I could handle living a second time. But I am thankful that it helped me live my life a little easier while I was on it. Because, thanks to it and the doctors and other protocols that helped me get through another severely sick period, at least I could still muster a smile.

Jacqueline Raposo writes about people who make food for a living, gathered at www.wordsfoodart.com. Recently, she’s written about the correlation between chronic illness and relationships for Cosmopolitan and about chronic illness and not having children for Elle. She writes healing, gluten-free recipes at www.TheDustyBaker.com and can be found on Twitter, Facebook and Instagram.