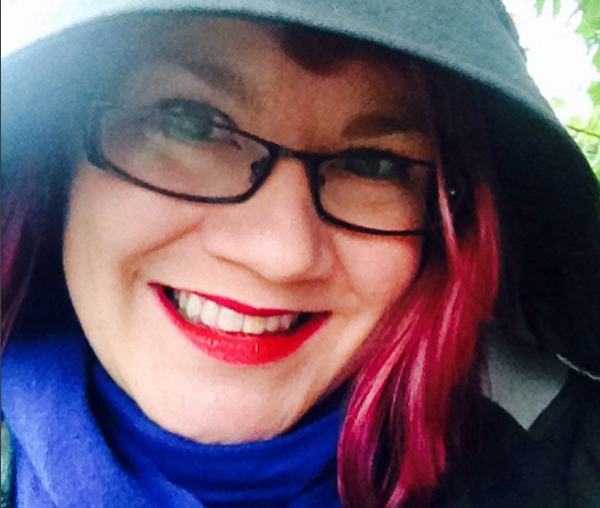 What’s the longest you’ve ever been alone? Last fall, I was diagnosed with an illness that had progressed to the point of absolute debilitation, and I’ve been homebound for the last 10 months. As a result, the longest I’ve been totally alone is around five weeks straight, with about seven brief interruptions by grocery delivery drivers — who’d wind up inching back from me as I babbled away about anything, anything at all.

I’m recovering from severe B12 deficiency, which destroys the protective myelin sheath around my nerves, brain, and spinal cord. This process causes damage all over the body, but the most pertinent symptom here is trouble walking. On bad-ish days, I walk like a pregnant robot, my movements stiff and my legs bowed out.

I live alone at the bottom of a condo complex that slopes down into a gorgeous tree-covered canyon. Peaceful? Oh my goodness, so yes. But also completely inescapable since I can’t drive. The renowned transit was a big reason I moved to Portland, but my bus stop lies at the top of that big ole hill. It might as well be Everest.

More: How a vitamin deficiency nearly paralyzed me

My close local friends are mighty in quality, but very few in quantity — and they have busy lives of their own. I was also in so much pain this winter that I usually didn’t want to see anyone. It just hurt too bad, and I just didn’t have the energy.

It was really difficult. There’s no need to tiptoe around that. Some days I felt abandoned, and rational or not, it felt like I had no one at all — like I had disappeared and the world was just fine and dandy without me. (I’ve definitely decided to put down some real roots when I get out of here.) It was one of the darkest times of my life, and on some days, I honestly didn’t know if I’d get out the other side.

But as I get further away from the dark times, it’s becoming clear that this experience has actually been wildly beneficial. Facing darkness brings truth, and has helped me to see more clearly. I was able to really think about what I want from life and relationships. I made some really solid goals, and I was able to gain a healthier perspective on my past. (Plus, I finally got to grow my eyebrows out to find my “natural arch” sans anyone seeing the furry stage, huzzah.)

Another fun result of all this alone time is a definite increase in silliness. I’m singing at the top of my lungs, I’m talking to myself, giving self-fives (which I realize I stole from Liz Lemon), I’m writing without censor, I’m tanning in my underwear — I’ve actually had some really good days!

But the biggest aspect of it all has been reflection. I’m a spiritual person, a meditator, a writer. I like to reflect. You could even call it a hobby, but this was fucking intense. During the worst times, I was lucky to sit upright for an hour. Sound often irritated me intensely, and I was in too much pain and too weak to even hold up a book. Very literally all I could do was think. (And I took up bird-watching. I’m going to keep it.)

At some point in all the reflection, I realized that I’ve often bounced off of everyone in my life instead of moving from my own center. Other people’s reactions, and more specifically, my fear of them, had taken over my interactions, creating a distance between me and everyone in my life. I saw how this affected my relationships, and I wondered if others struggled with their own version of a similar problem. I mused on the façades we all wear.

More: Everything we’ve been told about flossing is a lie

Then I wrote a book about it. And I even found an agent, a good one. We’ll see what happens with it all, but I’ve never felt closer to having a work life that satisfies me. My relationships have become much more authentic (for better or worse), and I feel more connected to myself than I ever have.

I don’t recommend that anyone spend 10 months alone in their apartment by choice. It’s not as spectacular as that — but it’s really made me see the value in developing comfort with being alone. I feel like I’m gonna be a force when I finally bust out of here, and it’s exciting indeed.