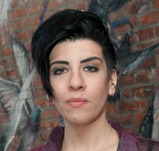 The last time I ate meat I was an intense and sturdy theater student who wore all black and smoked clove cigarettes without inhaling (but, like most other things I did in the 1990s, it was simply for show). I perched like a plump pigeon on the steps of my performing arts college in Philadelphia and took a substantial bite of my beloved go-to cheesesteak, the greasy innards sliding down my gullet for the final time.

Until that point, eating animals was as comfortable as my oversized Champion sweatshirt — it was simply something I did. But, much to my annoyance, my new friend Emily’s long-standing vegetarianism was seeping into my psyche, and eventually, I was forced me to see what most of the world so easily ignores: The bulk of my meals had once been individual lives.

I simply could no longer ignore the fact that, much like me — a chubby kid who had been bullied her entire life — animals were misunderstood, misused and misappropriated. From then on, at social gatherings and restaurants, I would add just a hint of a fake British sophistication to my New Jersey accent and theatrically proclaim, “I’m a vegetarian, but not the mean kind.” Six years later, I became what I had deemed the “mean kind” when, after learning about the horrors inherent in the egg and dairy industries, I went vegan and stopped eating animal products altogether, trading in my cheese omelets for fried tofu and my tubs of ice cream and extra-cheese pizzas for their plant-based cousins.

I proceeded to defy all stereotypes that vegans were waifish food-loathers who lived on nothing but steamed greens and arrogance. Despite my secret wish for veganism to rid me of the excess weight that clung to my body like a needy lover, that didn’t happen. Instead, when I went vegan, I got even fatter.

At 30, my doctor laid it out in unmistakable terms. “You are on your way to heart disease,” he reported, glancing at my test results that displayed some shockingly high triglyceride levels. Prior to that visit, I had simply ignored my lingering back and shoulder pain, debilitating headaches, adult-onset acne, and the underlying depression that constantly made my life dimmer. But heart disease? Maybe it was time to change my story. Up until then, when it came to food, protecting animals had always been my one and only bottom line. Self-care was for people with more time, patience and discipline than I would ever have. Or so I rashly told myself.

It took that weighty encounter with my doctor for me to realize that committing to a life of fighting for animals meant very little if I wasn’t also advocating for myself. Although I had struggled with weight my whole life — often in the slender shadow of my stunningly gorgeous mother who didn’t realize she was thin or beautiful — I began to recognize that I’d had it wrong all along. It wasn’t my weight that had been the issue. It was my senseless devotion to the wrong kind of love.

More: Finally! Some sleep advice we can get on board with

As a kid, food was not only my greatest ally, my constant companion and my unwavering best friend, but it also was my soul mate. I turned to it on days and nights when I felt broken from bullies — the ones who insisted I was nothing, the ones who I foolishly believed were everything. At 19, when I was date raped by a 35-year-old man who had drawn me in by telling me my curves were succulent and my flesh luscious, it was an entire extra-large pizza that halted my hurting. At 27, when a short-lived romance with a brilliant but bitter woman shattered my heart into a million mini M&M-sized pieces, I discovered vegan bologna, and things started looking up.

In the days after my doctor fed me my fate, something began to shift. I realized with newfound clarity that my weight was not the problem. The real problem, it seemed, was something much bigger than that — much bigger, even, than me.

Throughout the next two years, I went on to lose nearly 100 pounds. I began an intense regimen of regular juice fasting interspersed with periods of eating unprocessed, whole foods: vegetables, fruits, legumes, whole grains and high-quality fats, with only the occasional cupcake (vegan, naturally). I continued to uncover the truth behind the foods I ate and slowly started to uncover my very own truths, too. As my relationship to my body changed, and as the world changed in its reaction to me (a bittersweet ordeal that admittedly left me somewhat jaded), I saw no choice but to face my reflection in full.

I came to realize that the shame I felt back then was, by and large, unrelated to my size. In fact, with the exception of those who suffer from health ailments, as I had, fatness certainly does not need to be a determining factor in happiness or health. In my experience of wearing every dress size from 18 to 4, it dawned on me that what had long weighed me down was not actually my flesh but my desperate, obsessive, needy relationship with what I ate.

Becoming a vegetarian had been my first step in letting go of the hold that food had on me. Yet when I went vegetarian, I wound up simply replacing meat with faux meat. I still adamantly refused to eat my veggies, fruits and all the other life-sustaining grub on the menu. I still vehemently refused to examine the reasons I was compelled to eat voraciously and maniacally in the first place. Ironically, when I went vegan and transitioned animal products out of my diet altogether, I felt an immense power in voting for animals with my dollars. But I still felt totally powerless over my compulsions.

Although it was surely a roundabout journey, ditching animal products was the single best decision I have ever made — and not only because it started me on that road to letting go of the toxic parts of my relationship with food. Even though I have since gone on to reclaim my health through whole plant-based foods, I was and remain vegan for the animals. Going vegan was the first, and probably the boldest, move in my quest to shed the lies I had been telling myself ever since I was old enough to pick up a fork and scream, “MORE!” Lies, it turns out, taste really good when they are deep-fried, but, eventually, they can clog your arteries and sicken your heart.

Jasmin is a speaker at the #BlogHer16 conference, the premier event for women online taking place from August 4-6, 2016, in Los Angeles, CA. Don’t wait! See the agenda and all the speakers and get your ticket now.

15 hrs ago
by Dr. Lexx Brown-James