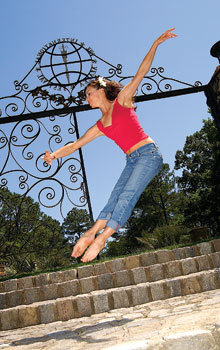 A few years ago, at the age of 35, I started a graduate program in horticulture. I had finished my first career as a professional ballerina and had been pursuing horizons in the world of plants. I was unattached, career focused and ready to change the world one garden at a time. One of our first assignments as grad students was planning and making a trip to Brazil, namely the Amazonian rainforest. We embarked from Manaus on a boat with about 30 people and made our way down the Rio Negro on a four-day cruise to explore the flora and the fauna of the region. Six of us from the graduate program were traveling together.

More: 5 relationship habits of the happiest couples on the planet

The first day we befriended a sweet German guy who was traveling alone. When we got a chance to speak, he talked about his career as a financial planner and what he liked about it. He was so genuine, passionate and clear. I found everything he said refreshing, different from what I was used to hearing from men my age. I tried not to think about him in a romantic way because he was from Germany — I was from America, and this was a work trip.

Four days later, we were disembarking and exchanging email addresses. After we all said goodbye, I felt a pang in my heart, suddenly saddened at the idea that maybe we would never meet again.

As luck would have it, we did see each other again — at the airport! That’s when my colleagues started forecasting our eventual marriage. I was in total denial. A few days later, our whole group met for a dinner in Rio de Janeiro. We were never alone, but he and I got a chance to talk again. He told me his decision to travel was fueled by his interest in getting to know and understand all different kinds of people. I was stunned. It was like he took the words right out of my mouth.

I was inspired, too, because at that time I only spoke English. He already spoke German, English and some Portuguese. He was really making good on his commitment to learn more languages.

We parted ways after Rio, but neither of us wasted much time. We sent messages expressing our sincere interest in trying to meet again. We kept in touch through iMessage and Facebook Messenger throughout the rest of our respective trips, and once he was back in Germany and I in the States, we had our first Skype date. I even used to brush my teeth and put on lipstick before our Skypes, like it was a real date.

Luckily, I was in graduate school so I had pretty flexible hours. The time difference between the East Coast and Germany is six hours. Often I was able to come home for a late lunch break around 3 or 4 to Skype and then go back to my office to work in the evening. He would get up early, work all day and Skype with me from 10 to midnight!

I was careful in the beginning because I wanted to be sure everything was genuine. I didn’t want to just get caught up in the excitement of it all, but our conversations only got more interesting.

I also made my real life a priority. I didn’t want to miss out on living while I fostered a long-distance relationship. So we both made efforts to become engaged in each other’s existences, talking about our work, our friends and family and sending lots of photos. He was better than I was at this in the beginning, always including me in everything.

After saying goodbye nine weeks earlier, we met at the airport in Philadelphia and shared our first kiss. We had a reunion with all the Brazil colleagues, and I showed him some of my favorite spots on the East Coast. A few months later, I visited Germany. That summer he came to meet my family. We were able to fly back and forth a few more times, and the following Christmas we got engaged.

More: 12 Things successful couples do to make their relationships last

We talked very early on about whether or not living in Germany was an option. I knew it would be hard, but I knew it was a great opportunity to make good on that conversation we’d had in Rio about learning more languages and understanding more people. We had our wedding in the States, and a few weeks later we started our life in Germany.

I spent the first six months in language school — four hours a day, five days a week. I was in a class with people from 20 countries. It was fascinating and hard but very rewarding. The variety of languages and learning styles no doubt made it difficult for the instructor, but we did it.

To be honest, taking time away from my career to focus on immigrating and building a life with someone else has been challenging, but I have never wanted to quit or regretted the decision. Missing the company and support of friends and family has been tough but has made me appreciate my new friendships even more. There are certainly more challenges to come. Forming a life together is different from talking about our dreams on Skype. It has shown me that everything has its own time. I had been told lots of times that there is someone for everyone, but I really didn’t think so. By the time I was 36, I was happy being independent.

Our first evening on the Amazon, we stood on the roof of the boat and stared in awe at a sky full of more stars than I could have ever imagined existed. Really, I grew up in cities. I knew about the Big Dipper and the Little Dipper and the North Star and that was about it. The first miracle was realizing there really are countless stars — the universe really is infinite. Then a few stars fell. As unbelievable as it is, we both saw falling stars that night. From that moment on, conversation after conversation, circumstance after circumstance, we only found more things in common and more understanding.

That trip to Brazil changed my whole life. Don’t get me wrong, my life was already great, but an entirely new path was forged as a result. I always believed in taking chances, in living outside my comfort zone. I just didn’t believe there could be a partner so suited so me. I didn’t believe in soul mates or falling stars or that anything was really meant to be. Now I have an inkling that some of those mystical ideas are real. What I see now is that the universe offers us magnificent opportunities. We have to recognize them and then do what it takes to see them come to fruition. Maybe, just maybe, some things are meant to be.