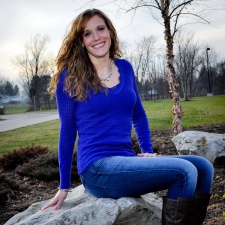 I’ve learned that when we challenge ourselves and set goals that seem nearly impossible, we can accomplish incredible things.

When I envisioned my plans for the future in my 20s, I never imagined I could be accomplishing the most difficult athletic feats of my life as a 35-year-old mother of four. Even as recently as two years ago, qualifying for the Boston Marathon seemed like a nearly impossible task.

In 2015 I ran my first 24-hour race, qualified for the Boston Marathon for the first time, ran three marathons in the span of 13 days and have completed a combined 11 marathons and ultra marathons. I love the quote by Nelson Mandela, “It always seems impossible until it’s done.” I have used this quote as motivation to get me through some of the most difficult points in my running.

Over the past two years, I have learned that I am capable of so much more than I ever thought possible. In my 20s, I doubted whether or not I could complete one marathon. I just completed my 25th marathon in November. I have learned that my body responds better to running frequent marathons than it does to running just one or two a year. When I was running one or two marathons a year, I was constantly dealing with injuries. Now that I am running them more frequently, my body has adapted to the stress, and I have been injury free for over two years.

I have also been able to improve my pace across every distance. I ran my first marathon in 2008 in 5:18. When I qualified for the Boston Marathon in September, I ran it in 3:34. I never thought I would be able to maintain an 8:11 pace for an entire marathon; and yet, when I finished, I felt like I still had plenty of energy and could have run faster.

I’ve learned that by setting goals that seem nearly impossible, we give ourselves a chance to prove what we are truly capable of. The possibility of failure can be a great motivator to work hard. I know that if I don’t put in the work, I am going to fall flat on my face. Sure, I could choose a goal that is safe and easily accomplished, but it wouldn’t really test my limits. Many parents tell their children that they can accomplish anything they put their minds to; I want to teach this principle by living it.

A few years ago, I would have doubted that I could have accomplished any of the goals I have reached in 2015. Now, I’m setting even bigger goals for 2016, and I can’t wait to tackle them. I’m training to break 3:30 in the marathon, and to complete my first 100 miler in 2016. Like my 2015 goals, there is a chance that I may fail. But there is also a chance that if I put in the work, I will succeed in accomplishing what I once thought was impossible once again.

I believe that each of us has a unique passion, and that when we challenge ourselves to pursue difficult things it causes us to grow. My passion is running, but the same principle applies in nearly every area of life. When we take on the impossible, we frequently surprise ourselves by what we are able to accomplish. May 2016 be the year of accomplishing the impossible.