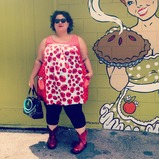 When I was 13 or 14 years old, I lived abroad, and magazines from back home served as a touchstone of all the U.S. culture I was missing. I read all sorts of things, including the Cosmopolitan magazines that the ladies in the expat groups collected and passed around.

Cosmo has always been controversial, so there was totally a thrill to reading it, even though, especially at that age, I was more likely to side-eye the “how to please your boyfriend” stories and advice than take any of it seriously. The quizzes were great, though, and my friends and I took them over and over just to get the results we wanted.

The claim is that Cosmo is as pornographic as Playboy.

More: Confessions of a swinger that will change how you see the lifestyle

One of the primary objections seems to be that Cosmo fancies itself kind of a how-to guide for women and sex. And while we all might have laughed at that Cosmo “eat a doughnut off his penis” tip, turns out that was apparently pretty fun.

I can’t help but look at the Cosmo Harms Minors website and remember myself as a young teen, reading Cosmo and giggling over how ridiculous sex seemed. But I also internalized the idea that women had a lot of control during sex because they were equal participants in it. They got to suggest silly things and be demanding about their own sexual pleasure.

And I’m not going to lie: Cosmo made oral sex — both giving and receiving — sound pretty great. (I’ve not been disappointed in it as an adult.)

More: How do we handle our issues around intimacy?

This campaign is run by Victoria Hearst, a born-again Christian (and the granddaughter of newspaper icon William Randolph Hearst, who founded Cosmo‘s publishing company — irony).

There’s a really strong conservative vibe of “but what about the children?” in the protest’s rhetoric.

I’m all for taking care of kids. And part of that, I think, is remembering that teens are interested in sex. And if Cosmo is really where they’re looking for advice, then there’s probably a greater issue at hand.

16 hrs ago
by Laura Williams