There are always a few awkward moments in the lead-up to having sex, even if you’ve been with the person forever. If you use condoms as protection, then most of them likely revolve around the “application” moment.

While most condoms are designed in the “easy-on,” roll-down style, people still tend to have trouble getting them situated in the proper place and keeping them there. But what if there was a condom that goes on as easily as perfume and was guaranteed to stay in place as long as you use it? That condom may soon become a reality in the form of a spray can.

More: New glow condoms will light up at the sign of an STD

Sound weird and a bit like something Flint Lockwood from Cloudy with a Chance of Meatballs might invent? Well, it is, but it also might work surprisingly well and help us all avoid those long, dreadful pauses between foreplay and intercourse.

The whole thing started as a school project at Pratt’s Munson-Williams-Proctor Arts Institute in Utica, New York. Michele Chu, the brilliant mind behind it, saw it as a chance to change the act of condom application by making it a more fun and interactive experience. She told PSFK’s design blog, “I thought the condom market needed some refreshing. Condoms look like those little ramen seasoning packets. They’ve just been these square things forever.” Seriously, condoms. You’ve been square (pun intended) for way too long. It’s time to mix it up.

The idea remains just that for the time being, but Chu plans to actually develop the company Girlplay (which she used to market the product in her class) once she graduates. “Girlplay is a condom company mainly aimed at bold and daring women, changing the whole experience of love-making,” Chu wrote in her pitch. She even came up with a “lover’s kit,” complete with a bra that can be unhooked via remote control and spray condoms that change flavors via the same remote. 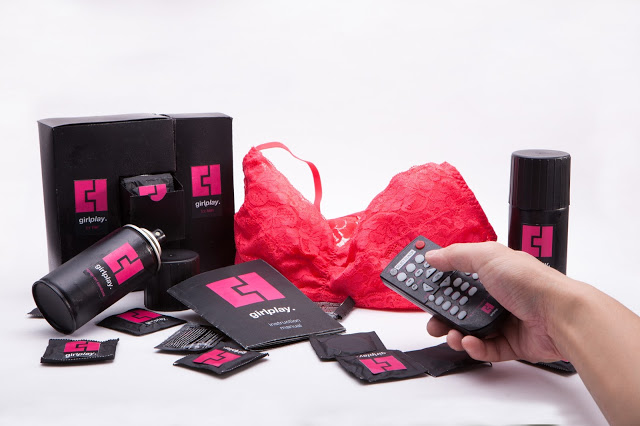 Hopefully when it comes down to actually building a spray-on condom prototype, Chu will be more successful than previous spray-on condom attempts. There was one created back in 2006 by German entrepreneur Jan Vinzenz Krause which never made it into stores because he couldn’t get the latex to dry quickly enough. Let’s face it — if we’re not keen on waiting the 30 seconds it takes to put on a traditional condom, there’s no way we’re waiting all of three minutes.

The safety factor is also a big issue with the spray-on condom idea. Since there hasn’t really been a successful prototype yet, it’s hard to say how effective (and convenient) they’ll actually be in use. Since Chu says the condoms are meant to work like those spray-on bandages, it may take some major rubbing and cleaning to get them to come off once they’ve served their purpose. That definitely doesn’t sound fun.

All in all, it’s a good idea in concept, but there’s a lot that can happen between pitch and product.

More: If your boyfriend’s condom won’t stay put, this is probably why

Learning to Read Tarot Totally Transformed How I Approach Self-Care