There’s not a person out there who can’t drop and give ’em 20, just like the guys — you simply have to know how to work your way up to it. The best news? You can master your push-ups with the following progression, and none of it takes place on your knees. 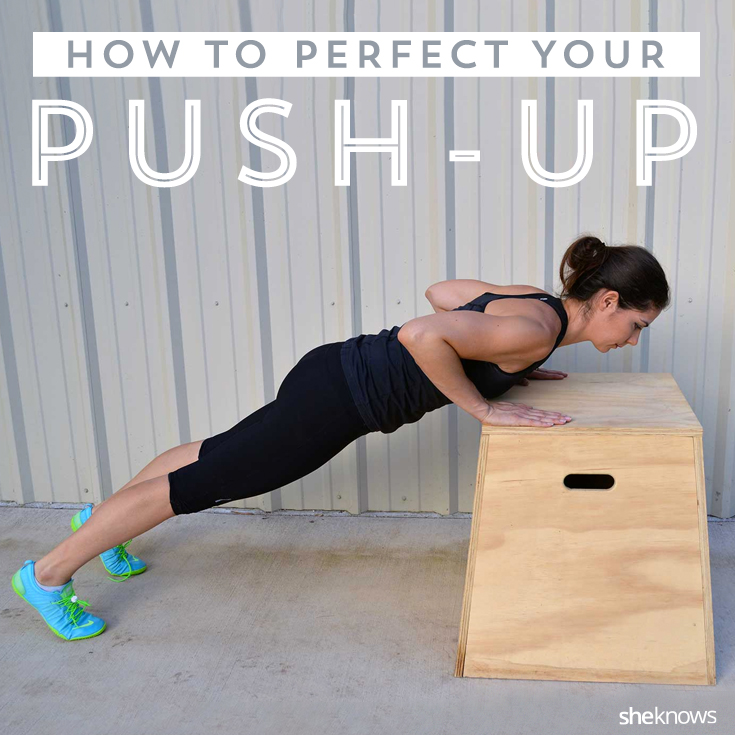 Note: All proper forms are demonstrated below!

Week 1: Perform three sets of 10-12 wall push-ups, allowing one minute of recovery between sets. Do this on three nonconsecutive days (for instance, Monday, Wednesday, Friday).

Week 2: Perform three sets of 10-12 incline push-ups, using a bench or step that’s at least 24-inches off the ground. Allow one minute of recovery between sets. Do this on three nonconsecutive days.

Week 3: Perform two sets of 8-10 incline push-ups using a bench or step that’s between 12 and 24 inches off the ground. Allow one minute of recovery between sets. Then, perform as many negative push-ups as you can, lowering yourself as slowly as you can on each push-up. Do this on three nonconsecutive days.

Week 5: Perform two sets of 8-10 lower-and-hold push-ups, holding each push-up in the lowest position for three to five seconds. Rest two minutes between sets, then rest three minutes before performing one set of positive push-ups, doing as many as you can while maintaining a tight core and good form. Do this on three nonconsecutive days.

Week 6: Perform two sets of 6-10 positive push-ups, focusing on form as you press yourself up. Allow two minutes of rest between sets. Finish with one set of full push-ups, doing as many as you can (even if it’s just one!), focusing on good form through the downward and upward phases. Do this on three nonconsecutive days.

Week 7 and 8: By now you should be able to do at least one set of “guy” push-ups, even if you can only do four or five at a time. Over the next two weeks, challenge yourself to do three sets, with one minute of rest between sets. Set out to simply do as many as you can with good form for each set. 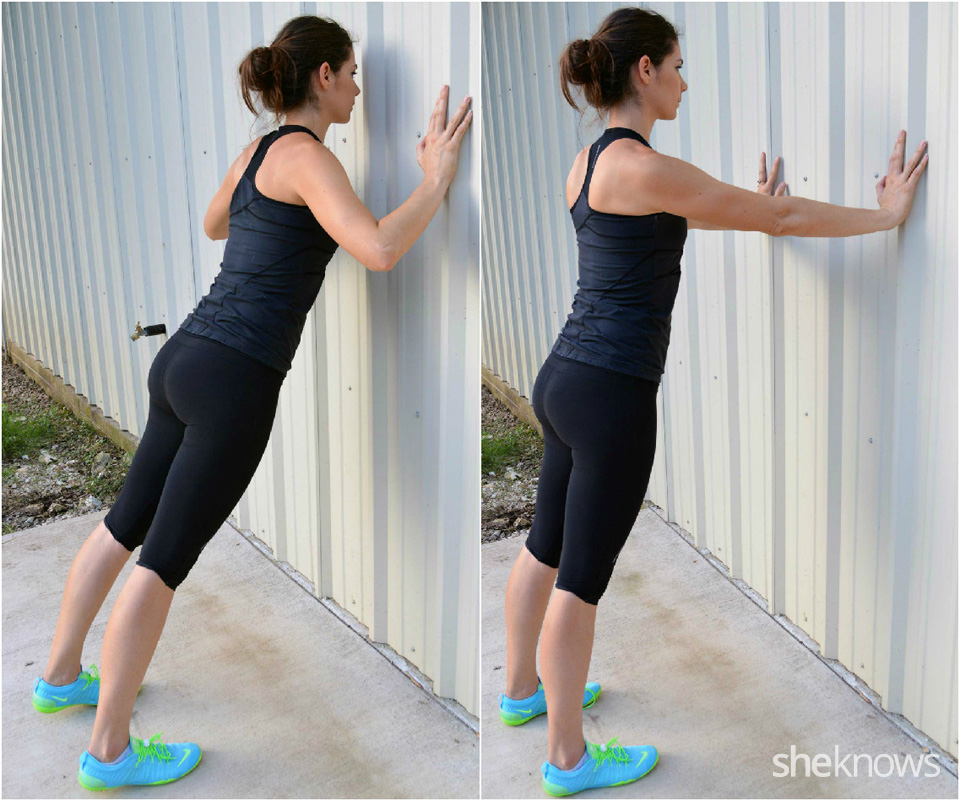 Stand a few feet away from the wall and place your hands flat on the wall directly in front of your chest, roughly shoulder-width apart. Lean forward and tighten your core, keeping your body straight from head to heel. Bend your elbows and lower your chest toward the wall, reversing the motion when your elbows bend slightly more than 90 degrees.

The incline push-up is performed just like the wall push-up, but this time you’re placing your hands on a sturdy, raised surface, such as a bench or the back of a couch. As you get stronger, you can choose a platform that’s closer to the ground. The goal is to keep your body as tight and straight as possible as you do the exercise — preventing your butt from sagging or tilting up toward the ceiling. Your chest doesn’t need to touch the platform you’re using, but it should come within an inch or two of touching down. 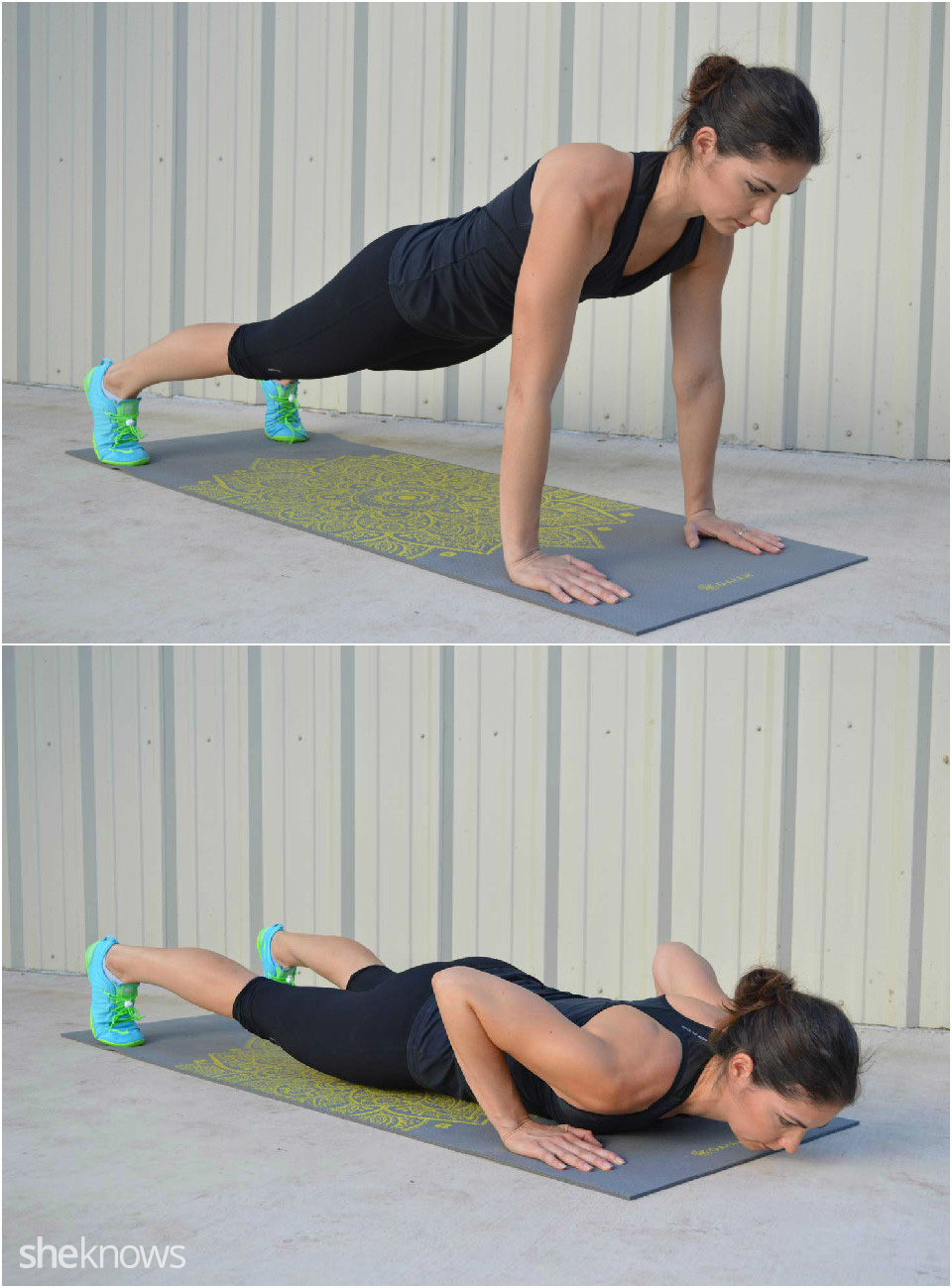 When you think about push-ups, you probably think the “up” part of the push-up is the hardest part, right? And while that is the part where you apply force to press yourself back to start, the downward — or negative — phase of the push-up is actually the part that causes greater muscle damage (which in this context is a good thing) and builds strength.

This is because the downward phase requires more muscle control — your muscles have to work harder to support you as you lower yourself toward the floor. So, if you train the negative portion of an exercise, it may feel easier, but it pays off dividends when it comes to strength building. (Negatives are also a popular exercise when working your way to a full pull-up.)

The trick is doing negative push-ups as slowly as possible while maintaining good form. Simply start in a high push-up position with your core tight and body straight from heels to head. As slowly and with as much control as possible, lower yourself all the way to the floor. Aim for each negative push-up to take at least four to five seconds.

More: The power ab workout you can do in 10 minutes 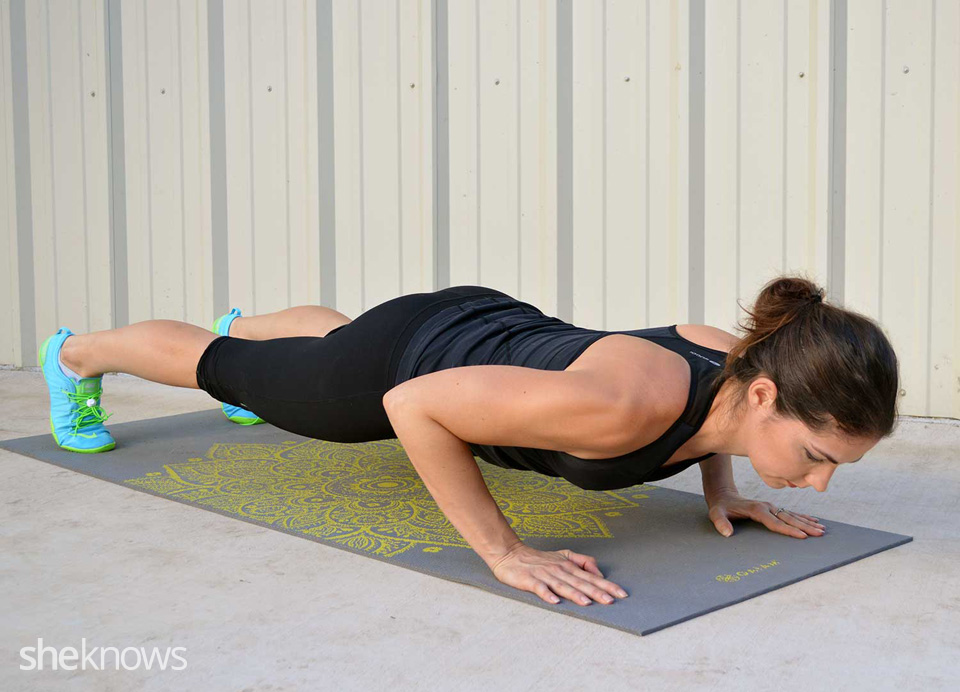 Also referred to as a “Chaturanga push-up,” the lower-and-hold will help build strength during the negative phase of the push-up, while also forcing you to isometrically build strength at the bottom point of your push-up. This bottom point represents the transition from the negative to positive phases, which can be particularly tricky to navigate when you’re learning to master a push-up.

Simply start in a full push-up position, then bend your elbows and lower yourself until your elbows are bent slightly further than 90 degrees (your chest should be a few inches from the floor). Hold this position for three to five seconds before lowering the rest of the way.

As you get stronger, you might want to play with the transition point — hold at the low spot for one second, then bend your elbows a hair more, then press through your palms and raise yourself an inch. Do this two or three times before starting over. 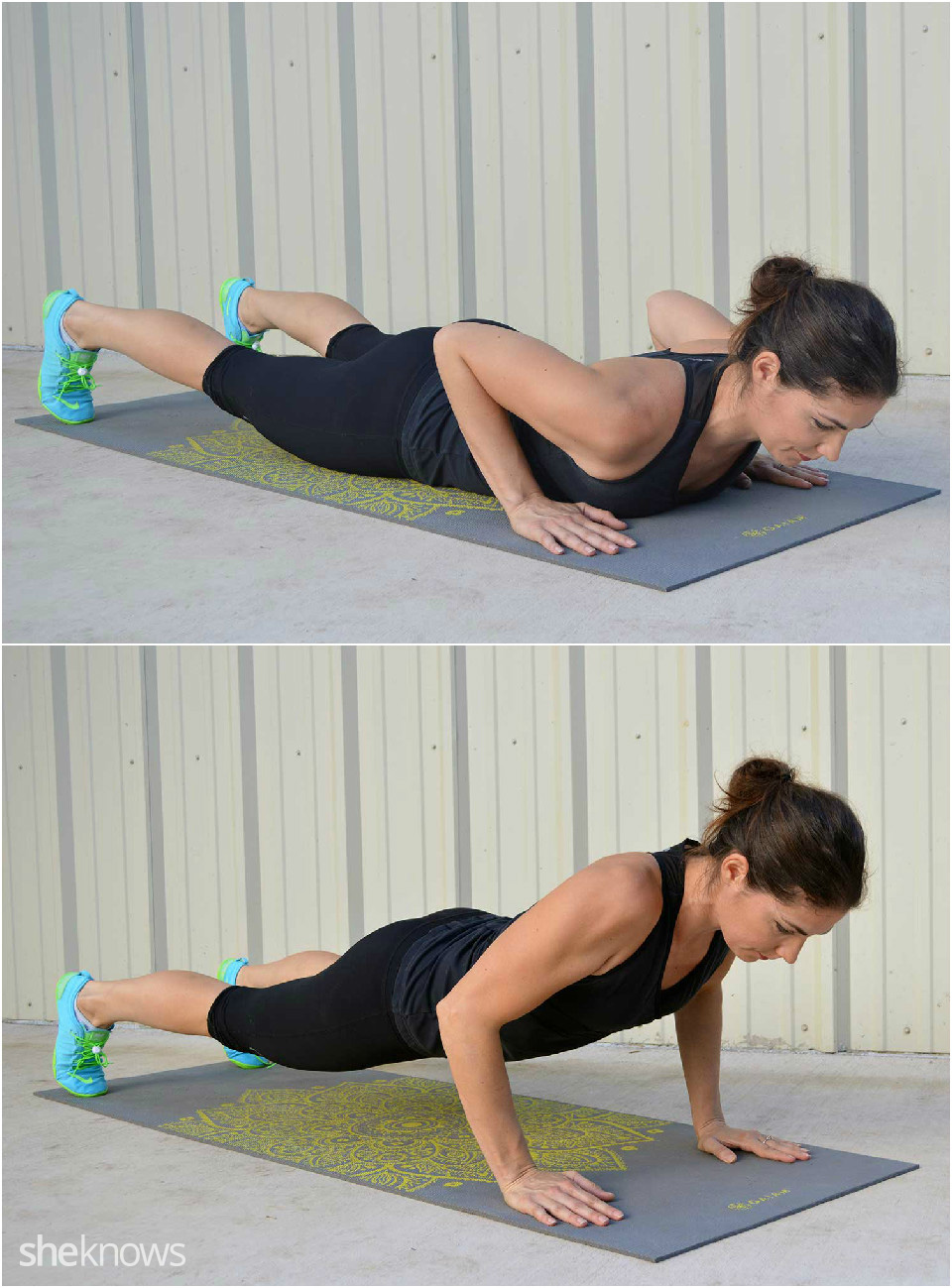 Positives are the exact opposite of negatives. You’re now training yourself to press yourself back up to a high push-up position while maintaining good form. You needn’t do these slowly! Simply start in a prone position on the floor — your palms slightly wider than your shoulders and your toes planted to the ground. Tighten your core and press yourself up while maintaining a tight core, preventing your back from swaying or your hips from pointing upward. 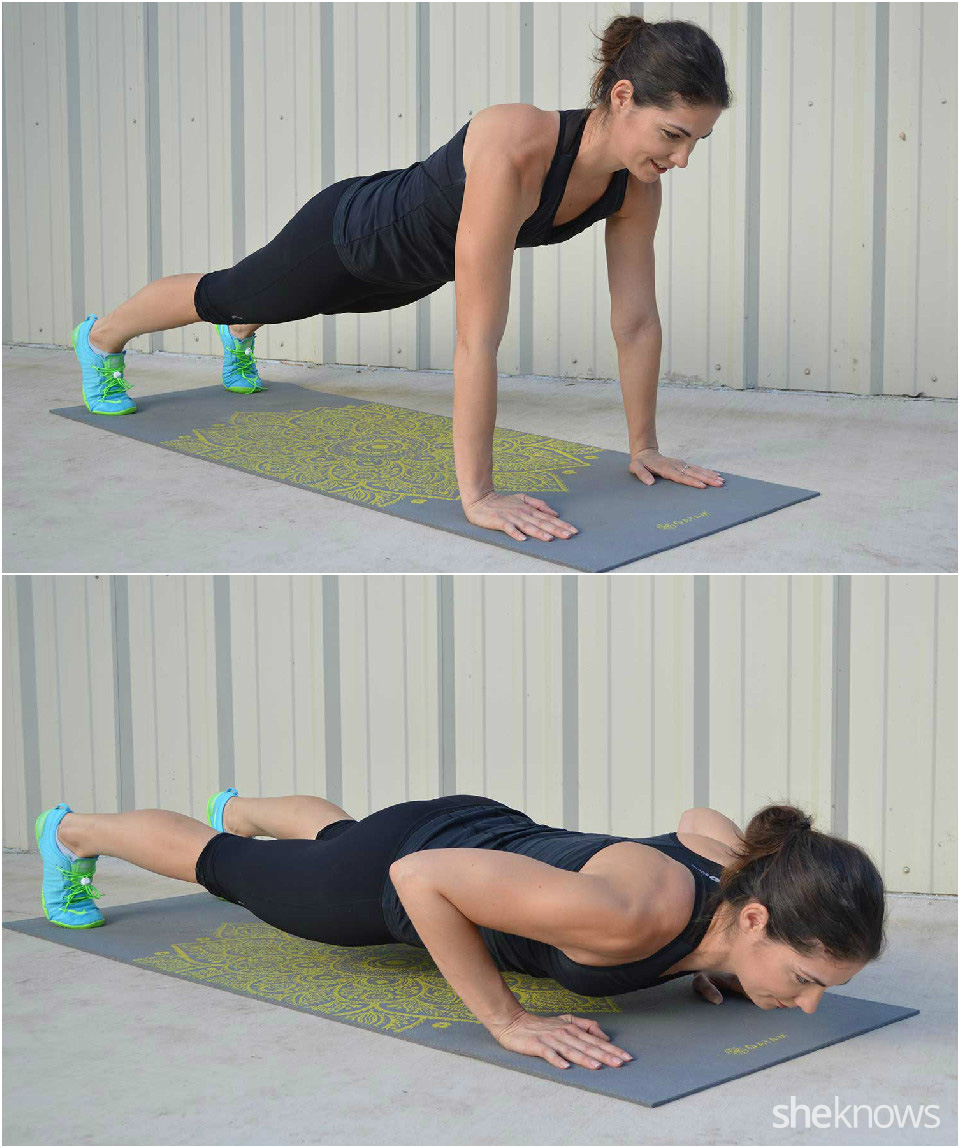 You’re officially ready to combine your negatives and positives. Start in a high push-up position, breathe in and tighten your core before lowering yourself toward the floor. When your chest is a few inches from touching down, exhale and press yourself back up to start. Focus on form first! Even if you can only do one with good form, you’re well on your way to becoming a push-up queen.

19 hrs ago
by Chimére L. Smith