Kara Richardson Whitely would tell you not to judge a woman by her blubber — and for good reason. She’s hiked Mount Kilimanjaro, not once but three times, at 300 pounds.

I’m guessing that all your pre-existing assumptions about overweight women are soaring out the window right about now. And if they aren’t, well, keep reading. “There’s a lot more to someone’s story than the way they look,” Whitley says. It’s something we all know is true, but it can take a great story like Kara’s to drive the point home.

The first time she took on Kilimanjaro, she did it with her husband who she describes as a very athletic guy. “The first time was about losing 120 pounds,” she tells me. “It was one of those ‘yay me’ moments.”

But when she got pregnant with her first child, her old demons returned. Demons in this case also go by the names of binge eating, food addiction and disordered eating. She was afraid to hike, afraid to be a mom, and her body felt off balance, so she fell back on fast food and old habits. In her memoir Gorge: My Journey up Kilimanjaro at 300 pounds, she recalls turning to food as a coping method at a young age — a coping method for an absent father and for sexual assault at 12 years old. She writes, “The pantry became my hideaway.”

“The second time was about ‘If I just went to that place after gaining more than half that weight back, I would be on the right path again,'” she said. Hiking 19,341 feet above sea level is a long way to go for a clean slate, and while Kara didn’t make it to the top her second time, she made it farther than most people reading this article. Then, she started planning trip number three.

“The third time was about doing the emotional work that I had to do to get back on top,” she said. Literally and mentally. She goes on, “A lot of that was about confronting and being out in the elements… having to deal with whatever emotion came my way.” That’s what made her third trip up Kilimanjaro the most powerful.

“That’s something that I’ve taken from the mountain,” she explains, “I couldn’t run to the convenience store to load up on junk. I had to deal with stuff straight on. That alone was worth the trip.”

Not long into her third excursion, she heard a roaring laughter from the other tents. “I couldn’t understand all the words that they were saying but after decades of being bullied and fat-shamed and laughed at, I knew they were saying something not nice about me,” she recalls. So, she confronted one of the guides and learned that they were placing bets she wouldn’t make it.

Then, she did something she’s never done before. “I told him to bet on me,” she said. “I was standing up for myself probably for the first time against someone who was making fun of me and doubting me. I felt like I had to put up with it before. I was so huge but I felt so small and unworthy. So that was really a big turning point for my entire life.”

Three days later, she was at the top of the mountain — an epic way to say “in your face” (my words, not hers).

You see, overweight people aren’t definitively lazy (you can’t tell me three trips up Kilimanjaro is lazy). Everyone struggles with their own sets of issues — skinny, white, brown, black, purple and square people alike. It’s the way a person tackles life when things are hard that speaks louder than anything else, and three hikes up Kilimanjaro is a message pulsing with strength.

“When you look at somebody who’s obese, know that there’s a story behind them and know that they might be trying at they very moment you’re looking at them,” Whitley told me. “They might be saying worse things about themselves than you are thinking.”

Basically, there’s no need to fat shame the next overweight person you see because they’ve probably been doing it to themselves for years, and your snide comments are no magic cure. In fact, they probably make you sound like a dick (my words, not hers).

“You don’t need to coddle people, you don’t need to be hand-holding them, but if you can be in a supportive place, that is the most helpful,” she said. She sums up why fat shaming is not the answer in what might be my favorite quote from our interview: “I noticed that I need to love where I am and go from there.”

Love where you are, and go from there. Write it on your mirror, get a tattoo, put it on a Post-it — I don’t care how you remember but don’t ever forget that. It’s perfect for even the minor-league struggles we all face at some point. Nothing happens overnight, we will never be perfect, so just love where you are and the efforts you make. They just might get you to the top of the highest free-standing mountain in the world. How’s that for breaking boundaries?

You can buy Kara’s Book at Barnes & Noble. 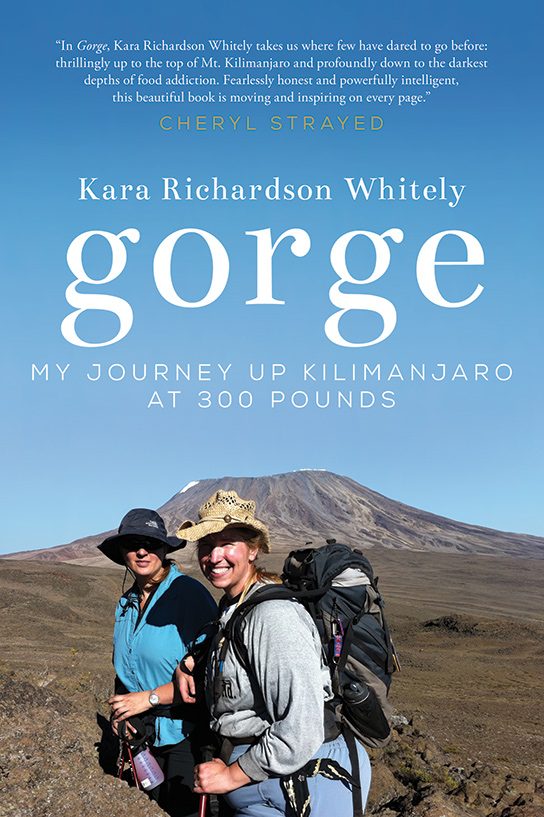