If you haven’t gotten into yoga yet, it might be time to grab a friend’s mat and head over to your local class. Yoga and other pelvic floor-related exercises have been proven to cause orgasms, or “yogasms,” as those in the know call it. It’s also not an anomaly — the number of women who achieve them is around 20 percent, which is rather high considering how many women express difficulty having one in the bedroom. 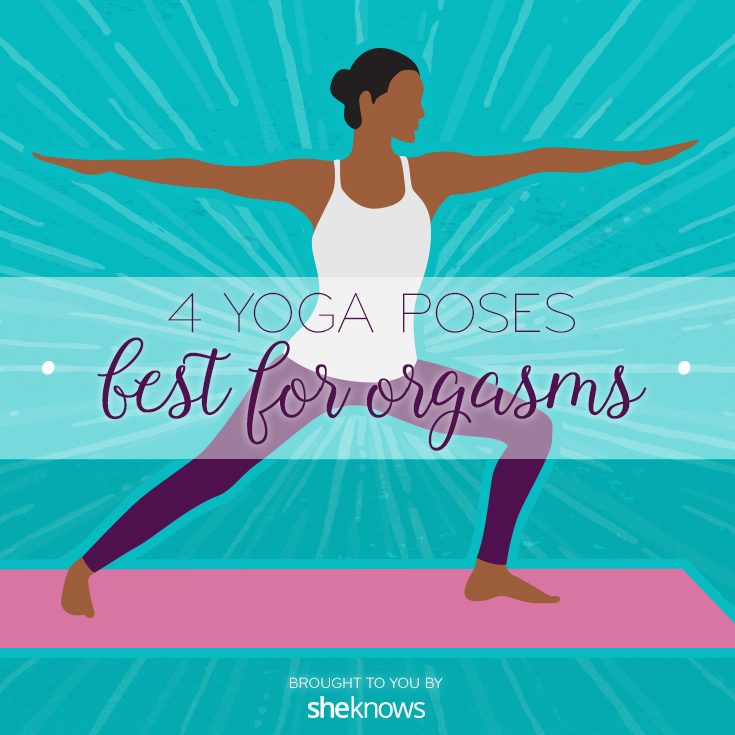 While originally thought of as more of an urban legend than anything else, many yoga teachers attest to having students report yogasms regularly. Zahava Griss, founder of Embody More Love — an organization that focuses on deepening love and passion through various body works, including yoga and dance — has seen it many times firsthand. She told SheKnows it has a lot to do with letting the more cerebral part of your mind go, so you can focus entirely on the body.

“Some of the biggest obstacles in people orgasming is that their mind is preoccupied and they’re not connected to their sensations. […] One of the things yoga and meditation can do is — through having focused breathing practices and asking the body to take on positions that are unfamiliar — it gets the nervous system online and attentive in a different way.”

Zahava says the way you breath during yoga is key if you want to be open enough to experience an orgasm. When you’re in a yoga class, there is significant attention placed on deep and constant breath. In life, we do not breathe nearly as fully and with such attention on the body. The difference in focus can trigger orgasms all on its own because it’s sometimes how the body reacts to such a deepening sensation.

“It’s getting people to breath more. Usually in life when you don’t want to feel something, you shallow your breath. Yoga invites us to deepen our breath, and that inherently invites us to feel more. That’s why people sometimes cry in yoga class. And that’s why it can free up orgasmic energy because orgasmic energy is when we give ourselves permission to feel.”

According to Zahava, and several other yoga teachers, it’s all about putting attention on and opening up your pelvic floor. The best positions for that are the ones that stretch the hamstrings and open the hips. 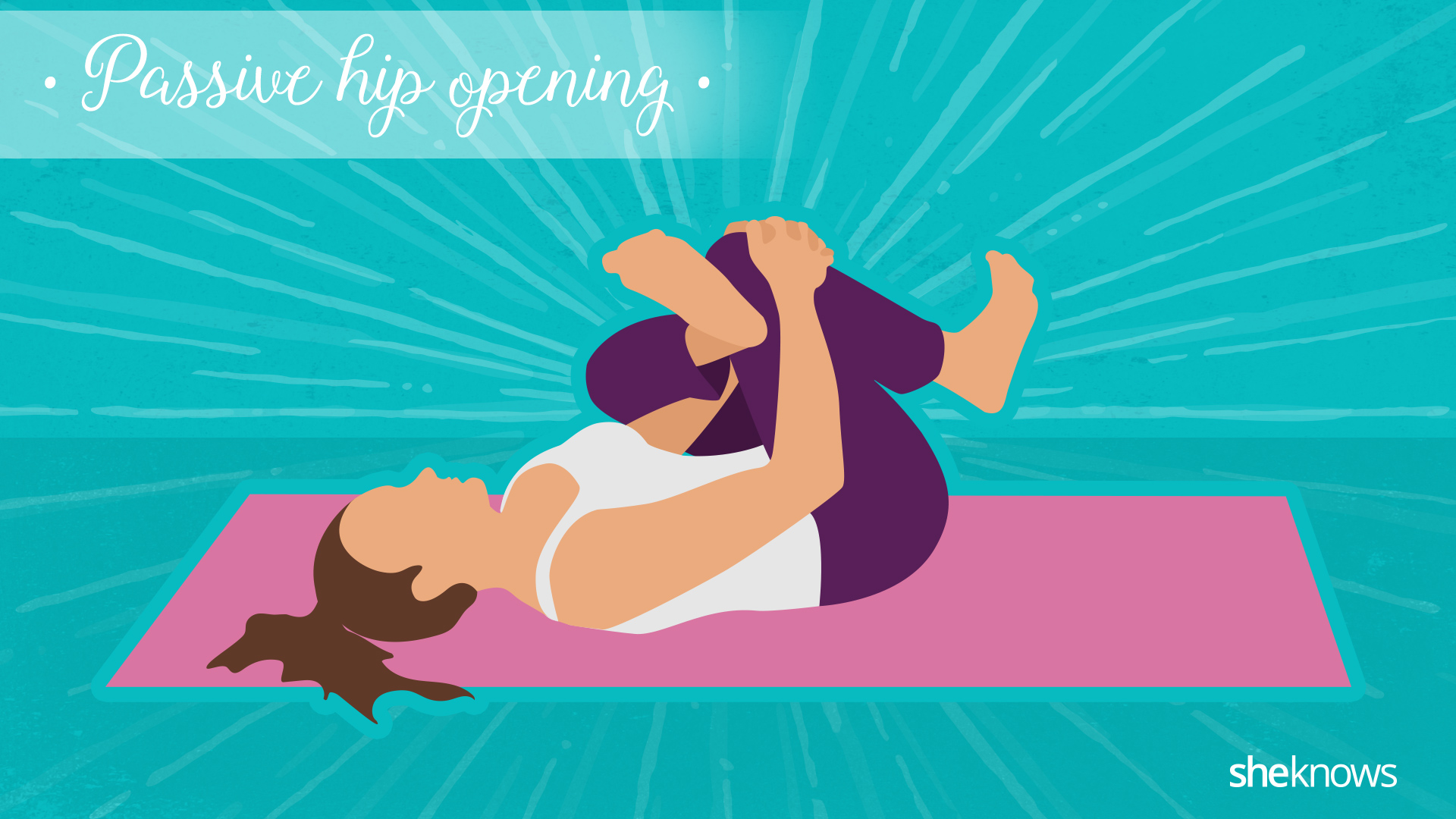 1. “Lay on your back and cross your right ankle over your left making the number “4.”

2. Thread your hands through and gather the legs towards your chest. You’re stretching your external rotators here.

3. If you do it at a wall, you’re using as little muscular effort as possible in the rest of your body to allow as much attention as possible to go to your breath and the sensation. 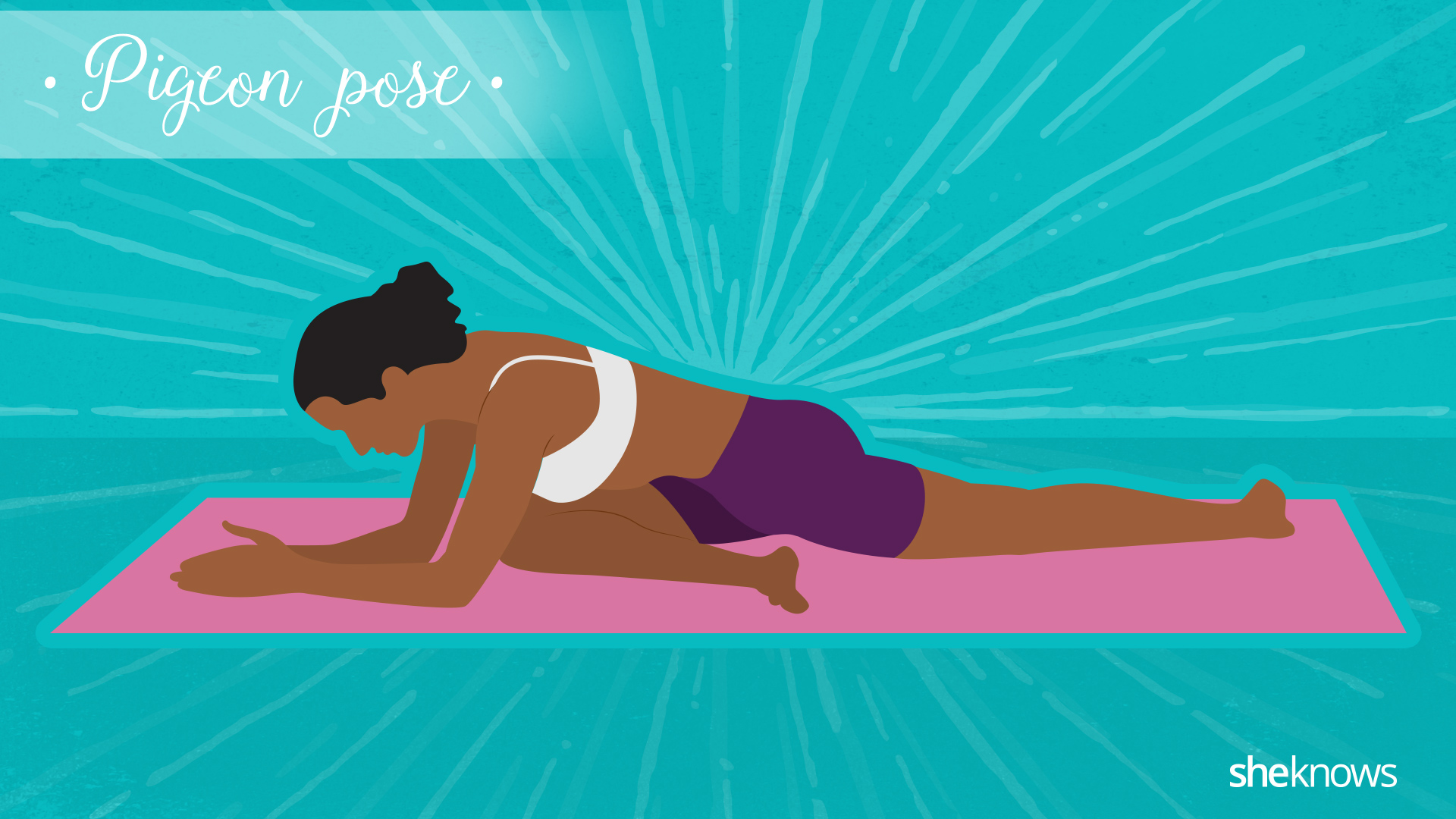 2. Bring your right leg forward until it touches your right wrist, all while keeping your right thigh parallel with the mat. Inch it out until your foot is directly in front of your left hip.

3. Extend your left leg out behind you.

4. Hold until both hips sink equally towards the ground.

5. Fold over your right leg until your elbows touch the floor.

“What I love about Pigeon pose is you can put the heel on the clitoris while you’re in it, or put a bolster or cushion underneath it so you’re getting some pressure and feedback on the pelvic floor while you’re opening up the hip. You can also bring some undulation to the hips while in this pose, which is awesome for releasing the spine.” 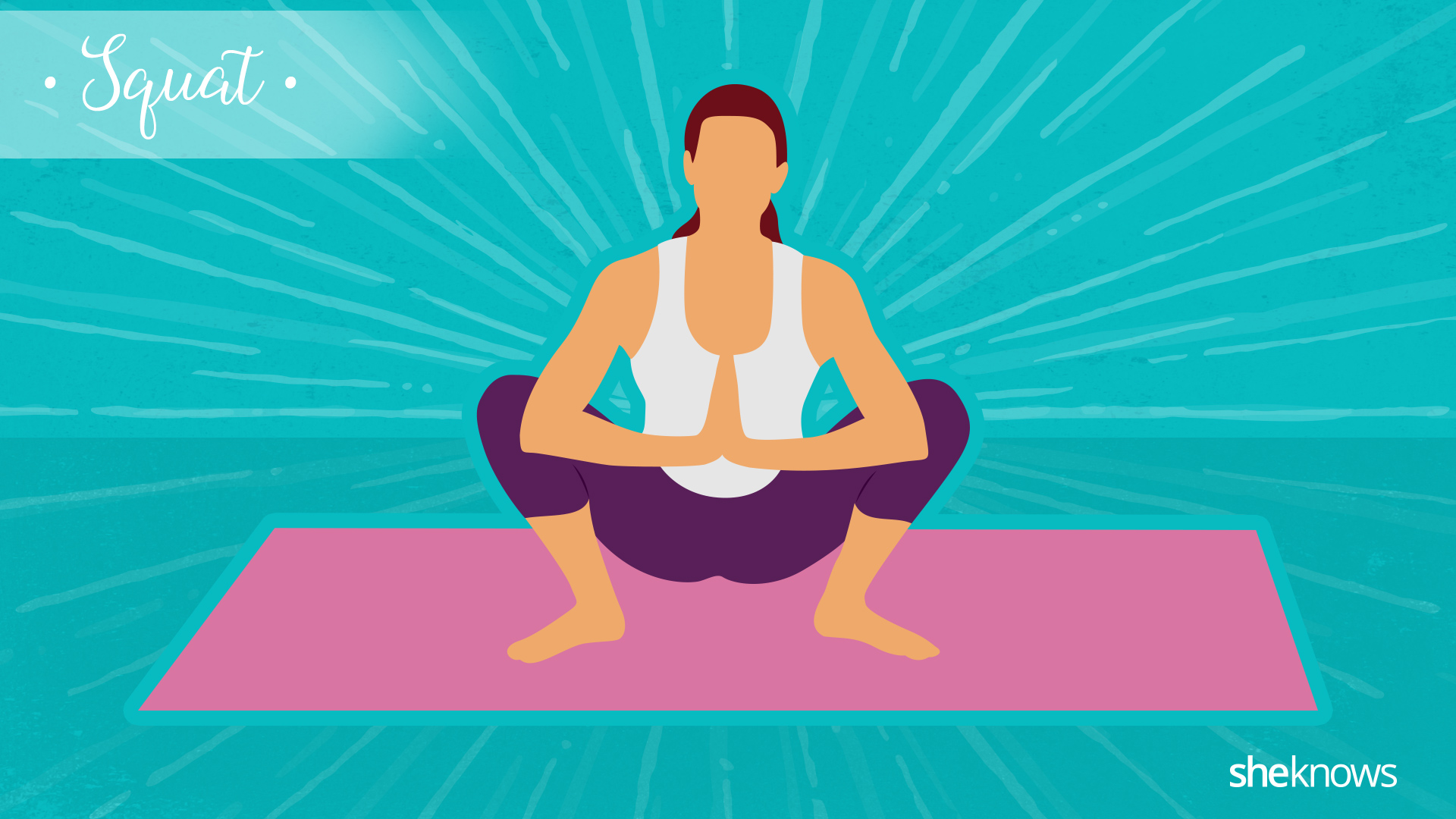 1. Step your feet wider than your mat width and lower into a low squat (your butt may almost touch the ground).

2. Flatten out your heels if you can.

3. Put your hands in prayer at the heart’s center and extend your spine upward.

Squats, in general, open the hips and pelvic floor beautifully. This can boost sexual ability and intensity of orgasms. If you have bad hips, you can do Happy Baby. 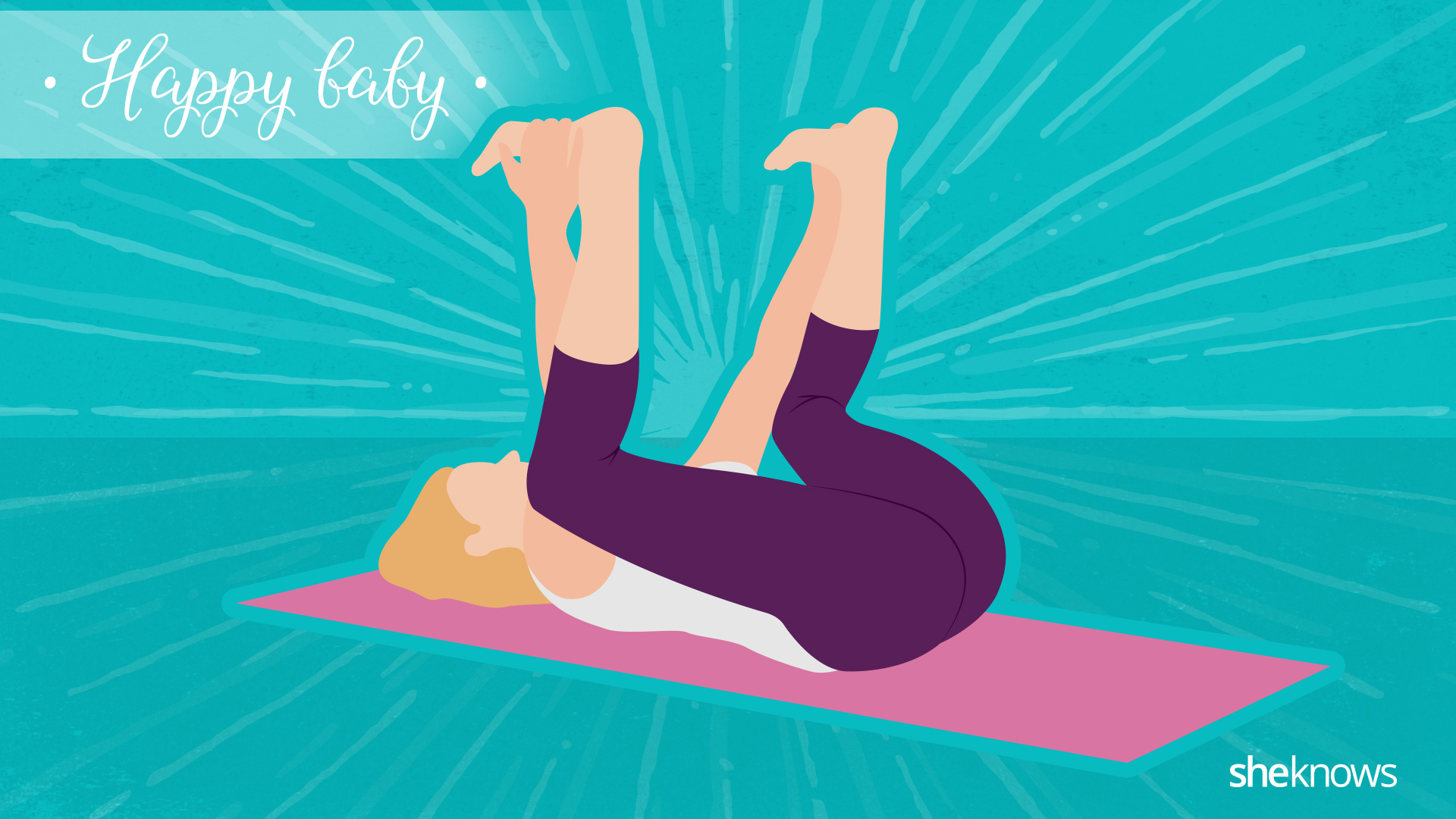 1. Lie on your back and pull your knees in towards your armpits.

3. Gradually pull them down towards the floor.

4. Inhale, filling the belly with air. On the exhale, pull your feet down more and let your pelvic floor flex and open, drawing your tailbone down.

This increases blood flow to the pelvic region, which increases sexual sensations. The deep breath helps release tension, which makes us more open to having an orgasm. Zahava told us, “I also like to think of it as Happy Baby Making pose.”

Deep breathing is the key to being open and relaxed enough to give your body permission to have an orgasm. There’s also something called “fire breath,” which is specifically designed to create energy in the body. According to Zahava, “Deep, deep breath, called Fire Breath, is where you’re actually pumping breath through the belly. You can raise your energy voluntarily by breathing faster and deeper. Then you hold everything in, so you can let it all go. It’s all about learning the containment and floor of energy.”

Sound is also a key factor to letting go. We hold a great deal of tension in our jaw, tongue and throat. Constant vocalization with breath helps flush all that out. Zahava practices chanting in all her yoga classes for this purpose. She feels a lot of yoga teachers emphasize quiet and calm rather than vocal expression in yoga classes, and it ultimately keeps people from reaching an orgasmic release.

“I think if people had a lot more permission to be vocal in class, they’d have a lot more orgasms.”

More: Reasons to take up yoga and improve flexibility

All images by Becci Burkhart/SheKnows