I’ve never been one who enjoys the constrictive nature of clothes. This started at a very young age. When my mom threw me birthday parties as a kid, she’d put me in a gorgeous princess dress that any normal girl would love, and the minute she turned around, I’d rip it off and ride my rocking horse bare-backed. As I got older, I finally agreed to keep my dresses on in public, but would often go commando because feeling the air swirl up there felt better than eating ice cream on the beach.

There’s an unmatchable freedom that comes with letting it all hang out. Just thinking about it makes me long for the time when I could pull my dress over my head in front of everyone and not be judged. But, low and behold, after a little research, I discovered nudity can actually lead to improved emotional and physical health. Told you, Mrs. Lincoln, homeroom really should’ve been naked time.

There have been several studies on the benefits of sleeping naked, and yet according to a national survey, only 8 percent of Americans do it! This was hard for me to come to terms with because aside from the fact that the majority of our nation has no idea how fantastic sheets feel on bare skin, it can help you sleep better, lose weight and even improve your relationship. This got me thinking, if sleeping naked can enhance my life so significantly, what if I spent more time naked on a day-to-day basis? Could it possibly make a difference in just one week?

I spoke with Dr. Fran Walfish, Beverly Hills relationship psychotherapist, author of The Self-Aware Parent and co-star on WE TV’s new show Sex Box, and she thought it was a great idea, as long as my boyfriend (who I live with) was willing to go along with it. She told me, “sleeping naked can be good for your health because it can reduce blood pressure. It can also be a wonderful antidote to stress and depression.” Dr. Fran’s done a bit of naked experimentation herself and said, “the more I walk around naked, the more I become more familiar, more comfortable, and the more things I can like about my body.” All this made me that much more excited to try it out myself.

Thus, began my week-long naked study where anytime I was home, I’d lose all the clothes and carry on life like normal. Here’s what transpired and what you’ll learn if you try it, too.

1. You’ll realize it’s cold without clothes (but only for a bit)

My first day in the buff was definitely an adjustment. I had neglected to consider just how much colder it would be while spending the majority of my at-home time sans clothes. So, that situation needed to be rectified first. I turned the heat on high in every room and made myself into a human ball until it started to get warmer. Once that happened, I felt fabulous. I immediately connected to that naked kid inside — and she wanted to take up as much space as possible. I found myself spreading my body wide wherever I went, which was weird because I honestly thought I’d be a bit demur at first. Nope. Not this guy.

2. Cook bacon at your own risk 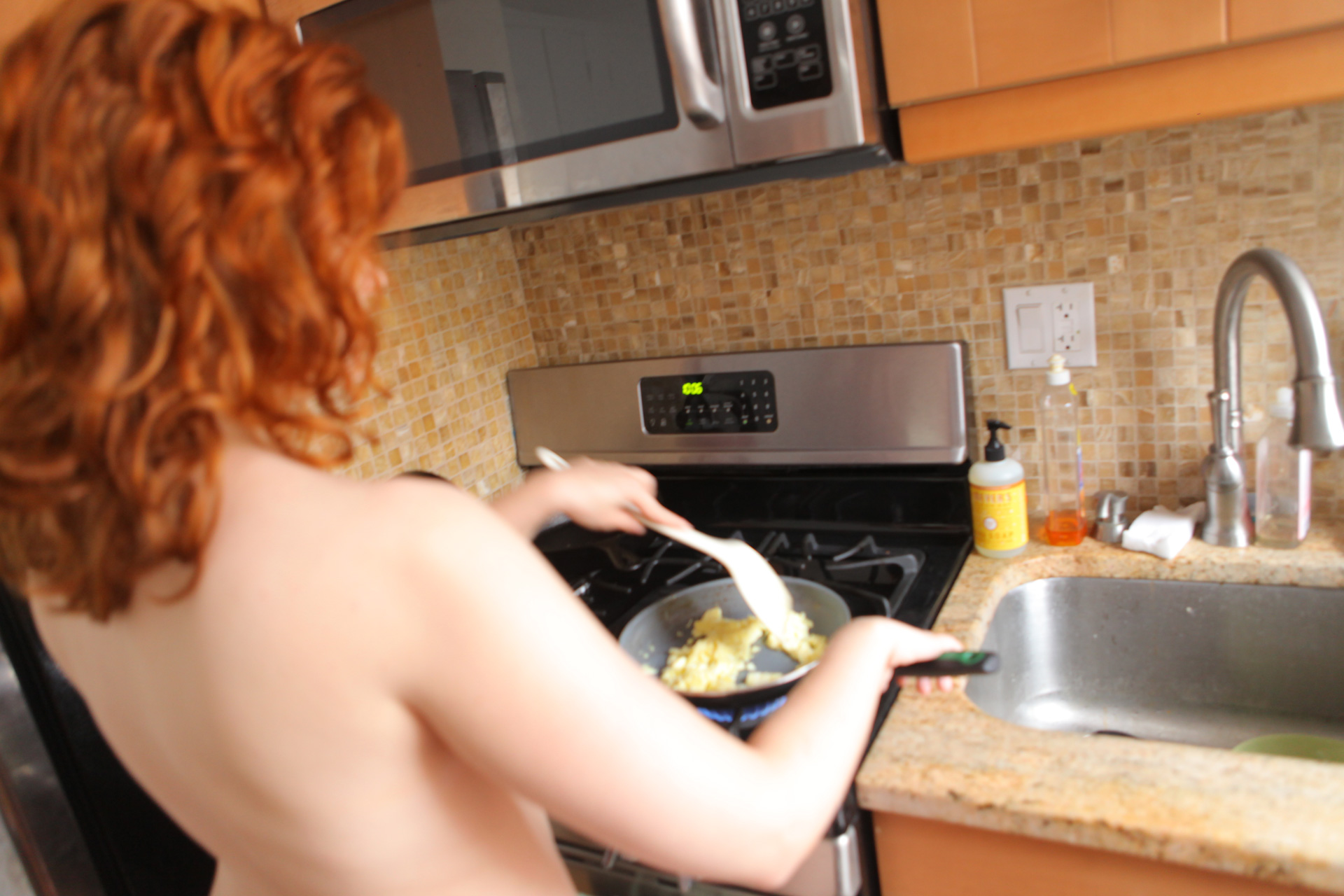 I work from home, and thus had plenty of time to explore this wondrous, newfound freedom. While there were lots of joys I experienced in the nude, there were also several… interesting challenges, one of which was cooking breakfast.

First of all, breakfast foods are known to spatter. And one is never so aware of that fact until one is without the protective barrier of clothing. Needless to say, I had to stand pretty far from the stove, which made flipping bacon tricky. Our kitchen also has a large window facing a school, and this was around the time when all the buses let off kids in the morning. I came up with some interesting dance moves to avoid being seen.

Not surprisingly, my boyfriend (also my lovely and talented photographer) was thrilled that I was doing this experiment. He let me know this often by following me around wherever I went, and even joining the naked club himself. If I learned anything that day, it’s that more nakedness is a big ol’ check in the couple bonding column.

4. You’ll put a metaphoric magnifying glass to your “imperfections”

I have to be honest, by the third day, I was getting a bit frustrated with being naked all the time. I’m pretty comfortable with my body, but soon little imperfections started to bug me, especially because I couldn’t hide them behind a layer of clothing. I focused on dimples that never bothered me before, chicken pox scars I didn’t even know I had and became obsessed with finding and removing errant dark hairs.

To combat these anxiety-producing feelings, I did what I always do: clean the apartment.

5. You’ll feel freer than ever when cleaning 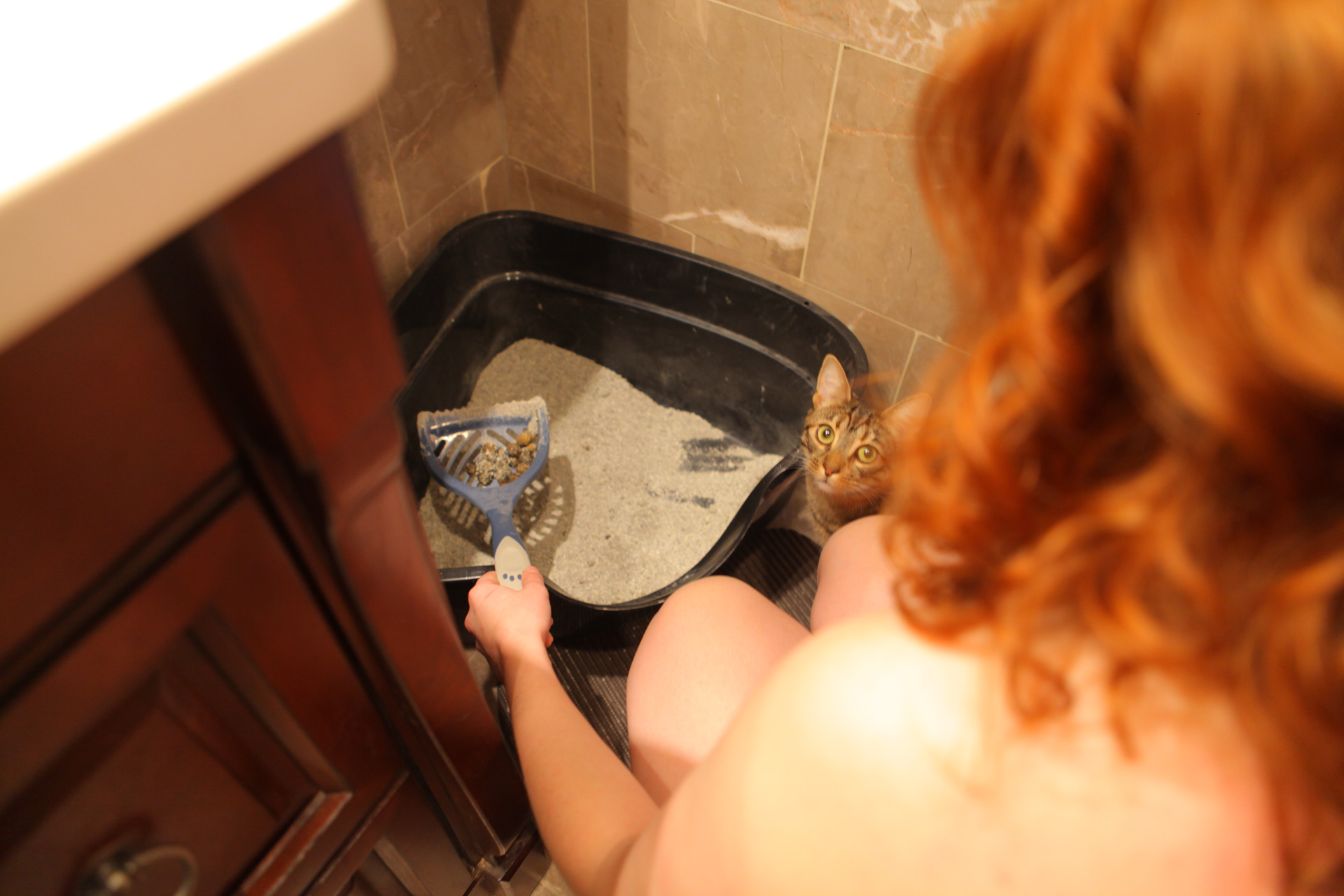 For some reason, doing this naked was very therapeutic for me. I felt like I had more range of motion, and catching my reflection in our glass shower and mirrors with just my rubber gloves on never failed to make me chuckle. I also became a bit of an exhibitionist while cleaning the windows. Really did not think that was an aspect of my personality, but there you have it. And FYI, cleaning the litter box naked isn’t that gross.

6. Something will try to come between you and your naked time, but persevere

I had to leave the comfort (and warmth) of my apartment and head to New Jersey for “family time.” At first, I had no idea how I was going to squeeze any naked time into that day because while they’re pretty chill, I didn’t think my parents would be comfortable with me traipsing around their house naked. But, thankfully, they ran out to do some errands, and I quickly disrobed to experience being naked there. Now, this was fun because I felt like I was breaking the rules, and there’s nothing like being naughty when you’re naked. 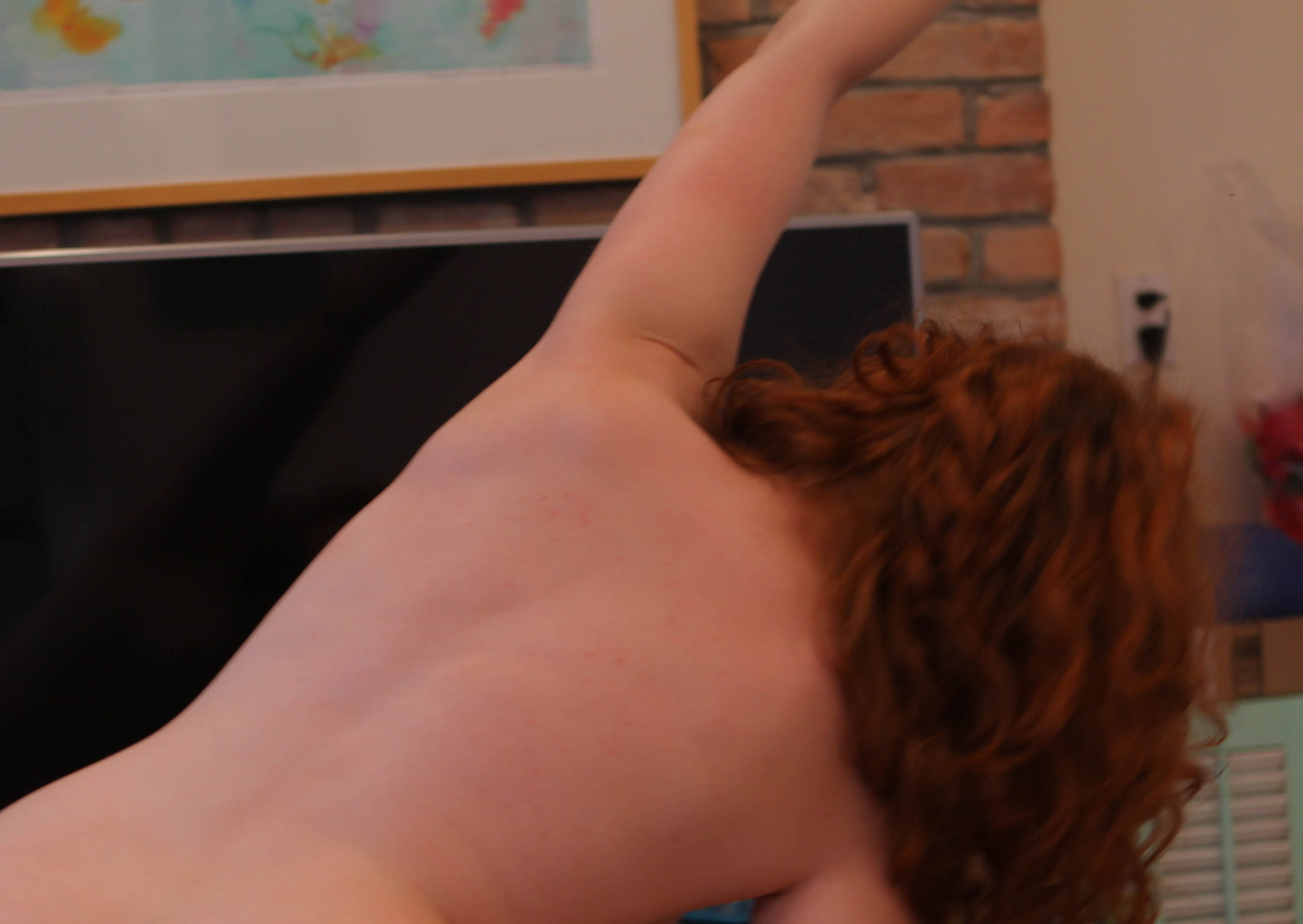 I had been pushing off exercising naked because I was nervous about feeling my wobbly bits more intensely than I do in clothes. But, man, do I wish I hadn’t, because working out naked is awesome.

I felt stronger, less vulnerable and sexier than I had in a long time, and that feeling lasted the rest of the day, which apparently is no coincidence. According to Natasha Turner, author of The Hormone Diet, being naked actually can make you look sexier. When you’re naked, your body temp drops, and “as your body temperature drops, growth hormone is released and works its regenerative magic.” AKA, your cells regenerate faster and you look fresher. 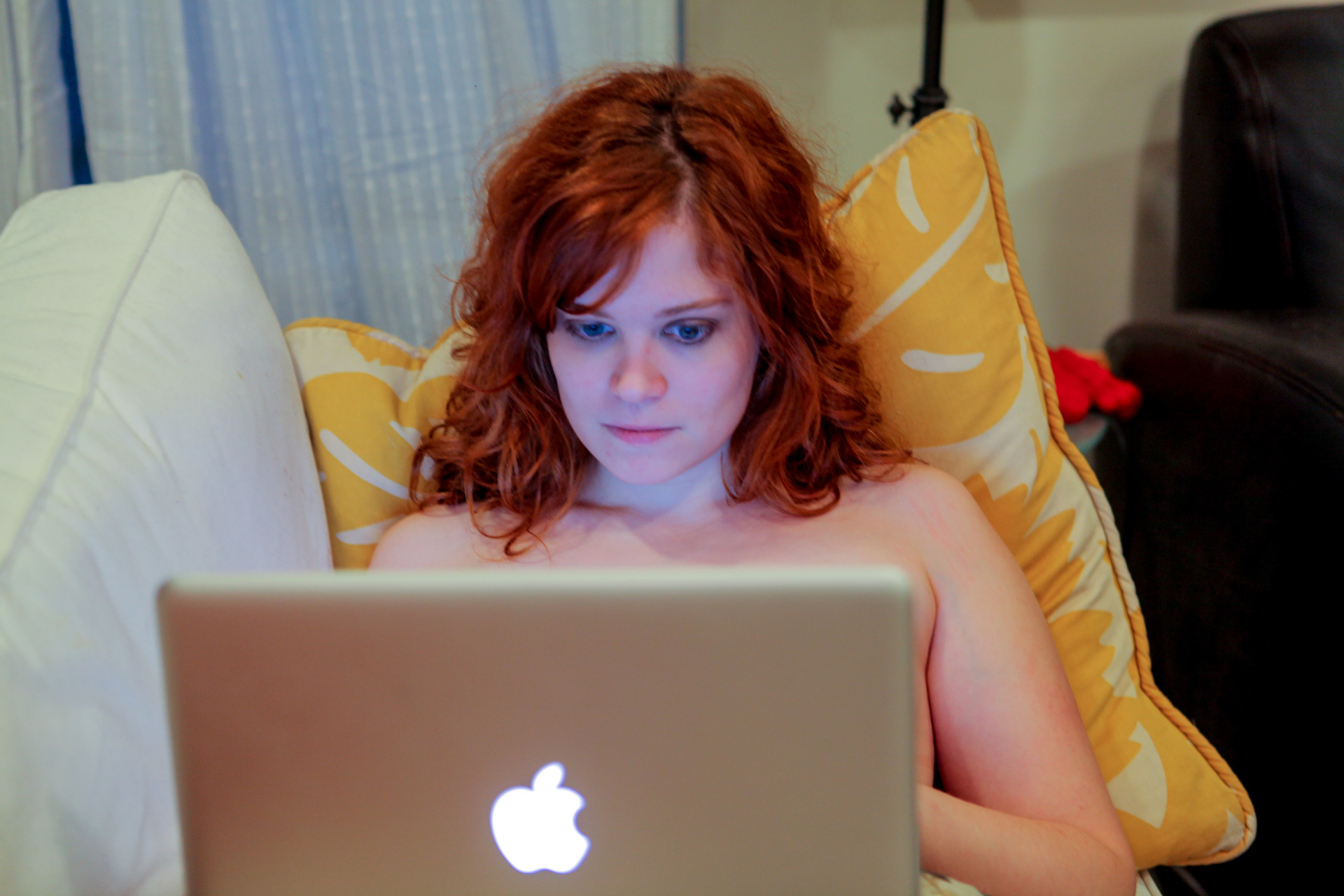 I was legitimately sad when I reached the end of my experiment and had to return to a life of wearing clothes (how droll). But then I realized, I don’t have to do that at all! I can do this whenever I want because I’m an adult, and I say every day can be naked day! By the end of the week, I was feeling so much more confident about my body. I think I may have even lost some weight because it didn’t feel so good to be ridiculously full while naked.

All in all, nakedness is good. And I highly recommend it if you want to feel better about yourself, your relationship and your cleaning habits. However, if you decide to try prolonged naked time and you’re going to cook bacon or trim your cat’s nails, proceed with extreme caution.

Loving my body is a battle, but I will win it without thinspiration
Yoga is about more than $80 leggings and trendy tank tops
15 Quotes for any woman who hates her body