Even Victoria Police likes a good romance story and has put out the call to find the owner of a wedding ring that was found in bushland in Glen Waverley, Victoria.

The ring has the words, “I love Julie”, engraved inside, along with the date 2005.

“Glen Waverley police are hoping that love is not lost — even though the ring appears to be,” a spokesperson said in a media release in the hope of finding the wedding ring’s owner.

“The ring is silver with a single diamond and appears to be a man’s wedding ring judging by the size.” 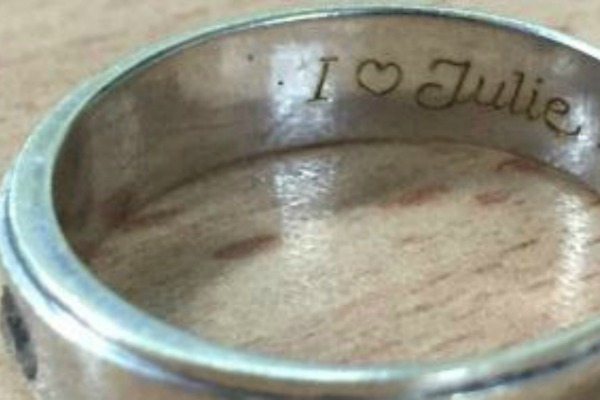 A member of the public came across the ring and handed it in to the police station. But since the police department put the call out, the internet has gone crazy with wild suggestions about how poor Julie might react to her partner losing his wedding ring.

One woman worried about the real reason the ring might have been discarded:

Another wondered why the ring was left there in the first place:

“She probably cheated on him so he threw it out… or he could of been drunk and threw it out the window (sic)?” said Pasi.

While many a Julie took the opportunity to look for love:

“I’m here if someone’s looking for me!” one Julie said.

“I have a secret admirer,” said another.

But thoughts were generally with whoever the husband was, knowing that he’d be in some serious trouble for losing his ring:

What do you think? Do you know who Julie is? Share your thoughts in the comments section below.

Aussie sayings are taking over the internet, here’s a dictionary
Julie Bishop asked if she’d free the nipple during Q&A
Dance show Nothing to Lose celebrates plus-size women and we love it