It seems there’s a rising trend in the world of proposals, and that is the oh-so-cute proposal flip-book. While I admit the idea of using a personalized, animated flip-book to pop the question is adorable, having one made for you by a flip-book company feels a bit uninspired to me. But I’ll let you be the judge.

The company making these things is called The Flippist (clever), which is run by the super talented artist Ben Zurawski. What he’s offering is essentially a much more personal (and interesting) greeting card which he custom designs just for you and the occasion in question. You can have them made for any event, but lately, his proposal flip-books have been getting the most attention. However, as you may have guessed, you’ll be paying much more than $5 for these babies.

According to Zurawski’s website, “custom flipbooks start at $495, and vary depending on complexity and deadline.” However, he is open to working with clients if the price is too steep for them. “Let me know any budget restraints and I’ll do my best to work with you. Don’t have money but have a crazy unique item or experience to trade? I’m open to fun stuff like that…try me! Send my wife & I somewhere cool!” So the guy who will be doing all the creative thinking for you when it comes to your marriage proposal sounds pretty decent, right?

Ben posts all his flip-books on YouTube to help promote his business, and recently, one that was used for a ridiculously hipster cute wedding proposal started to go viral:

Undeniably adorable, right? I mean, I don’t think I’d be thrilled with my fiancee-to-be sticking a camera in my face in the middle of proposing to me, but I suppose I’m a bit of a traditionalist. Another one that recently received a ton of attention is this Chicago couple’s whose proposal took place during a wintry stroll through the Lincoln Park Zoo:

As you can see, both flip-books are entirely unique, and, aside from Zurawski’s signature animation style, the actual proposals look as different as night and day (not just because one took place at night while the other happened during the day). So yes, I agree that the idea itself is clever, but is this what we do now to mark one of the most pivotal moments in our lives? Pay someone else to do the creative thinking for us? I personally think it’s a bit of a cop out.

Perhaps I’m old-fashioned, but I believe such a moment should be marked by an event that is as unique to you as your relationship is with each other, even if that means it’s filled with awkward bumps (as mine most definitely is). It’s those bumps that make for the best memories, not some expensive flip-book you paid someone else to make for you. With that in mind, here are some of my favorite DIY proposal ideas in which you can inject a good deal of your own personal flare.

1. If your intended is musical… 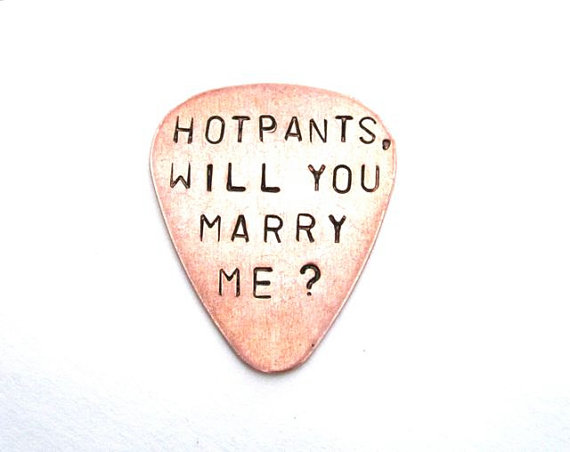 In love with someone who’s always got a guitar in their hand? This simple yet creative proposal idea might be just the thing. You could write them a love song (it can be super basic if you yourself aren’t that musically inclined), and play it with this pick — which incidentally you can order from Etsy with any personal message you want. Sweet, just for the one you love, and may be filled with musical mess-ups if guitar-picking isn’t your first language. But remember, it’s the effort that will be remembered…well that, and the nervous laughter that will come from forgetting to tune the thing beforehand.

If you and your love are nature enthusiasts, this one could be the perfect fit. This couple had a history carving their love in trees, so it was a pretty natural proposal idea for them. What’s great about using a tree as your canvas is you can get quite creative. You could carve a favorite quote, or create a path of marked trees that your intended has to follow to find a proposal. My favorite idea is hanging pictures and trinkets that are meaningful to your relationship, and hiding the ring (or whatever you choose to use to seal the deal) in a knot in the wood. Just keep a lookout for squirrels — they love to steal shiny things, and that would not be the best ending to a marriage proposal. 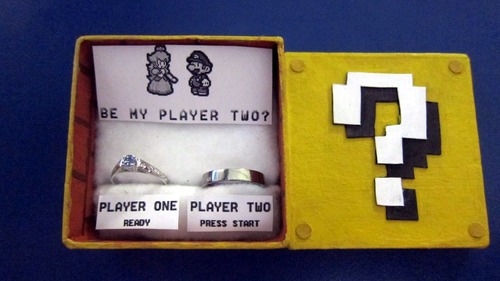 Okay, this one I love, not only because it’s the perfect analogy for marriage — asking to start the game of life with your partner — but because it appears to be a lady asking her dude which is sadly still pretty rare. If you two are gammers, you could choose to utilize characters in your favorite game, and if you have tech-savvy friends, have them help you design a little game just for you two, where the finish line is the proposal!

So my favorite season is totally Autumn — I love pumpkin carving, changing leaves, and apple cider anything. If your love is all about a particular season, why not take a signature aspect of that season, and turn it into a proposal? The one above is pretty awesome, but definitely labor intensive. If he/she’s more into Spring, you could get bunches of their favorite flower and spell out “will you marry me?” in an obliging field, then take a little stroll and just happen upon it! However, make sure you’ve got a lookout, otherwise it could be ruined by an unknowing soccer game, or wind.

Is your loved one all about the caffeine? Can he/she not make it 10 feet out of bed without reaching for her trusty coffee mug? Why not have something like this waiting for her/him? While there are ones like this ready made for you (and available for customization on Etsy), you could take it a step further. Find a local pottery studio, and sign up for a class. You could actually come out with something pretty cool and unique that again, even with imperfections, will be an unforgettable memento. You could be super suave about it too. Be like, “hey babe, I made you this mug in my pottery class,” then watch them drink from it to get to the surprise message. Just don’t put the ring at the bottom. Coffee stains are a bitch to get out of diamonds.

Best romantic movies for when you want him to propose
This guy proposed to his girlfriend with a painting!
Romantic holiday proposals to make you believe in true love again